This anime season includes a pair of titles that feature some rather… unique characters. Both Monster Musume and Actually, I Am include a handful of normal humans, but the majority of their casts are made up of aliens, vampires, centaurs, and other fantastic creatures. When a pair of shows use monster girls as a primary selling point, there’s only one [Read more…]

I recently picked up the tenth volume of Black Lagoon, the first installment of the deceptively clever action manga to be released in quite some time. Despite the lengthy hiatus between books, I had no trouble jumping back into the bulled-riddled city of Roanapur. That’s a fairly impressive feat, and it inspired me to take a closer look at how [Read more…]

It’s been a couple weeks since I traveled to Anime Expo, which means I’ve had a chance to gather my thoughts about this enormous monster of a convention. So, for This Week in Anime, I thought I’d assemble some of those musings into a vaguely coherent article. The good news is that you don’t have to stand in line for [Read more…]

Welcome to This Week in Anime… or not. There’s no column this week because I’ve been busy preparing to attend Anime Expo. Expect a a much bigger article than usual next week, complete with news and witty observations from the convention!

Ensemble casts pose an interesting challenge, both for anime and for fiction in general. When they work, they work incredibly well. Having a rotating group of star characters opens up a variety of story possibilities and saves any one individual from having to carry too much of the show’s weight. The hard part is convincing the audience that they should [Read more…] 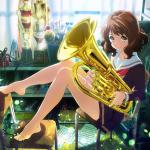 Man, this has been a rough season for anime. We’ve had one or two really strong shows, a few decent ones, and an awful lot of vaguely promising titles that have run out of gas several weeks early. One of the stronger occupants of the middle category is Sound! Euphonium, the latest “cute girls play musical instruments” series from Kyoto [Read more…]

One of my favorite parts of watching and writing about anime is occasionally finding myself at a loss for words. Every once in a while, a series comes along that’s unique and crazy enough to leave me unable to do anything but mutter, “What the heck did I just watch?” This season has provided exactly that kind of experience courtesy [Read more…]

While working on a review last week, I found myself thinking that I would’ve enjoyed a particular series more if I’d watched it five or ten years ago. The thought came and went at the time, but it eventually got me wondering about how where we are in life influences our response to fiction. Everyone loves The Great Gatsby in [Read more…]

One of my favorite shows of the new season has been Ore Monogatari!!, which runs as My Love Story!! here in the US. It’s not especially original or innovative, and that’s kind of the point. In a medium that so often relies on gimmicks and melodrama to sell romantic stories, it has the guts to just tell a story. In [Read more…]

With the promising underdogs out of the way, it’s time to get to the real contenders: the shows that should be the big talking points for this anime season. While we’re a long way away from winter’s absurdly strong lineup, there are still some compelling new titles out there. So, without further ado, here are three shows that should be [Read more…]