Man, this has been a rough season for anime. We’ve had one or two really strong shows, a few decent ones, and an awful lot of vaguely promising titles that have run out of gas several weeks early. One of the stronger occupants of the middle category is Sound! Euphonium, the latest “cute girls play musical instruments” series from Kyoto Animation. So, how has this mostly harmless slice of nostalgia kept rolling while so many of its contemporaries have gone up in smoke? 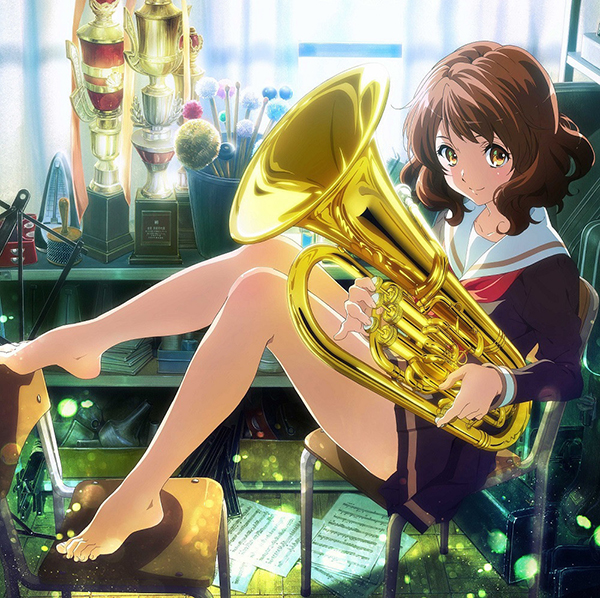 One thing Euphonium has going for it is simple, believable storytelling. It doesn’t overextend itself trying to revolutionize the genre or spin a shark-jumping tale of normal people pulling off an impossible feat. At its core, it’s a story about a bunch of high school band geeks who decide that they don’t want to suck as much as they did last year. With a new conductor and some talented first-years to motivate them, everyone practices and gets a little better. Along the way, individual members of the band get into the sort of petty, self-important squabbles that are included in the package deal with teenage life. It’s the kind of story that can and does happen in real life, and going down this route means that the show doesn’t need to jump through any awkward plot holes to make it all work.

Kyoto Animation has done modest slice-of-life shows before, but Euphonium continues to surprise me with the strength of its characters. Compare it to K-ON!, another KyoAni series about teenagers in a music club. Both do a fine job of capturing the thrill of performing in front of an audience, but K-ON! has been rightfully criticized for having impossibly cute and pleasant heroines. Euphonium, on the other hand, features a lineup of believably flawed characters. For all her charisma, Asuka can’t be counted on to help sort out drama between band members. Reina only cares about being the best, and is happy to let the rest of the world burn as long as she accomplishes her own goals. Even the seemingly flawless music teacher isn’t as good at his job as he first appears to be. These characters are all human enough that he script can just throw them into a room and let storylines develop naturally.

It also helps that Sound! Euphonium is a wholesale distributor of nostalgia. I never played in any sort of school band, but even I find myself getting caught up in its broad portrait of high school life. The modest highs, softened lows, and occasional moments of insight work together to make the viewer look at the past through rose-tinted glasses. It all but demands that we see ourselves, our friends, and our old rivals sitting in the practice room. Playing on audience nostalgia can be a bit of a cheap trick, but this show is damn good at it.

Is this the series of the year? No. It is, however, a fine example of how to sneak a story and some character development into a slice-of-life series. In spite of its relative simplicity (or perhaps because of it), Sound! Euphonium has been able to keep on trucking long after many of this season’s shows have completely run out of ideas.