Starting anew sure is hard.

I think you can understand where I’m coming from, since you know I had to take a long hiatus from writing The Minus World for the past couple of months as I started working full-time. In the beginning I put in long and stressful hours, and I often doubted whether I was even capable of effectively producing the local evening news two times a night, five nights a week. Heck, I still feel that way sometimes. But I have made progress in my work and am much more capable now than I was two months ago, which is why I finally have the time to return to writing this column, which I am indeed proud of.

But the hardest thing about this job isn’t the job. After returning home from my last semester of college and finally feeling comfortable living in New Hampshire again, I was suddenly whisked away to northern Vermont. I’m now living up here, alone, without any close friends to keep me company. And that is the most challenging part of starting any career.

I quickly grew desperate to leave my apartment and do something on the weekend that I knew I would enjoy. As if I received a calling from above, I had my chance just a few days ago. A typical story idea e-mail from my newsroom assignment editor tipped me off to an anime convention happening in the Burlington area, Bakuretsu Con. I was nervous about going to a convention on my own, since I had always gone with friends. But I knew I had to go. Even if I didn’t meet anyone, I reasoned, I could at least wear one of my cosplays, play in some video game tournaments, and get a few Streetpasses on my 3DS. At least I knew I could not possibly walk away from this convention empty-handed. 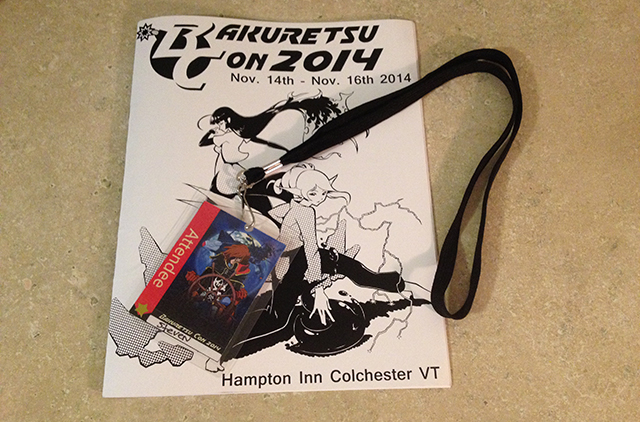 Once I got past that initial anxiety, this convention turned out to be much like any other one I went to, albeit a lot smaller. Bakuretsu Con takes place across three floors of a Hampton Inn. Exhibition halls and meeting rooms are rented out for panels, merchandise booths and a gaming lounge. Some hotel rooms are even rented and utilized too; one room housed the con’s manga library, for example.

Despite the size, I felt the same sense of community that every other one of these events has given to me in the past. The event coordinators and panelists especially made this feeling possible. One Bakuretsu Con admin moderated the weekend’s several video game tournaments; he was very welcoming and incredibly entertaining (the Mario Kart 8 tournament on Sunday would not have been nearly as exciting without his commentating on every race). A local community college student held a panel on video game music that actually led into some intelligent and thoughtful discussion on a subject I am very passionate about. Her panel, at a tiny convention of no more than 450 people, was infinitely better than OverClocked ReMix’s panel at PAX East earlier this year, which only amounted to a shameless sales pitch and a Shaq-Fu tournament. Every person I interacted with at Bakuretsu Con was incredibly passionate about the gaming industry. It felt good to have such passion go into events from both the coordinators and the fans, after months of being deprived of the chance to celebrate nerd-dom.

It may take some time before I join a new social circle living in a new place, but mustering up the courage to leave the comforts of my apartment this weekend to attend a convention on my own was in every way worth it. It was a solid reminder to me that, no matter where you are in this world, there will always be a place to geek out. There will always be a place where you can meet people who share the same passions as you, from video game music to Mario Kart and Pokémon. And whether you’re at Anime Boston, GameDays, PAX East, IndieCade or even little Bakuretsu Con in Colchester, Vermont, you are no stranger. You will always feel welcomed when you’re in an environment full of passionate gamers, comic book nerds and anime fans. You will always feel part of this community, a community that truly stretches from coast to coast.