In recent years, driving games have embraced a jack-of-all-trades attitude.  You’ll sell more copies if you can be everything to everyone, or so the thinking goes.  Start with an enormous range of vehicles, tracks, and game modes, and add on an array of assists that allow players of any skill level to enjoy the game.  The result is a huge amount of content for the money, but this approach also brings a lack of focus.  In a genre dominated by titles that do everything reasonably well, it’s nice to see the occasional game that does one thing perfectly.  In the case of Trials Fusion, that one thing is best described as “doing crazy stuff with motorcycles.” 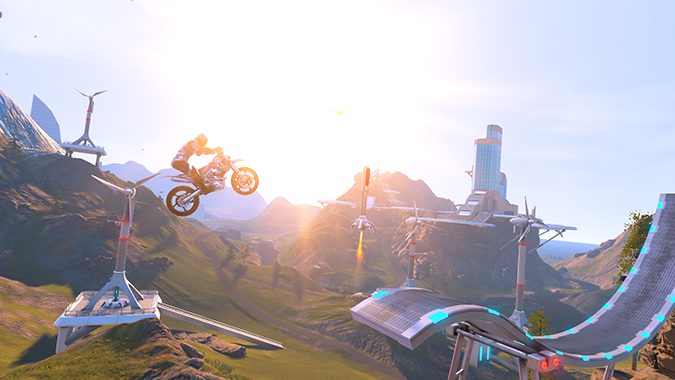 The latest entry in the acclaimed Trials series, Fusion remains true to the franchise’s basic formula of guiding motorcycles through increasingly difficult obstacle courses.  Through careful application of the throttle and precise control over the rider’s ability to lean forwards and back, players engage in a wonderfully absurd combination of racing and platforming.  As in previous installments, the difficulty level progresses gradually from rolling hills and majestic jumps to rage-inducing exercises in mandatory perfection.  Few series are as capable of conjuring up profanity from even the most patient gamers, and even fewer can do so while remaining fun and addicting.

Trials Fusion does add a few new elements to the franchise, including a score-based trick mode and a four-wheeled ATV.  Controls for the mid-air stunts can be somewhat finicky, but the events offer a nice, occasional change of pace from the rest of the game.  The four-wheeler is remarkably entertaining, as its handling differs significantly from that of the bikes.  While I’m happy to see it added to the game, it’s a shame that it can’t be used on more of the single-player levels. 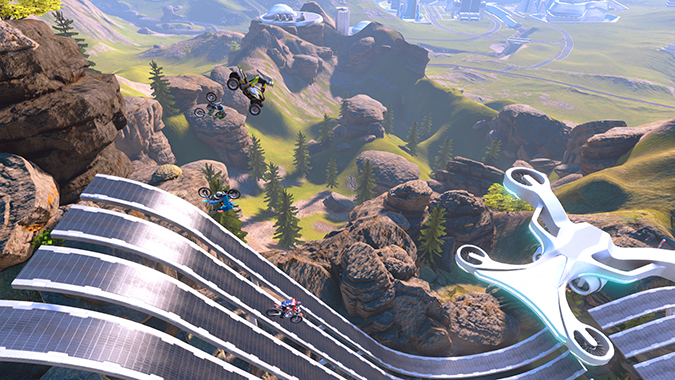 The visual spectacle of Trials Fusion is a notch above its predecessors, thanks to a combination of improved graphics and a welcome dash of bright colors.  Two announcers bring some Portal-style humor to the game, but it would be nice not to hear their lines repeated every single time I restart a level in pursuit of a faultless run.  User-generated tracks are back thanks to an expanded level editor, and the community hive mind has already put out some genuinely impressive creations.  Multiplayer races also make a return, and remain an absurd amount of fun, especially if you can get four players together in the same room.

Trials Fusion does a fine job of carrying on the physics-based gameplay and controller-throwing difficulty that makes this series so special.  A multi-platform release opens the franchise up to a wider audience, and newcomers and veterans alike will get plenty of entertainment out of it.  When it comes to doing crazy stuff with motorcycles, Trials stands alone.