Many gamers can recall the first day they played a new title.  The excitement of playing an A-list release on day one has a habit of staying in our memories, as does the joy of finding a sleeper hit in the bargain bin.  What’s often less memorable is the last day of a game’s lifespan.  Unless it’s an epic rage quit or a soaring triumph of 100% completion, we rarely remember the last time we play a game.  It’s often an ordinary experience, a few matches in an FPS or a mundane sidequest in an RPG.  No matter how good or replayable a game may be, there always comes a time when we simply stop coming back.  It’s as true for racing games as it is for any other genre, and it’s something that developers have long tried to postpone by releasing new content after launch. 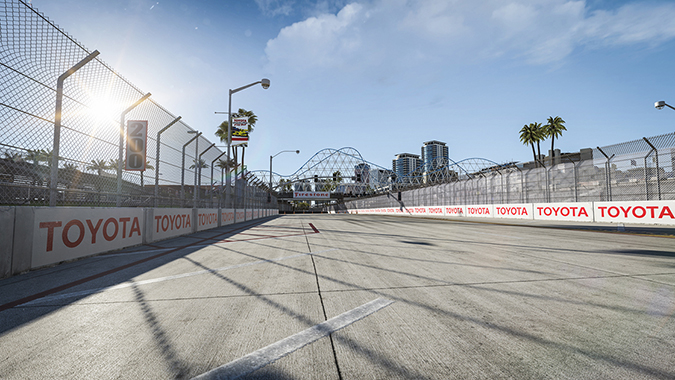 For driving sims, this DLC usually comes in the form of new cars.  For a not always nominal fee, developers offer gamers additional vehicles to customize and race.  Repeat this exchange every month for the first year of a game’s lifespan, the thinking goes, and the chance to try new cars will keep people coming back.  However, for all the hours I’ve sunk into the Forza Motorsport series, I’ve never shelled out for a single piece of paid DLC.  Despite their individual nuances, there just isn’t enough of a difference between the original selection of cars and their downloadable counterparts.  You can drive a circuit in half a dozen different vintage Mustangs, but the experience just isn’t varied enough for me to consider it a new and interesting challenge.  The recent releases of the Road America and Long Beach circuits in Forza 5 helped me understand the issue: while new cars can be appealing to collectors, it’s new tracks that increase a game’s lifespan.

Put out as free updates to the game, Road America and Long Beach have played a big role in keeping Forza 5 on my radar.  In the wake of Long Beach’s release last week, I even decided to stick around and keep playing until I finally bring my driver level up to 150 (just a few more to go as I write this).  Each of these tracks offers a new location, a new layout, and a new challenge to take on.  Unlike a new car, a new track moves players back to square one.  Rather than simply adjusting your approach to compensate for a new car’s strengths and weaknesses, track DLC throws up a fresh set of unfamiliar corners.  It’s going to take much longer to wrap my head around the turn 11 hairpin at Long Beach than it would to find my rhythm around a familiar circuit in a new car.

Of course, it helps that the tracks were free, but I would’ve happily paid for content like this.  For people like me who obsess over doing the perfect timed lap, a new track is like a new campaign in a first person shooter.  It’s hard to replicate this effect with car DLC, unless an expansion came out featuring an entirely new class of vehicles.  It’s nice to see the folks at Turn 10 taking a new approach to expanding their games after release.  Maybe they’ll bring back the Suzuka circuit next (hint, hint).