Deck-building card games are a strangely fascinating part of the tabletop world.  Where a traditional trading card deck is build before the game actually takes place, deck-building games make this process part of the competition.  It’s an unusual choice that gives players a chance to chat and joke about one another’s strategies over the course of the game.  This is plenty entertaining in classics like Dominion, but Tanto Cuore offers a unique twist on the genre.  Instead of building a kingdom or an army, players compete to employ a variety of anime housemaids.  Yes, you read that last sentence right. 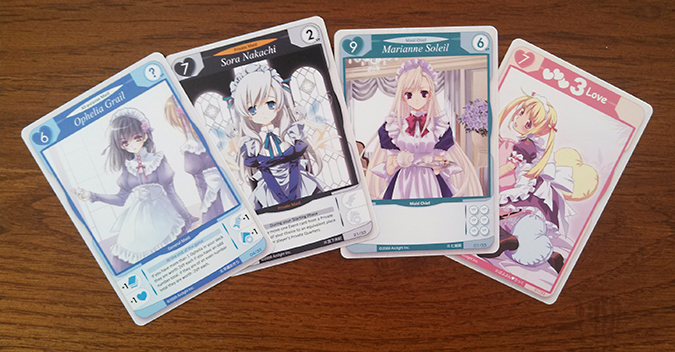 The mechanics of the game will be familiar to anyone who’s played a game in this genre before.  Between two and four players begin the game with small, identical decks, which they expand by acquiring more cards from a central pile.  Adding new cards to your deck gives you additional resources to work with, allowing you to buy more expensive and powerful cards.  Some grant special abilities, some hinder their owner’s opponents, and some contribute to a player’s final score.  The key to victory is coming up with a good strategy and acquiring cards that support that particular plan of action.

This process of using cards for resources and victory points is fairly common among deck-building games, but Tanto Cuore stands out thanks to its premise and art style.  Rather than buildings or soldiers, each card features a maid drawn by one of a variety of illustrators.  There are some prominent names from anime and manga character design featured, and the game presents a fairly wide variety of visual styles.  While the idea of competing to employ the best staff of maids may seem a bit ridiculous, that slight absurdity makes the game more fun.  Why build a barracks or hire a blacksmith when you can debate over whether to hire Viola or Ophelia? 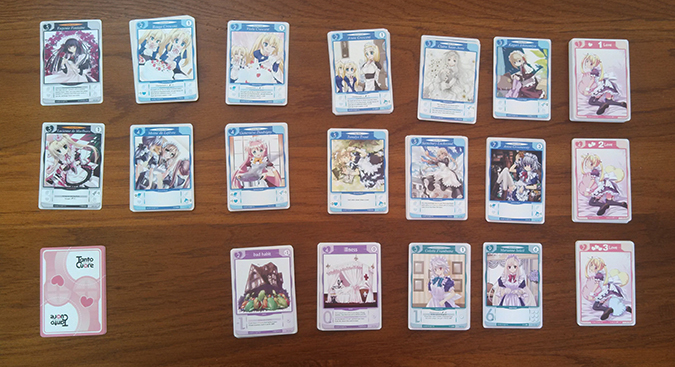 Whether by accident or design, Tanto Cuore also creates countless opportunities for players to joke among themselves as the game goes on.  Whether it’s using “Love” as a resource to pay for new employees or sending a maid to your “Private Quarters” to gain special benefits, Tanto Cuore can be an absolute riot when played with a sense of humor.  Working with named characters instead of nondescript buildings also changes the way players interact with the cards.  It’s hard not to laugh when a player curses Colette Framboise for coming up when they were hoping to draw Claire Saint-Juste.

As far as gameplay goes, Tanto Cuore is best with more than two people.  Once three or four players are in the mix, it becomes harder for one person to dominate the game.  Anyone who seems to have the upper hand quickly becomes a target for the other players, which helps keep things interesting until the end.  Replay value is high, thanks to a couple of factors.  First, a variety of potential strategies encourage players to try a new approach each time.  Second, the game provides 16 “general purpose” maids, but only 10 are used at a time.  This means that different combinations of maids can create vastly different game dynamics.  Depending on which maids are available to the players, the game may take on a more aggressive or defensive flow.

FINAL VERDICT: If you’re trying to get an anime fan hooked on tabletop gaming, Tanto Cuore might just be the ideal way to do it.  The rules are fairly simple, the game has a relaxed pace, and the whole endeavor is just silly enough that it’s hard to resist giving it a try.  Fans of Dominion or other deck-building games will likely enjoy it as a change of scenery, and several expansions are available to increase the game’s already solid replay value.  Don’t take it too seriously and you’ll have a good time.

Tanto Cuore is available on Amazon