It took me a week to finally wrap my head around Burial at Sea – Episode Two, the final batch of DLC for BioShock Infinite and the final piece of BioShock content developed by Ken Levine and his team at Irrational Games. Set up as something of a “grand finale” for Levine’s contributions to the BioShock franchise, playing this DLC you can expect to revisit many of your favorite characters in the locations from both games. 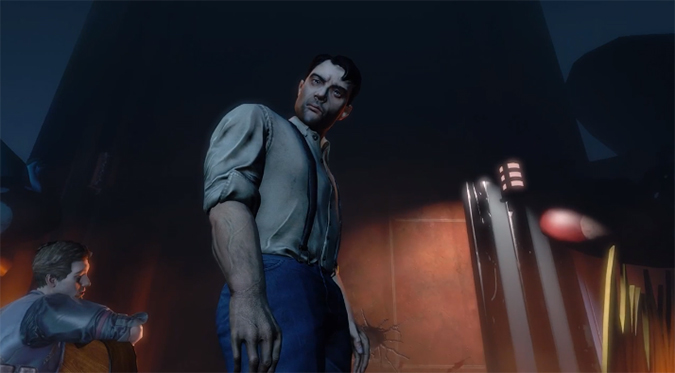 The story picks up immediately following the events of Episode One. The player, now in the role of Elizabeth, is forced to help the city of Rapture’s own revolutionary Atlas escape from Fontaine’s Department Store, which Andrew Ryan converted into a prison detached from the rest of the city. Elizabeth’s mission will have her scavenging for the materials needed to raise the building back up to the city, so Atlas and his goons can begin the civil war that occurred in Rapture immediately prior to the events of the original BioShock.

The biggest difference between Burial at Sea – Episode Two and the rest of BioShock Infinite is the gameplay. There is a heavy emphasis on stealth playing as Elizabeth, in comparison to the run-and-gun style of play as Booker DeWitt. You will find yourself crouching to avoid detection by Splicers and Big Daddies, then sneaking behind enemies to knock them out with a melee attack or knocking them out from a distance using the DLC’s new weapon, a crossbow, with three types of ammo: tranquilizers (which knock out a single enemy), gas (knock out all enemies within the gas cloud), and noisemakers (which distract enemies). Rounding out Elizabeth’s arsenal are two new Plasmids designed to aid in the stealth-based combat: “Peeping Tom,” which allows you to see enemy locations through walls, and “Ironsides,” which gives Elizabeth the power to catch fired bullets and load them into her weapons. Two Plasmids from the previous episode, “Possession” and “Old Man Winter,” also return to your loadout in Episode Two. 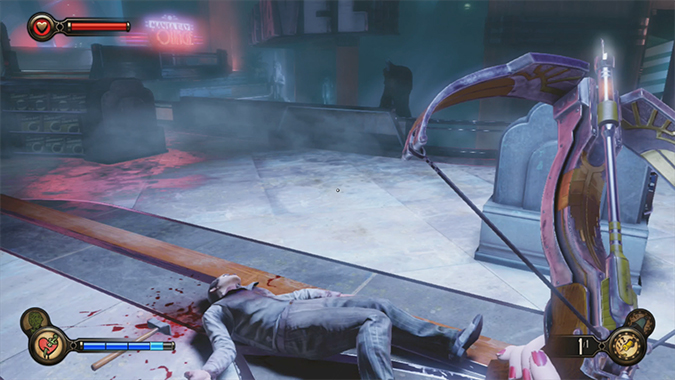 At times, the stealth-based gameplay of Burial at Sea – Episode Two feels very similar to that of the Batman: Arkham games, particularly in one section where Elizabeth can get to several high vantage points by latching onto freight hooks running along the walls and columns of a tall room. A disadvantage, however, is the player remains in first-person throughout the game. The stealth system in the Batman: Arkham franchise works much better because you control Batman in the third-person, which allows for easier detection of enemies from behind. In Burial at Sea, the player has to frequently spin around to keep tabs on every bit of their surroundings.

Burial at Sea – Episode Two’s combat system is also much more slowly paced. In addition to the sluggish movements of the stealth gameplay, strategy changes in this DLC in a way that requires more time to examine surroundings and determine the best way to progress. This especially requires careful management of your very limited supplies of ammo and EVE. Players who are more used to the fast-paced action of BioShock Infinite’s previous installments may need some time (and patience) to get used to the new stealth elements.

Die-hard BioShock fans will especially enjoy appearances by many of the major characters from both BioShock and BioShock Infinite. Characters from Infinite (besides Elizabeth) include Booker DeWitt, the Lutece twins, and Daisy Fitzroy; prominent characters from the original BioShock such as Yi Suchong and Andrew Ryan himself also play key roles in this DLC. I was honestly disappointed that Ryan did not appear in the DLC more; he communicates with Elizabeth only a couple of times through a television monitor, and you never see him face-to-face. Ryan’s appearance was more or less a cameo, but it is better than excluding Rapture’s founder from the game completely. 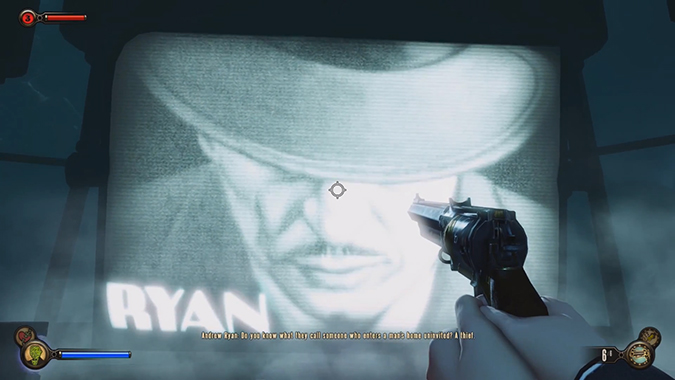 I’ve noticed on several discussion threads that there is quite a split among BioShock fans over the ending of Burial at Sea – Episode Two. I am torn as well, not so much over the DLC’s bittersweet conclusion but rather over the way in which it is tied together. Without spoiling the details, the ending of Burial at Sea attempts to connect the stories of BioShock and BioShock Infinite together – Burial at Sea ends where the story of the original BioShock begins. Long-time fans of the BioShock series may either have issue with how the ending affects the canon, or they will see it as Ken Levine cleverly connecting the cities of Rapture and Columbia through more ways than tears in the fabric of space-time. I’ve heard arguments from both sides lurking Reddit in these past few days, and no matter where you stand in this debate you can’t say that Levine didn’t foster amazing discussion among fans of the BioShock series.

FINAL VERDICT: While BioShock purists may have mixed feelings about the ending, Burial at Sea – Episode Two is overall a refreshing wrap-up of Ken Levine’s own BioShock games. As Irrational Games dissolves, its developers moving to other companies and 2K Games taking over the development of games in the BioShock franchise, this simple four-hour campaign is a testament and fitting tribute to all that Levine and his team accomplished since the original BioShock’s launch in 2007. Playing this DLC not only ties the worlds of BioShock and BioShock Infinite together, it also brings fans of Irrational’s work together for one last hurrah – somewhere beyond the sea.