Have you ever felt like “simulator” games are starting to oversaturate the PC gaming market? I started to feel that way this week. 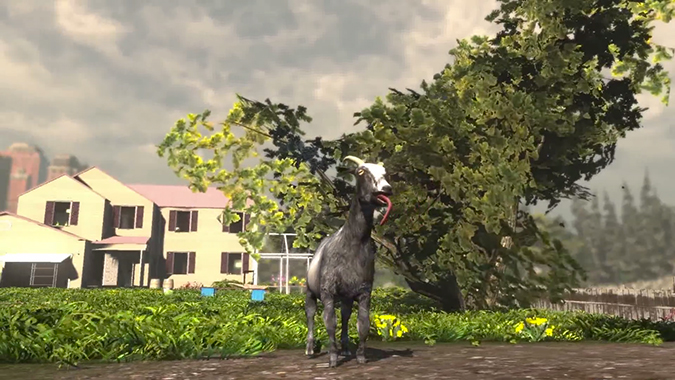 I could accept the hype behind Train Simulator, because many real train enthusiasts play such a game seriously. And I enjoy Surgeon Simulator; while it is silly with its broken physics engine and complicated controls, you’re motivated to accept the game’s challenges to finish each surgery under the ridiculous circumstances.

But now we have Goat Simulator launching on (appropriately enough) April 1st, and a fresh Kickstarter campaign for Bear Simulator has already exceeded its funding goal.

What is the appeal? Why do so many gamers pay anywhere between 10 and 25 dollars for what is essentially nothing more than a novelty game that couldn’t possibly provide more than a couple hours of silly diversion?

Let’s look specifically at Goat Simulator in an attempt to answer this. First, in its marketing developer Coffee Stain Studios proudly boasts programming bugs as a feature in the game. Any sound-minded person in game development would say that bugs in a game are bad things that seriously diminish the quality of any finished product. Yet, like the trend of celebrating the atrocious writing and acting of a “B-” list movie, gamers can get tons of entertainment from the unexpected beauty that is the glitch. In a very comedic fashion, Coffee Stain is celebrating this thrill of spontaneity with Goat Simulator’s wacky physics engine, and it’s likely a key reason why so many people are attracted to this quirky game.

There is also an experimental factor with these simulator games that likely attracts gamers to the experience too, if only for a brief time. Some recent gameplay footage of Goat Simulator recorded by IGN features a Coffee Stain developer ramming the goat into a gas station, causing the tanks to blow up as the game literally dubs you the new Michael Bay. This “what would happen if I did this” factor sparks gamers’ curiosity and creativity. Blowing up a gas station playing Goat Simulator is a very similar to your first time playing Garry’s Mod – you spend your first day blowing up hundreds of explosive barrels, then next thing you know you’re setting up ridiculously amusing scenes with the game’s physics tools. Looking at the possibilities of open-world “novelty” games like Goat and Bear Simulator is yet another reason why gamers may want to fork up a small bit of cash to play these games.

Also playing off of gamers’ curiosity, many of these simulator games have an exploration element that leaves many of us asking what more there is to find. Many have already noted a giant, red, glowing pentagram on the forest floor in Goat Simulator, and the developers are cleverly teasing that one must play the game to find out what it does. Similarly, the trailer for Bear Simulator teases monsters in dark woods, a community location called “Kickstarter Island,” and a mystery shed that can only be unlocked by Kickstarter backers. Gamers are always challenged to leave no stone unturned, and by teasing many of the stranger encounters in these simulator games the developers are getting gamers instantly invested in finding these secrets.

So, is the hype over these novelty simulator games a bunch of hype made by the developers? Yes, more or less, and the marketing driving the hype has been succeeding remarkably well. But don’t look at these game studios with an evil eye, because I see a silver lining here. All of these game studios making simulator games are much smaller, clearly up-and-coming places. Coffee Stain Studios has only been around for four years, making a few games for iOS and Steam. Bear Simulator is Farjay Studios’ very first game. Hyping up their quirky games has already lead to early success stories for these two little-known studios. Not only does it get their names on the gaming radar, but sales of Goat and Bear Simulator will surely be cash cows for Coffee Stain and Farjay, which will help fund bigger and better projects for these two newer studios in the future.

So, a gamer may be interested in in Goat or Bear Simulator for many reasons: the quirkiness, the ability to explore, or to help some up-and-coming developers get off the ground faster than a jetpack-wearing goat on a trampoline. It still boils down to any decision to check out a new game: if it piques your curiosity, if it looks like a good piece of entertainment, what have you got to lose?