While it was super-cheap on Steam the other day, I grabbed myself a copy of BioShock Infinite for my Mac. I originally played it on PlayStation 3 last year, but since I’m currently a seven-hour drive away from my PS3 I seized the opportunity to be able to play Burial at Sea: Episode 2, the game’s final batch of DLC, as soon as it’s released on March 25.

And now I find myself playing through the entire game, for a second time. 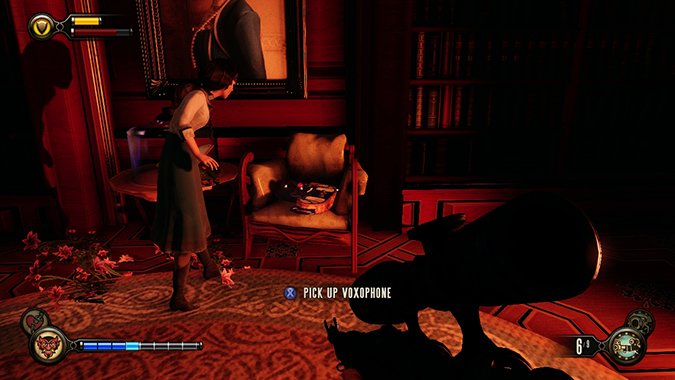 If you ask me, this is the mark of a good game, much like the mark of a good film. For movies I think are excellent, I don’t mind paying another ten or fifteen bucks to see it in the theater again. Great games work in a similar way for me, where I don’t mind killing another fifteen or twenty hours to soak in a game again, looking at its characters, its secrets, and its environments at a greater depth.

And that’s part of what makes BioShock Infinite such a great game; there are so many details that are easily missed the first time you play, searching for those extra audio diaries or picking up on verbal cues you missed the first time makes the second play-through just as rewarding, if not more so, than the first time. Drawing from a movie comparison again, BioShock Infinite is pretty much the game equivalent of Fight Club. You reach the end credits after witnessing a strange story with bizarre plot twists. Watch/play it a second time and passive phrases that seemed meaningless the first time will put a stupid grin on your face, because now everything is connected; everything makes sense.

Additionally, playing good games a second time gives you, I would argue, a more immersive experience than your first play-through. I’ll be honest, the first time I played BioShock Infinite I thought the City of Columbia was nothing more than an elaborate façade that didn’t feel like a living, breathing utopian city like Rapture in the original BioShock did. But now I find myself taking my time, pausing to listen to each character on the street and find more audio diaries. I’m listening to more dialogue that is helping to further immerse myself in this massive city in the sky. I would still say Rapture is my dystopian city of choice, but my latest play-through of BioShock Infinite is helping me to appreciate Columbia more than I did the first time.

A similar story happened when I played through Portal 2 multiple times. The game is incredibly immersive already, but Valve put so many hidden secrets in the game that are easy to miss the first time that a second play-through is incredibly worthwhile. The old Cave Johnson test chambers are now the most memorable part of the game for me, not just because of the immediate visual hints at Aperture Science’s history I saw playing through the first time, but also because of the hidden dry-dock of the Borealis research ship and the more hidden Cave Johnson dialogue I found during my second visit to the aging testing spheres.

This isn’t the first time I’ve played through a game more than once. I think back to by pre-teen years when I obsessively played through the Harry Potter and the Sorcerer’s Stone PC game countless times. I kept trying to find one missing Chocolate Frog card to 100% complete the game. I played through the game enough to be convinced that that one card does not exist. But through those replays, I didn’t just find a possible design flaw; I became more immersed in Hogwarts than I ever did reading the books. I recited the spells from the game and baffled my friends who never heard of these spells from the books alone. I hummed the game’s music more than I did the John Williams soundtrack, and saw an interpretation of Hogwarts that people who just read the books and saw the movies never had a chance to see.

So, the moral of the story: if you loved a game the first time you played it, hit the start button a second time. This day and age, designers sneak so many secrets to find that a second play-through of a game can be a dynamically different and often rewarding experience.