Reviewing a game like Samurai Gunn objectively, while at the same time trying to account for everyone’s subjective experience, is impossible. I remember my friends and I turning to each other and calling the game our “game of the year” for 2013. This may seem completely ridiculous to some. How can an 8-bit art style stack up to the visual output of new consoles, and how can a game with no story match up with the sweeping narratives of Bioshock Infinite or The Last of Us? The answer is simply that it stacks up against those games on its own terms, which is to say that it excels as a group experience. If you do not have a group of friends that you can sit down and play this game with, then there is little purpose in purchasing Samurai Gunn. However, if you do have a solid group with whom you can game, then you need to make playing Samurai Gunn a top priority. 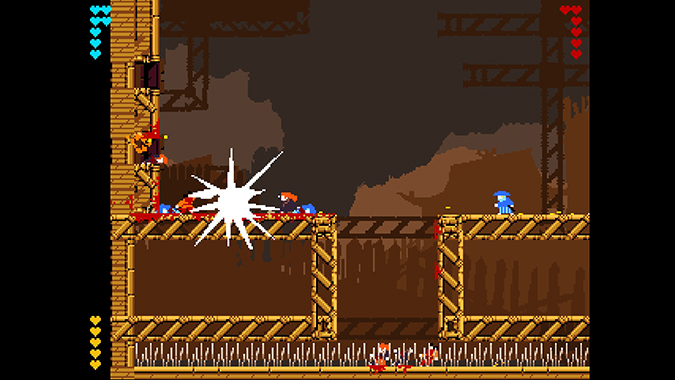 Samurai Gunn is simple. It is a competitive action game, reminiscent of Super Smash Bros. in format. You play as a Samurai with a sword and a gun, and you get three bullets per life. There are two modes, competitive and survival. Survival mode seems to be an attempt at either a single-player mode, or perhaps another competitive mode with the x-factor of computer controlled enemies thrown in, but for me it isn’t the main draw of the game. Competitive mode, fighting between two to four players, is the game’s bread and butter. The combat is usually quick, rarely lasting more than a few swipes of the sword or gunshot. You can augment your movement using sword swings, and you can block bullets with your sword, both of which add to the frantic action of the combat.

While the combat is quick, often the strategy comes from how you approach each encounter. There are four environments, each with its own unique character, and several levels within each environment type. How you interact with these environments, and the dangers they present, can mean life or death for your electronic avatar. Using falling icicles to your advantage, or avoiding spike pits and razor blades, will often decide who lives or dies. The tone this creates should be familiar to any fan of Samurai films, and may even strike a chord with the Wu-Tang Clan audience out there, though of course that comes out more in the visual and audio style of the game. 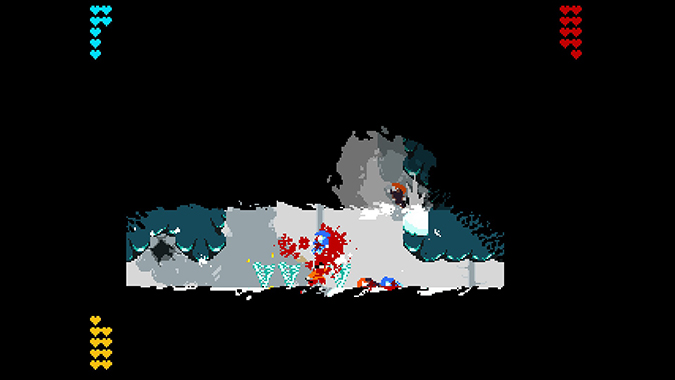 Anyone who has been paying attention may not be surprised to learn that the music is reminiscent of Wu-Tang’s “Enter the Wu-Tang (36 Chambers).” The sound design, both for music and sound effects, takes familiar Japanese tones and sound bites and makes them feel digital. The graphics equally take familiar Japanese settings and render them in 8-bit, creating a dissonant tone that works very well in conveying the intended experience. It’s a mix that matches well with the frantic, and surprisingly violent, combat. The end result is a game that, while not a graphical tour de force, creates a strikingly memorable visual style.

Despite all this, the game is still not worth playing on your own. There is no meaningful single-player experience on offer, and that can make it or break it for many gamers. On the other hand, I found its focus on local multiplayer (there is no online multiplayer) to be refreshing. Over the last generation it seemed that more and more local multiplayer was being phased out and online multiplayer was becoming the norm. Actually being able to invite people over to play video games, and not being forced to coordinate online play, is refreshing, and while Samurai Gunn may not be feature-rich it certainly delivers on the game it purports to be. This is a game with a ton of fun and a hell of a lot of style.