Not to jump to immediate conclusions, but with the release of Mario Kart 8 on the Wii U it looks as if Nintendo proved they could save the console with a single highly anticipated game. Wii U sales increased dramatically this past weekend due to the release of this next installment in gaming’s most famous kart racing series. And while it may not feel too different to veteran Mario Kart fans, Mario Kart 8 still packs enough of a punch to be this year’s first headlining game for the Wii U. 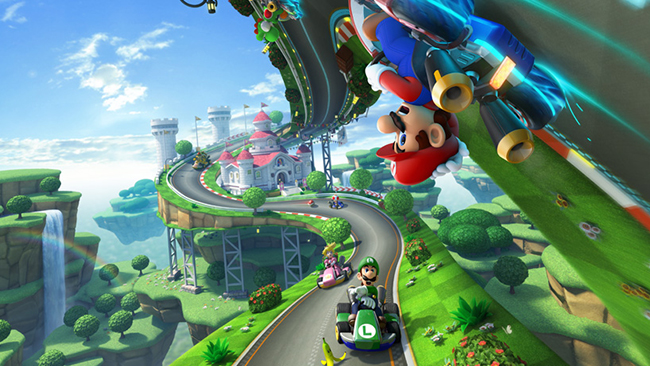 The format is still very much the same for Mario Kart 8 as it has been for previous games in the franchise: eight Grand Prix races, four tracks in each, with difficulty ranging from the slow and tame 50cc to the every-second-counts thrills of 150cc and Mirror Mode. Features from previous Mario Kart games all make a return: drifting, stunting, and the gliding mechanic, which debuted just recently in Mario Kart 7. The new mechanics in Mario Kart 8 are subtle but help to further polish up Mario Kart’s already dazzling gameplay. Three new items are incorporated in this game: the Boomerang, which gives the player three shots with a boomerang that returns to your kart after being thrown a distance; the Piranha Plant, which chomps at anything within close range of your Kart from items to other racers; and the Super Horn, a loud horn that is capable of blocking the most infamous of Mario Kart items, the Spiny Shell. All of these items are great additions to your arsenal of shells and banana peels, and really do help to add more balance to the game, whether you are in first or last place.

The biggest addition to the Mario Kart franchise in Mario Kart 8, of course, is the use of antigravity on the tracks. This changes both the gameplay and the track design for Mario Kart significantly, but surprisingly does not detract from the core aspects of the game. While in antigravity mode, bumping into other racers or glowing obstacles will bump your Kart a bit and make you spin, resulting in a slight speed boost.  This forces the player to consider two different physics setups when strategizing to outrun opponents: the traditional physics on wheels and tar, and the more “floaty” physics of antigravity mode. Transitions between the two modes on the tracks are surprisingly seamless, and there are even times when you can stunt across the dividing line to gain a speed boost, in similar style to the Transform Boosts in Sonic and All-Stars Racing Transformed. 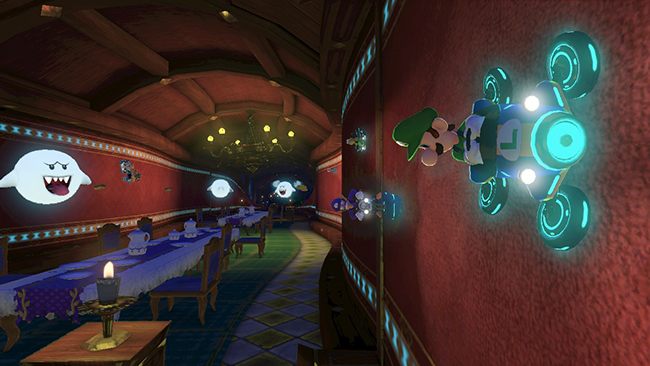 The aspect of Mario Kart 8 that antigravity affects the most, however, are the tracks themselves. Mario Kart 8’s new tracks take advantage of antigravity to make tracks that simply were not possible in previous installments. In Mario Kart 8 you climb a massive vertical waterfall, cross the steep edge of a dam, and even race on a giant Möbius strip. Some classic tracks also get the antigravity treatment, with portions of the tracks raised vertically providing a new twist to some old favorites. And seeing all of these well-designed tracks in the Wii U’s high-definition graphics makes Mario Kart 8 the most gorgeous-looking installment in the franchise yet.

While there are some impressive racetracks in the game, one thing Mario Kart 8 surprisingly lacks is Battle Mode courses. In this game, eight regular racetracks are used for Battle Mode, which may be disappointing to long-time fans of the game. Some tracks, like Yoshi Valley, fit pretty well in Battle Mode, but it’s certainly no Block Fort. It’s possible the change was made to incorporate more racers (there are now 12 racers in Battle Mode), but that also could have easily been done with some larger Battle Mode-designed stages that maintain balance in terms of level design.

Despite this hiccup, multiplayer in Mario Kart 8 is simply excellent. In particular, the game offers what is probably the best online multiplayer Nintendo has designed yet. Racing in parties of 12 online runs very smoothly, no matter what physical distance there is between players. The voting system for choosing the next track is also quite fair and works very well. There is limited chat functionality (you’re limited to a few pre-written family-friendly phrases, which is probably a good thing), but in the grand scheme of things it’s not a huge issue, because you’re online to race! 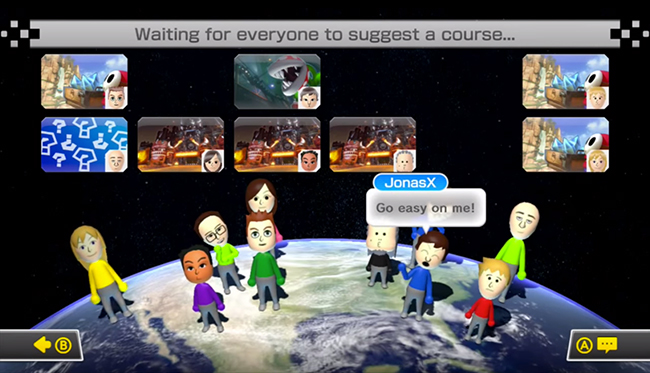 Other nice touches Nintendo put on Mario Kart 8 help to serve every kind of player: the game is easy at the 50cc level for new players, and is still challenging at 150cc for the Kart veterans. There are also tons of options for play style. You can choose to play with a Wiimote and Wii Wheel, a Wiimote and Nunchuck, or the Wii U Gamepad with or without motion steering. Whether going for accurate driving simulation or the classic controls you’re used to, Mario Kart 8 can cater to your style.

FINAL VERDICT: Mario Kart 8 may not be anything too impressive; it is simply more kart racing across the Mushroom Kingdom. But there’s nothing wrong with that. The game makes just enough changes to keep the series feeling fresh while still offering the classic gameplay and overall experience that has made Mario Kart a lasting franchise with Nintendo fans around the world. New and old fans alike will enjoy the new tracks, and the more nostalgic fans may particularly enjoy the well-selected roster of returning classic tracks. If you’re still on the fence about buying a Wii U, now may just be the time to pick one up, with this game to hold you over until the release of Super Smash Bros. later this year.