I’ll bet you’re getting pretty excited for those upcoming video game film adaptations getting hyped up in Hollywood right now. Getting to see The Last of Us and Assassin’s Creed on the silver screen probably sounds so amazing, you probably can’t wait another second to watch them!

Well, what if I told you that you can watch a The Last of Us movie online right now, and an Assassin’s Creed movie…

…And they’re not ACTUALLY Hollywood-produced masterpieces, just the cutscenes from the game all strung together in Windows Movie Maker? 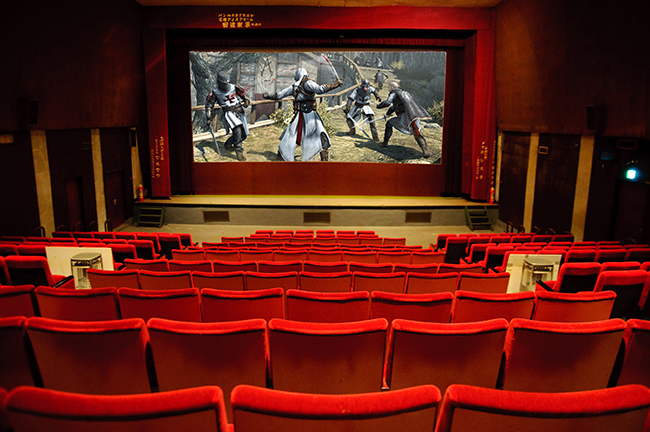 This is a trend I’ve noticed catching on in recent years, yet I haven’t seen many people discussing it critically: various YouTube users uploading video game “movies” that are often the game’s cutscenes pieced together in sequential order, sometimes with some gameplay in between. What baffles me is that these “movies,” despite not being actual films, typically rake up a million views or more. And I can’t understand why these bland cutscene “movies,” often three-to-six hours in length, get so popular.

To test the waters a little bit, I started by watching the “movie” version of one of my favorite action games, Batman: Arkham City. I figured this would be one of the better cutscene movies out there, considering Rocksteady developed a game that essentially lets you play through a Batman film. However, even with the game’s tone and excellent story, I simply cannot call this three-hour YouTube video a film. Every time a new scene begins you can see the save icon. You also quickly notice that camera work in video games can be very primitive compared to the motion picture; staring at Batman’s back for the majority of a video game makes sense when you’re actually controlling him, but seeing the Bat-Back for three hours without being in control is pretty boring. There’s also a lot of issue with pacing. The player who recorded the footage used in the Arkham City “movie,” I admit, did a good job pressing the right buttons at the right time to keep Batman’s motion fluid but even with the great care we are still stuck with watching Batman scaling a building or gliding across the map. If it were a real movie, those dull moments would have been the first things to be cut. The fight scenes the user left in were also boring; the player knew the game so well that he was able to win every battle with Batman taking minimal damage, eliminating any kind of tension or struggle that makes movie fight scenes bring you to the edge of your seat. You literally watch someone play a video game in these “movies,” and knowing that definitely impacts any entertainment factor there. 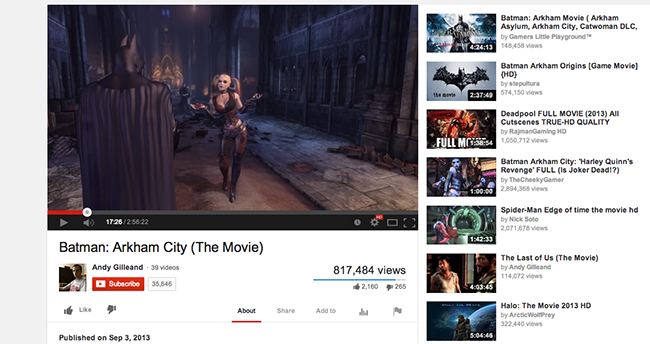 So why does this “movie” have 800,000 hits (and its predecessor, a movie by the same YouTube user made of cutscenes from Batman: Arkham Asylum, have 1.2 million)? A simple theory that is probably the best explanation is that these video game “movies” serve as a means by which gamers who can’t afford a particular game can still enjoy the game’s story. Indeed, video game storytelling has come a long way in the past decade; even though you may not be able to perfectly reproduce many of the technical aspects of filmmaking in a video game, the scripts themselves are now often on-par with the latest summer blockbuster. I’ll admit I have yet to play The Last of Us, but after watching the intro of the game through its cutscene “movie” on YouTube I now realize why the game got so much praise for its story. Watching these cutscene “movies” can give you a taste for a game you have yet to play, or they can even give you the full story if you so choose.

And it seems that is truly the intention. As a matter of fact, the user who uploaded The Last of Us – The Movie said it himself in an annotation on the video: “Remember, this is first and foremost a GAME, and should be played to be fully experienced, this is for those that don’t have a chance to do so or for those who want to re-live the story,” he said.

But perhaps these “movies” can do more than telling us the story of a particular. With major movie studios now picking up more and more video game properties for adaptations, maybe these several hours of cutscenes can inspire us. Sure, the cinematography of a game may look crude compared to actual movie cinematography. But with the story intact then our imaginations can build around it; we imagine ourselves in the director’s chair calling the shots. “What if the camera zoomed so that television monitor the Joker appears on covers the whole screen?” I thought to myself watching the Batman: Arkham City “movie.” “What if we held the shot of the timer counting down in the church’s steeple a little longer as Batman plans an escape?”

We may not get our ideas out to Sony, Fox, or Universal, but we can still dream about what would make the perfect movie based on our favorite games so great. And clearly, there are millions of other Assassin’s Creed fans doing the same thing watching those hours of cutscenes.