Welcome back to Channel Chaser! If you’ll recall a while back, a wrote an article detailing my wish list for the CW Network’s newly-founded DC comics universe, as established by the TV shows Arrow and The Flash. While not all of my hopes and dreams have been confirmed as of yet, a closer look at both of these shows, as well as their promotional materials, can give you some big hints as to what might be coming down the road.

Let’s take this promotional poster for The Flash, for example. Have a nice long look, because there’s a lot to absorb at first glance and some of it is pretty cleverly hidden. 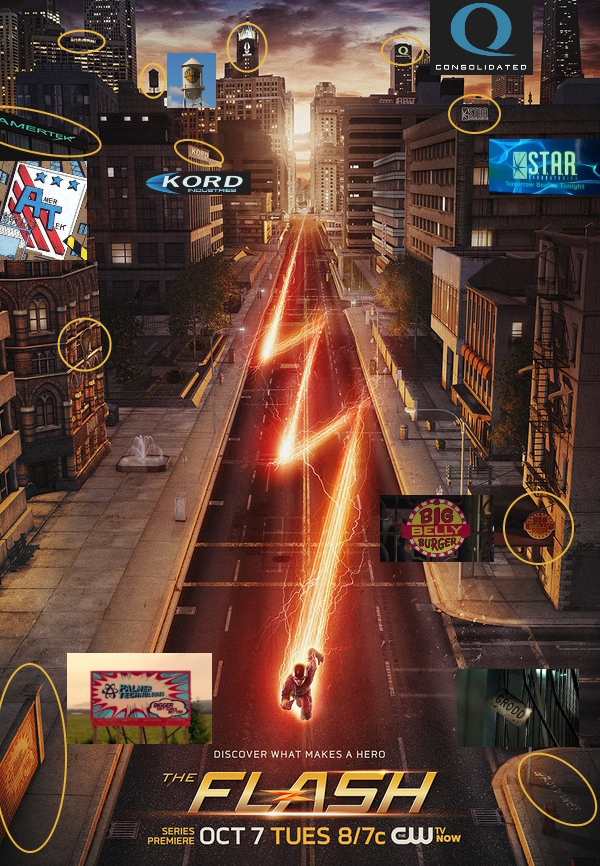 Okay, so what do we have here? Well, actually a lot. First, there are the obvious ones: the Queen Consolidated logo, which showcases the prominent ties between The Flash and Arrow. Stephen Amell’s Oliver Queen has made at least one appearance across the shows already, as has Grant Gustin’s Barry Allen, and with other characters such as Felicity Smoak visiting Central City as well, it’s pretty much guaranteed that it’s not going to end any time soon. If tentative titles are to be believed, there is also an upcoming Flash episode called “Flash vs. Arrow”, indicating that there may be a clash between the two heroes. It’ll be interesting to see how the skilled but limited Queen manages to keep pace with the speedy meta-human.

Also, S.T.A.R. Labs and Palmer Technologies logos are quite visible in the cityscape. As every fan of the show knows, S.T.A.R. Labs’ role in The Flash is already well-established, and there are possibilities that other figures associated with the company may pop up in the near future, including but not limited to Cisco Ramon and Kaitlin Snow’s transformations into the heroes Vibe and Killer Frost respectively, as well as the all-but-inevitable return of Ronny, Kaitlin’s supposedly dead fiancé, as the meta-human hero Firestorm. It’s also the home of Victor Stone, a.k.a. Cyborg, but seeing as he’s supposed to be in the upcoming Batman vs. Superman movie, I think the CW will steer clear of recasting the role.

Arrow devotees will also note the role of Ray Palmer in that series: the billionaire industrialist who eventually becomes the size-shifting superhero The Atom. Sure, it hasn’t been foreshadowed a lot yet, but…”Bigger Isn’t Always Better”? Come on. The only question is when and how the transformation will take place. It’s always seemed to me like Arrow is trying to steer clear of the whole super-powers thing, leaving that mostly for The Flash to develop, so is it possible that we’ll be seeing more of Palmer and his alter ego in Flash than in Arrow? We’ll have to wait and see on that one.

Also, between the cryptic message “Grodd Lives” scrawled on the pavement, the broken cage from The Flash’s pilot episode, and the recent reveal of Grodd himself in the episode “Plastique”, it’s only a matter of time before Gorilla Grodd shows up as a big bad guy in that show. I’ve always thought Grodd’s whole concept was kind of a goofy Planet of the Apes-type thing, but there’s no denying that he’ll make a powerful foe one he’s been properly introduced. I can only hope that The Flash brings Grodd in tastefully and with a minimum of ridiculousness.

Okay, now onto some more obscure ones. Another company that features prominently in the poster is Kord Industries, which has been hinted at throughout Arrow as well as a business and technology giant. This is of course the company owned by Ted Kord, also known as the tech-powered superhero the Blue Beetle. Fans have been begging for the Beetle to be brought in for a while now, and as one of my personal favorite superheroes, I have to agree. By introducing Kord, or perhaps his futuristic partner hero Booster Gold–hey, anything’s possible because apparently time travel is a thing in The Flash–we could get a nice counterpoint to Barry’s inexperienced and somewhat naïve do-gooder. I’m kind of sad that it seems like the Beetle we get probably won’t be Jaime Reyes, but I can understand how the whole alien storyline that DC gave his character is probably too big of a can of worms for the CW to open at the moment.

You can also see the symbol of Stagg Industries in the background, owned by DC villain Simon Stagg. Stagg is somewhat of a lower-key version of Lex Luthor, in that he’s a brilliant business tycoon who uses immoral means to get what he wants. He’s also locked in battle with the hero Metamorpho, a.k.a. adventurer Rex Mason, who Stagg once betrayed and left for dead. Unfortunately for us, Stagg already showed up in The Flash for a grand total of about ten minutes on screen in the second episode, and was killed at the end of it–a pretty lackluster showing for such a great villain. This throws a lot of doubt on an appearance by Metamorpho as well. I guess you can’t win them all.

Also, the presence of AmerTek’s logo hints at the introduction of John Henry Irons, better known as the hero Steel, and the comic book ties between Steel and Stagg make it even more likely. It seems that the CW is pulling out all the stops to fill up their universe with all the unused DC characters that they can.

And for those of you who want to get really, really subtle, there’s always Big Belly Burger. It’s no secret that this fictional fast-food chain has already showed up a lot in both Arrow and The Flash, but did you know that in the original comics, Luthor Corp owns the restaurant? Yes, the Luthor Corp: as in, Lex Luthor. Again, while it seems unlikely that Luthor will feature on the CW due to the ongoing Superman movie series, nothing is certain as of now.

Fans have also been clamoring for some Batman characters to be introduced to the shows, with non-film or Gotham choices like Barbara Gordon, a.k.a. Batgirl, and Dick Greyson’s so-far absent hero Nightwing running at the top of speculation. While this would be the biggest leap of all the spoilers I’ve gone through so far, I still don’t think it’s completely outside the realm of possibility.

Personally, I think that they should give up on DC movies and just throw all the characters into these and other new shows to build the TV universe. But that’s just my opinion. You can take it or leave it, DC. But it’s worth thinking about.