Welcome back to Channel Chaser! As I was looking back in my massive catalogue of watched TV shows for a review to do this week, I happened to notice in my daily Netflix surfing that the most recent season of the FX series It’s Always Sunny in Philadelphia has finally been uploaded. I was at first very happy, and then immediately flabbergasted about how I could have overlooked on of my very favorite shows in this column for so long. 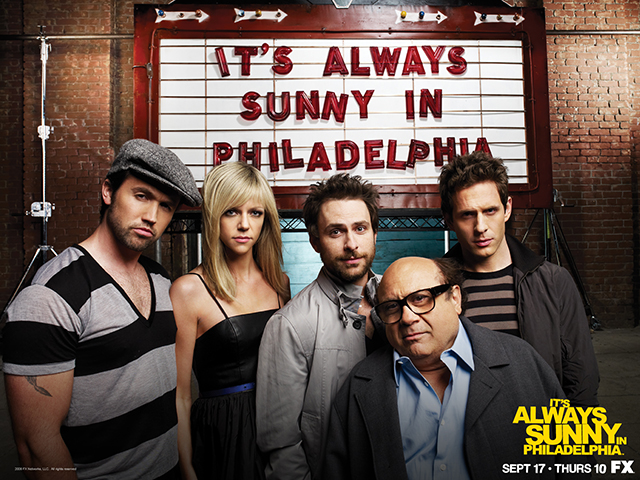 To start with, the background: It’s Always Sunny in Philadelphia–or It’s Always Sunny or just Sunny for short among diehard fans–is a sitcom-style show that follows the lives of “The Gang”, a group of five adults who run a perpetually unprofitable dive bar called Paddy’s Pub off of South Street in Philadelphia. True to the name, almost all of the episodes take place either in the pub or in different areas around the city. This may not mean much to most people, but as a longtime resident of Philly, the familiar setting really helps to ground the stories for me in very believable terms, especially when the characters reference places, events, and sports teams in the area.

I said Sunny was a sitcom, and it basically is, although perhaps “black comedy” would be a more accurate description. The show shares a lot of qualities with Seinfeld, possibly the forerunner of all modern sitcoms, in that it is essentially a “show about nothing”: that is, it’s about relatively unimportant occurrences in the humdrum, everyday lives of the characters that directly mirror things that happen to most real people every day, albeit with greatly inflated impact and consequences. Episodes frequently center on the members of The Gang discussing a controversial current topic, from guns to gay marriage to religion, and eventually getting into tremendous arguments over their vastly differing points of view.

In fact, the fan-coined descriptor “It’s like Seinfeld on crack” was eventually adopted by FX as the show’s official tagline. And for good reason: while Jerry, George, Elaine, and Kramer may have been a bit odd, self-interested, and tasteless at times, the crowd of Sunny takes these less-than-desirable qualities and ratchets them up to an eleven on the scale. The Gang consists of Dennis Reynolds, an incredibly vain and sociopathic man; his sister Dee Reynolds, who is snobby and superficial; Ronald McDonald, better known as Mac, outwardly a tough-guy “man of action” but inwardly a cringing, child-like coward; Charlie Kelly, a filthy, illiterate slob; and Frank Reynolds, father of Dennis and Dee (and possibly Charlie, too) and a scheming con-artist. I’m honestly not sure if The Gang or the Bluth family from Arrested Development should win the title for most dysfunctional cast.

As you would expect from such a motley crew, The Gang’s opinions on the various contemporary issues they are confronted with range from sadly misinformed to horrendously prejudiced. While they always claim to have a unified front, any one of them is willing at any time to stab one or more of their fellow Gang members in the back if it means they will come out on top, and they are all perfectly okay with performing degrading public acts of humiliation just to get what they want. Sunny approaches all these topics with a no-holds-barred, profanity-charged political incorrectness that makes you gasp, laugh, and cringe all at the same time. The supporting cast compliments this idea very well, with recurring characters like Carmen the transsexual, former priest-turned-homeless-drug dealer Matthew “Rickety Cricket” Mara, and the shockingly open actress Artemis DuBois.

The humor in the show is always edgy and usually very tongue-in-cheek as well, and the style of the series chips in to support this, from the incongruously cheery background music to the incredibly blunt and uncreative episode titles such as “Who Pooped the Bed?” and “Mac Bangs Dennis’s Mom”. Direct contradiction between what the characters say and what they do, and frequently even between what they say at one point in an episode and another, also supplements this feeling of confusion and dysfunction.

While Sunny does almost always focus on current affairs in its choice of topics, some of my favorite episodes are ones in which The Gang members get to show off their individual talents–or the lack thereof–in creative endeavors mostly designed to relieve their boredom when they should be working. These include two home-made sequels to the Mel Gibson Lethal Weapon franchise, featuring Mac in questionable blackface, an in-house drinking game involving public humiliation, emotional battery, and physical harm, and a staged musical titled “The Nightman Cometh,” which may or may not be based on Charlie’s repressed memories of being molested as a child. 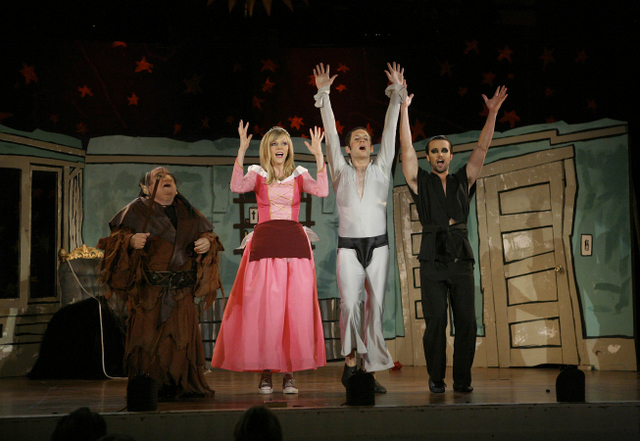 It’s also worth noting that the actors involved in the show use real life situations to parallel and further relationships in the show. For example, despite their great animosity and antagonism toward each other on-screen, Kaitlin Olson (Dee) and Rob McElhenney (Mac) are actually married. So are Charlie Day (Charlie) and Mary Elizabeth Ellis, who plays the still-unnamed Waitress. In the show, Charlie is obsessively in love with the Waitress and stalks her constantly while she insists that she has no interest in him and that she will never, ever, go out with him.

But the most intriguing and enticing thing about Sunny for me is that, in spite of all of this, at the end of the day, the characters just don’t care. Even though their plans almost always fail miserably and they admittedly can’t stand each other most of the time, there’s just something fascinating about a group of such dysfunctional people who at the end of every episode can shake it off and say, “It’s okay, screw it. Let’s just go get drunk.” In the end, The Gang always has each other, and while nobody on the outside may understand their convoluted–and probably unhealthy–relationship dynamic, it’s strangely and perversely uplifting to know that they’ll just be back at it in the next episode like nothing has happened.

While its subject matter can frequently be offensive and its humor is often rude and crude, the uncensored feel and pure anarchic energy of It’s Always Sunny in Philadelphia, combined with great character performances of its all-star cast (especially Danny DeVito–did I mention he’s in this show?) make it one you pretty much have to try at least once. Now going on ten seasons, Sunny is still going strong and shows no signs of slowing down. I know I speak for a lot of fans when I say that it will be a dark day in Philadelphia when no one gets the reference, “Hey, want to go down to Paddy’s?”