Hello everyone, and welcome to another edition of Channel Chaser! With all the buzz going around this week about trailers and reveals for the upcoming Star Wars: Episode VII, I figured today might be a good time to address one of Disney’s more current forays into the famous sci-fi franchise: the new, animated series Star Wars: Rebels. 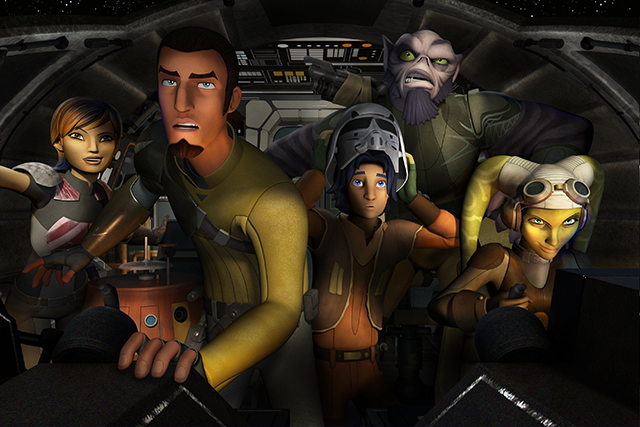 Visually very similar to the past series The Clone Wars, Rebels takes place somewhere between the prequel trilogy and the original movies, with the relatively new Galactic Empire tightening its grip on the galaxy. The story begins on the planet Lothal, an Imperial stronghold, where orphan Ezra Bridger uses his street smarts to make life a pain for the local stromtroopers and officials. Not that it’s really too hard to do–the Imperials in the show are about as bright and accurate as their live-action counterparts.

Through a series of complicated events, Ezra discovers that there are others fighting the Empire like him, albeit in bigger ways: namely, the five-member crew of a renegade starship called the Ghost. These rebels include ace pilot Hera, explosives and graffiti expert Sabine, cranky astromech droid Chopper, the Wookie-like Zeb, and former Jedi turned criminal Kanan Jarrus. Inducted into the Ghost family, Ezra explores the galaxy while battling the Empire’s tyranny wherever it presents itself, eventually discovering that he has the Force skills needed to possibly become a Jedi himself one day.

When I first heard about the series, my initial reaction was mixed. Sure, it sounded like an intriguing premise, and I do love Star Wars, but it was the Disney label that I just couldn’t get over. I mean, it’s supposed to be a kids’ show, right? How great can it be? I was not at all excited about the prospect of my treasured childhood memories being watered down for the sake of today’s P.C. programming standards.

That said, I have been known to be wrong on occasion, and I’m happy to admit that this was one of those times. The hour-long pilot movie was quite promising, if a bit kid-oriented, and the following episodes explored a few interesting ideas such as the origins of familiar Imperial tech like the TIE fighter and the Empire’s brutal, if still off-screen, methods of oppression. It wasn’t until the last few weeks that I really got pulled into the show, with installments like Ezra’s undercover infiltration of the Imperial Academy and an exciting two-parter where the rebels attempt to help an Imperial deserter escape custody. 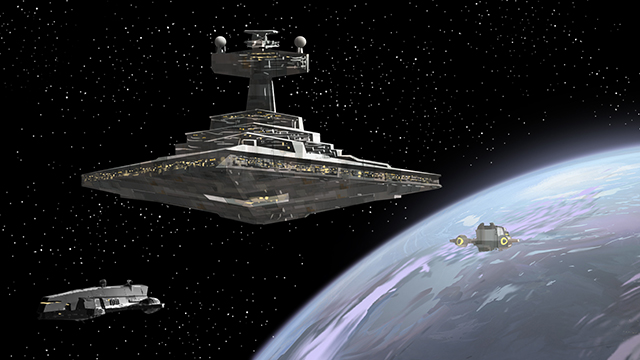 Putting the slowly improving storyline aside, I’ve also become more and more interested in the characters as well. I find Ezra and Kanan’s relationship to be the most interesting, of course, due to the whole padawan and teacher dynamic they have going on, but it surprises me how much dark subtext exists in their backgrounds for a kids’ cartoon. For Ezra, it’s the loss of his family. For Kanan, it’s the implied horrors he witnessed with the extermination of the Jedi that even now make him resistant to wielding his lightsaber in public. The Empire apparently wiped out Zeb’s whole race, too, making him the last of his kind in the galaxy.

It’s pretty heavy stuff, right? But never fear: Rebels has more family-friendly entertainment in spades, from the somewhat-flirty relationship between Ezra and Sabine to Hera’s motherly role and Ezra, Zeb, and Chopper’s constant bickering, pranks, and antagonism. I’m actually very impressed by how well Disney managed to capture the essence of Star Wars with this series, in that it’s light and fun if you don’t want to think too much about it, and really deep and meaningful if that’s more your thing.

There have also been some vague hints at the directions the show could take so far, all of which could be very cool. Ezra’s lack of control over his Force powers and his pent-up anger make him a possible candidate for going Dark Side at some point, as foreshadowed when he loses his temper and sends a massive space monster on a rampage through Imperial forces. Some familiar faces have shown up in the form of rebel droids C-3PO and R2-D2, and one wonders if more could follow in the coming episodes. And while there’s been nothing to support this so far, it’s a safe bet that the Ghost crew will come to play an important role in the rise of the Rebel Alliance, some of whose future members we have already seen.

Of course, no great series can survive without some good villains, and this is one point where Rebels has not quite delivered to my satisfaction as of yet. Instead of Darth Vader, who must be out taking care of some other really important evil business while all this stuff is going on, we get the Inquisitor, a demonic-looking alien warrior who uses the Force and looks cool doing it with an awesome double-bladed lightsaber. I’m assuming due to his title and his comments thus far that his job is to hunt down possible Jedi for the Empire, but he just doesn’t seem like that much of a threat, what with getting beaten up by the main cast all the time. He’s clearly interested in recruiting Ezra for the Empire, though, so that could be something.

There’s also Agent Kallus, the stereotypical bumbling bad guy who always lets the heroes slip through his fingers and then shakes his fist, yelling, “I’ll get you next time!” It has been hinted, however, that he was responsible for the massacre of Zeb’s people, and the two share an intense hatred, so it’s nice to at least see some kind of emotional connection between the two sides. Hopefully we’ll see more of this in the coming episodes.

So far, Star Wars: Rebels has far surpassed my admittedly low expectations and proved itself, in its finest moments, to be a truly enthralling story and a great addition to the Star Wars universe. Whether it can keep this up, however, is another story. I’ll be very interested to see how the show develops the many plot threads it has laid out. If they do it as well as they already have, we could have a new Teen Titans-level animated series on our hands. If you’re a diehard fan, you might like it. For families just looking to get into the universe, you’ll definitely like it. Do yourself a favor and check it out before it makes the jump to light-speed.