Are we really so far into December that people are starting to put together “Best of 2014” lists? As crazy as it feels, we are. We’ll have a few of those between now and January, but right now it’s time for This Week in Anime.

The anime adaptation of Kantai Collection premieres next season, and it’s one of the few cases where I genuinely have no idea what to expect. The source material here is a free-to-play online game that involves building a fleet of historical Japanese naval vessels. This is Japan we’re talking about here, so of course all the ships are personified as cute girls. You build your fleet, level up your ship girls, fight aliens, and try to avoid questioning how it all actually works.

Here’s the thing: the KanColle game only makes some modicum of sense because it doesn’t really show any of the combat. When all you see is a classic RPG-style battle interface, you don’t really have to think about how a five foot tall girl in a school uniform manages to drag an arsenal of naval weapons around without sinking. Adapt that into a visual medium like anime and suddenly you’ve got to start answering all those annoying physics and scale-related questions.

Arpeggio of Blue Steel made the ship girl concept work with AI-controlled vessels, so I assume the people working on the KanColle anime will come up with something. For the life of me, though, I can’t imagine what it’ll be. I’ll be watching in January just to see how things work out. 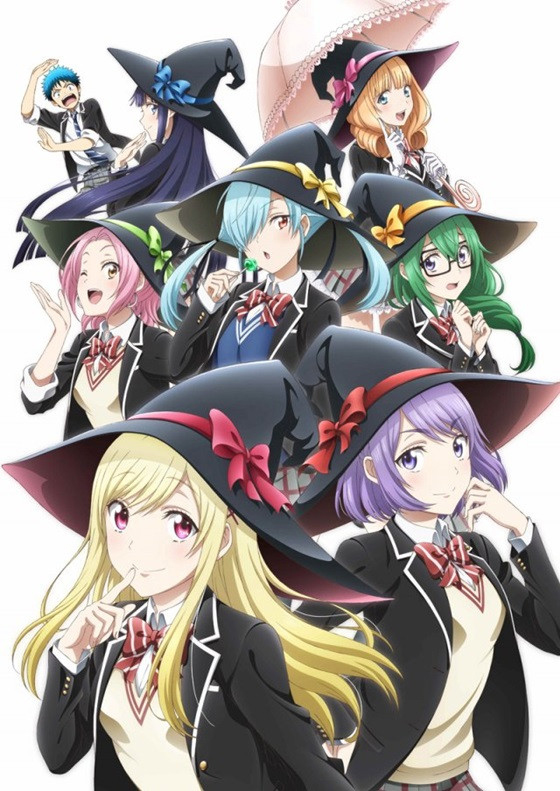 I’m cheating a bit here, as this is half spotlight and half preview. The manga version of Yamada-kun has been in print for a few years, and all 130-something chapters are available in English through Crunchyroll Manga. It’s the kind of series that feels built from the ground up to make the jump to anime, and that’s exactly what’s happening next April. Before the full adaptation comes out, a few one-shot episodes are set to ship with upcoming manga volumes in Japan.

Yamada-kun is a dumb, goofy series, but it’s smart enough to use that blockheaded nature to its advantage. The story starts off with high school punk Yamada switching bodies with straight-A student Shiraishi. It turns out that the two of them can swap back and forth by kissing, and hijinks ensue as they run into other students with crazy powers of their own. The lovably dumb Yamada is the series’ driving force, moving the plot along with his “Hulk smash” approach to problem solving.

Yamada-kun and the Seven Witches is at its best when it steps back and lets its core cast play off one another’s quirks. All of the heroes (and most of the villains) exhibit their own unique brand of stupidity, and it can be a lot of fun to watch them butt heads. In a lot of ways, this series reminds me more of an American sitcom than a shonen romantic comedy. It works equally well in small doses or as a binge read. As for this spring’s anime adaptation, it should be interesting to see how well the voice actors handle playing different characters inhabiting the same body.