This Week in Anime is back! (Pay no attention to last week. It never happened.) This week, I’ll be discussing one of the biggest elephants in the room when it comes to anime and manga. Actually, it’s probably more accurate to say that this particular elephant is on its way out of the room. I’m talking, of course, about the Naruto franchise, which is slowly coasting to a halt.

End of an Empire

Naruto was one of those rare titles that extended beyond the usual boundaries of anime and manga fandom. Ask a random stranger on the street, and he or she could probably at least tell you that it has something to do with ninjas. Even your grandparents are probably aware of its existence. Regardless of whether or not you’re a fan of the franchise, it’s a major part of the subculture we all enjoy.

Persons more qualified and knowledgeable than myself have the multi-year retrospectives covered quite well, so I’ll instead use this space to talk about Naruto as a gateway series. Its transcendent popularity means that Naruto was many fans’ first contact with the world of anime and manga. That sounds like a throwaway factoid, but it’s actually more important than it seems.

Early experiences with a medium or genre can play a big role in shaping the way in which we interact with it further down the line. They help define what kinds of shows we seek out and influence our expectations. Gundam Wing was the first anime series I watched from beginning to end, and it made me a die-hard mecha fan for years. I eventually branched out into other genres, but that giant robot background still shows in the things that make a series enjoyable for me.

To that end, Naruto has influenced the tastes of a large segment of the US fandom in the same way that other folks point to Dragon Ball, Gundam, Cowboy Bebop, or Attack on Titan as their points of origin. You can see its fingerprints on our voracious appetite for super-powered battle scenes, not to mention our willingness to sign up for long-running shows that span hundreds of episodes. New landmark titles will come and go, but fans who started with Naruto will likely continue to hold a preference for its take on the action genre. It’s not necessarily a good or bad thing, merely a point of interest in the US anime market.

With the franchise starting to wrap up, Naruto will slowly fade to the background like other A-list series before it. You can already see its influence fading as Attack on Titan, Sword Art Online, and other popular shows start to make their own marks on the medium. The fun thing now will be waiting to see what else steps up to fill Naruto’s shoes. 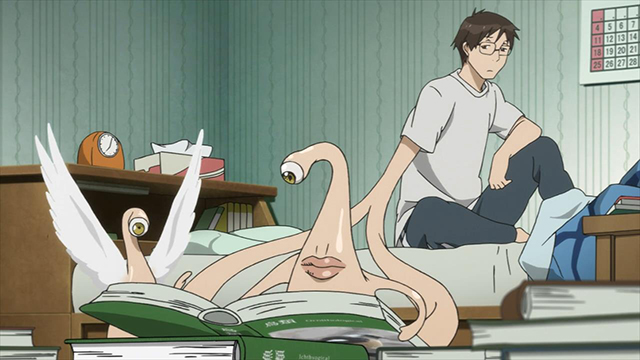 There are a lot of ways to hook someone on anime, but one method is to lean on the medium’s sheer “Holy Crap What Was That” factor. Using animated characters instead of live actors opens the door for some bizarre, violent, and downright trippy visuals without instantly breaking the budget. Epitomized by the movies and OVAs of past decades, anime at its darkest and most brutal can sometimes be anime at its most compelling. Case in point: this season’s best mix of horror and action, Parasyte: The Maxim.

Adapted from a relatively old manga series, Parasyte features a species of (what else?) parasites that take over human host bodies. They can alter their host bodies on the fly to create claws, wings, tentacles, and all sorts of horrible biological weaponry. Naturally, their driving motive is to make lunch out of normal humans. Enter an “Average Joe” main character who has his right hand taken over by one of the monsters. He manages to retain his own free will, so the two of them are forced to coexist.

Parasyte is messed up and horrifying in the best possible way. Plenty of horror series start off by knocking humanity off the top of the food chain, but few do it so insidiously. The show plays with both paranoid psychological tension and gut-wrenching violence, all while drawing the viewer in and making us question what we might do in a given situation. If you’ve got the stomach for it, it’s a great combination of emotional thrills and intellectual stimulation.

That’s all for this week. Until next time, don’t trust your right hand. It may be trying to eat your brain.