It’s still technically Monday as I write this, which means it’s about damn time for This Week in Anime. Hope you’re still awake by the time this article makes it to the website, dear reader(s). You could also just read it tomorrow, but where’s the fun in that? Let’s get to it. 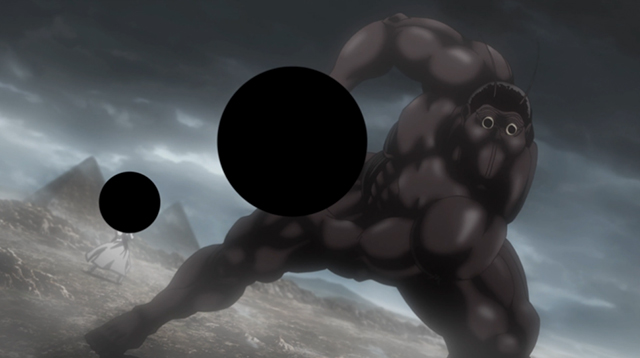 For this installment, I figured I’d talk about the Internet kerfuffle regarding the censorship in the anime adaptation of Terraformars. If you’re not familiar with the series or the debate surrounding it, here’s the short version. Terraformars is a sci-fi action series that features genetically modified super-soldiers fighting hyper-evolved cockroaches on Mars. It’s a violent and gory show by design, but you wouldn’t know it from the first few episodes.

In order to make Terraformars acceptable for broadcast, someone had to go in and cover up much of the blood and gore. In scenes where humans are messily dismembered by the space bugs, any objectionable content is obscured by black circles and rectangles. It quickly becomes obvious that Terraformars is a pretty gruesome series, because the censor blobs are everywhere. At some point, the whole thing starts to feel comical. It’s hard to resist the temptation to make a Photoshop game out of guessing what might be going on behind the big black shapes.

Herein lies the problem: all that blood and gore is kind of the point in a show like Terraformars. It’s not a clever piece of science fiction, or even a particularly good series. If you’re watching it, you’re there to see people and space bugs tear each other apart in spectacular fashion. Blocking those images doesn’t just derail the dramatic tension; it nullifies the whole point of the show. It’s like bleeping out the jokes in a comedy series. Either someone on the production staff made a terrible mistake or this is a weird attempt to boost home video sales.

While I’m not entirely sure what anyone was thinking on the Japanese side of things, some credit is due to the folks on the other side of the Pacific. US licensor Crunchyroll has been fairly quick to respond to criticism of the show’s current state. They’ve managed to talk the production companies into giving them an uncensored version of the show, which will hit the web at some point this season. Crunchyroll ran a preview of the first three episodes over the weekend, which suggests that we’ll be seeing the uncensored version sooner rather than later. The whole story is a bit vexing, but at least it’s headed for a happy ending for fans in the US. 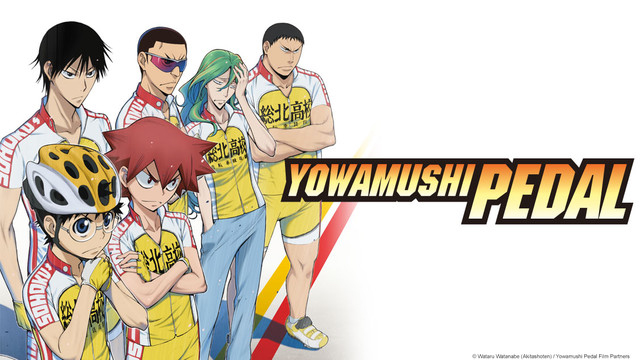 “Gosh Paul, it seems like you’re talking about a lot of sequels in the Weekly Spotlight.”

Be quiet, hypothetical voice of dissent. I don’t need to take sass from my own corny rhetorical devices. Besides, I try to give new shows five or six episodes before making a definitive judgment on the Internet.

Yowamushi Pedal is a long-running sports anime about a high school bicycle racing team. Grande Road, the new season, picks up where the first one left off. No, really, the first season just up and ended halfway through a story arc. The Inter-High race story arc continues moving forward, complete with lots of intense inner monologues.

What impresses me about Yowamushi Pedal is that it’s enjoyable for people (like me) who find real bike racing to be painfully dull. As with most endurance sports, half of the action goes on inside the athletes’ minds, so it helps a lot to be able to understand what each racer is thinking. It has some issues with pacing and believability that are common to the genre, but Yowapeda is still a lot of fun to watch. It has two core strengths that make it entertaining.

The first of these is the goofy sense of humor that shines through from time to time. When two of the main characters fight their way through a field of rivals while singing a magical girl theme song, it’s hard not to fall on the floor laughing. Yowapeda has a good sense of how far to push the limit with its characters’ special abilities, and the result is a heaping helping of cheesy fun.

Yowapeda’s other big strength is its interest in what drives a cyclist to push the limits of physical endurance. The inner monologues and flashbacks may drag on a bit, but they can also be very compelling when they’re done well. Any series that can build sympathy for its creepiest, most underhanded villain is doing something right.

Is Yowapeda the best sports series out there? No. Does it provide plenty of entertainment while I wait for a Formula One anime? Yes. Give it a watch if you’re so inclined.

That’s all for this week. I’ll be back next time to occupy your brain with another rambling block of text, so come on back.