Here in the US, we’re most familiar with manga in its standard paperback form.  For around ten dollars, we get between 150 and 200 pages of content in black and white on decent-quality paper.  Early-adopter types might also be used to digital formats, be they individual downloads or subscription-based services.  Whether in print or online, we’ve grown familiar with a low-cost, no-frills approach to manga where lots of content for as little money as possible is the goal.  In this market, premium hardcover releases might seem like something of an oddity, and yet that’s exactly what we’re starting to see from a number of publishers.

A girl, a guy, and a giant robot. Yep, you’re in the manga section.

Browse through the manga section of a bookstore and you’ll come across several hardcover manga series on offer.  There’s Mobile Suit Gundam: The Origin from Vertical, Vinland Saga from Kodansha, and A Bride’s Story and Highschool of the Dead from Yen Press.  I could go on, but we’ll stick with this group in order to do some analysis without taking all day.

Flip through any of these books and you’ll notice a number of things beyond the heavier covers.  Most of these releases are bigger than usual, in terms of both the size and number of pages.  The hardcover edition of Highschool of the Dead looks capable of crushing any of the four paperback volumes that it collects.  There’s also more “extra” content than one might expect from the average paperback; the authors’ notes in A Bride’s Story and Vinland Saga are a good example of this.  Finally, color pages make a frequent appearance, from the multiple color sections in Gundam to every single page in HOTD.  You can expect to pay extra for these releases, but that money’s going towards more than just a hefty cover. 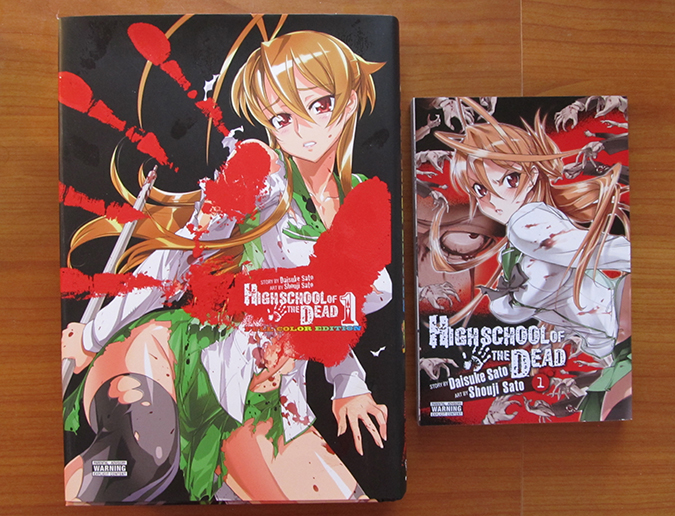 We know why this format might be appealing to buyers, but what is it about these particular titles that earned them the special edition treatment?  In many cases, it has to do with the market for the series in question.  Vinland Saga and A Bride’s Story are both extensively researched pieces of historical fiction, featuring detailed art and stories that don’t necessarily follow a typical manga plotline.  They’re probably not going to catch the interest of as many people as recent hits like Attack on Titan or Nisekoi, but they’re likely to be very popular with their niche audience.  Series like Bride and Vinland tend to play to a slightly older audience, one with a bit more money to spend than the average manga fan.  Because of this, Yen Press and Kodansha likely decided that a deluxe format would be appealing to this limited fanbase, and potentially increase each book’s profit margin without hurting sales.  A dedicated audience with money to spare is a prime market for a hardcover release, especially when the series in question is good enough to generate positive word of mouth.

On the other end of the spectrum, we have heavy hitters like Highschool of the Dead and Gundam: The Origin.  The hardcover editions of HOTD are omnibus collections of the original paperback releases, printed in color on larger pages.  In this case, Yen Press had the sales data from the paperbacks to look at when they made the decision to print a deluxe version.  This franchise hit the US at the height of the recent zombie craze, and won a sizable fanbase as a result.  Strong sales of the anime and manga probably led to the decision to make a product that would appeal to the most passionate of those fans.  I suspect a similar thought process led to Gundam receiving the hardcover treatment.  As a new take on the classic storyline, the series has a built-in audience of people who remember watching Mobile Suit Gundam way back in the day.  Where titles like Vinland Saga try to appeal to a small but enthusiastic fanbase, HOTD and Gundam try to appeal to the core of a larger audience.

The “special edition” approach is never going to work for everyone.  Plenty of manga fans simply want to read their favorite series and don’t see the need to pay extra for a more impressive product.  On the other hand, this is also a market full of collectors who enjoy the extras as much as the actual content.  Whether or not we’ll see more premium manga releases will depend on how well the current crop of titles fare.  If publishers come to see hardcovers as a safe bet, they’ll be more inclined to take that bet in the future.  If that happens, though, we might all need to invest in sturdier bookshelves.

You can find most hardcover manga discounted at RightStuf.com.