Over the Independence Day weekend, YouTube user and Source Filmmaker expert “Hypo” uploaded another of his creations from the Valve filmmaking software, a recreation of a cutscene from Sonic Adventure 2:

The top comments were all incredibly positive, ranging from “this looks better than the game” to “Sega should hire this man.”

I agree; they should. And while they’re at it, Sega should hire more talented fans that can design a Sonic game better than the actual Sonic Team can.

You see, after getting hopeful about the next installment to the Sonic franchise, Sonic Boom, I was yet again faced with crushing disappointment by the game’s newest trailer revealed at E3. The beat-‘em-up gameplay I disliked from Sonic Unleashed is making a return, there’s yet another new character being added to the Sonic universe (as if Big the Cat, Charmy Bee, Vector the Crocodile, Rouge the Bat, Chip the Annoying from Unleashed and countless others weren’t enough), and some of the worst writing I’ve seen since Sonic Heroes (is “Rings OM NOM NOM NOM” really something Sonic would say, Sega?).

But what have I been watching and enjoying a lot lately, surprisingly? Fan-made cartoons, short films, and custom levels. I’ve been listening to fan-made remixes of Sonic music, and I’ve even found a decent drawing or two of the Blue Blur. It seems like every time there is a new game around the corner, I worry the Sonic franchise will continue to face a dire future. Yet the fanbase remains strong, and continues to make Sonic fun and interesting through their passion and creativity.

Take a few of these amazing level mods for Sonic Generations, for example. Sega never released any DLC for the game, a recent surprise favorite of mine. Thus, the community took it upon themselves to mod the game, designing “Classic” and “Modern” versions of some of their levels that didn’t make the cut. There’s one for “Hang Castle” from Sonic Heroes, and even a huge mod that adds not a single new stage, but all of the best daytime levels from Sonic Unleashed. One of my favorite Sonic modders, YouTube user “Melpontro,” designed a full “Modern” version of the “Sky Troops” level from Shadow the Hedgehog:

If the level itself isn’t impressive enough, listen closely to that music. It’s a great rock remix of the original “Sky Troops” theme done by Zach Hinchy. He also composed “Classic” and “Modern” –style remixes of the themes of the other levels Melpontro plans to add to the mod. Listening to his work, it’s almost as if Jun Senoue or Cash Cash had a hand in creating those remixes.

Even the most seasoned Sonic fan knows that the fanbase is quite divided on what makes the Sonic the Hedgehog franchise great. Is Sonic all about platforming, or speed? Masses of uniquely designed new characters, or just a few classic characters with carefully developed personalities? Classic sidescrolling akin to the original games on Sega Genesis, or 3-D adventures like the Sonic Adventure games? Just look at my earlier thoughts on Sonic Boom and compare them to my thoughts on the E3 trailer written above and you can see where I stand. 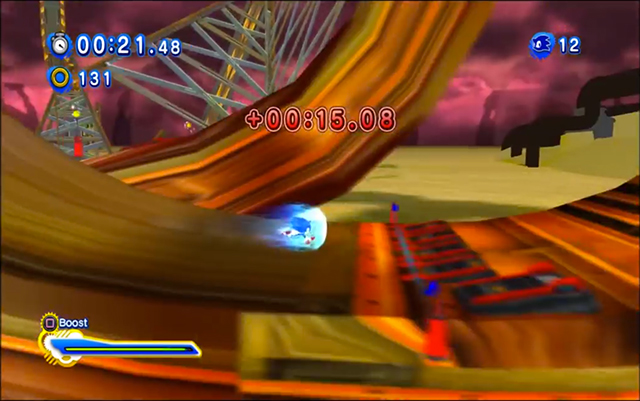 Yet in this scuffle, we forget that the Sonic fanbase is quite massive. If you like sidescrollers, there’s a fan game for that. Enjoy seeing new characters added to the Sonic universe? Check out all the fan characters on DeviantArt. There are even 3-D fan games that focus on Sonic’s speed, as well as games that emphasize platforming.

There indeed is a schism among Sonic fans. This sure is bad for Sega as they try to reboot the franchise over and over again, but it is great for us, the fans, to be able to share what we like best about Sonic through these many creative and dedicated online communities. With this in mind, I think it’s about time for the Sonic fanbase to settle our differences over what makes the best Sonic game, because we can collectively say one thing for certain:

We can make Sonic the Hedgehog look better than Sega can.