Yesterday morning sure was an interesting one for me: I walked into my local supermarket and was about to pass by the cheap-o movie rack. I never think too much of it because supermarket movie bins tend to sell the worst of the crop; while Walmart occasionally has a few hidden gems in its five-dollar movie bin, supermarkets seem to display movies likely left behind when the world’s last Blockbuster went out of business. So naturally this display was not worth my time.

That is, until I found it.

Though it was bundled with another movie I’d never heard of, I instantly recognized the details on the cover: that stylized pink-and-silver 1980’s logo, and a smiling Fred Savage wearing the Power Glove. 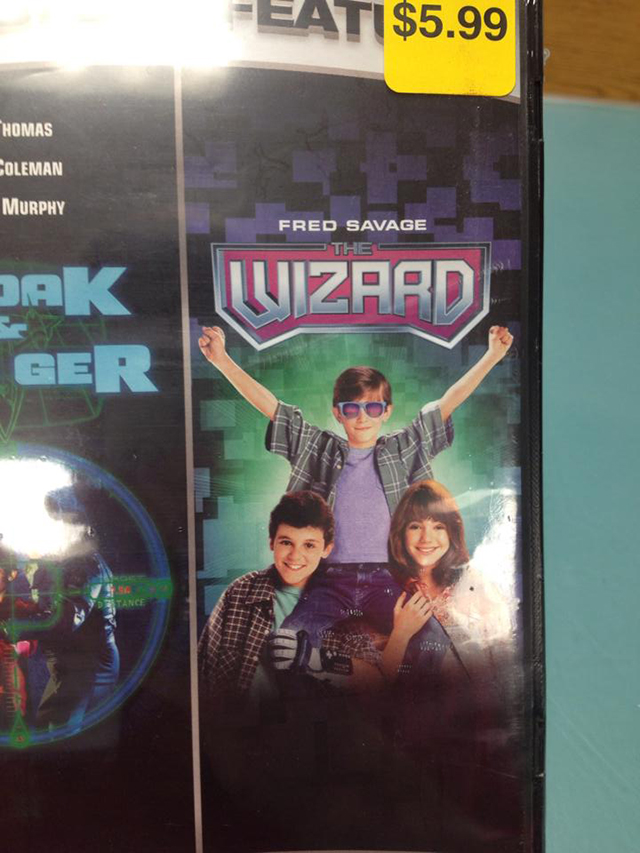 I found The Wizard. Wide-eyed and mouth gaping, I grabbed it and ran to the checkout counter. For the first time last night, I sat down and watched this 1989 cult classic video game-themed movie in its entirety.

Thanks to reading plenty of reviews and the simple fact that I am a retro gaming aficionado, I do know quite a bit about this film going into it despite the fact that I was born three years after its release. The gist: Fred Savage’s character and his mentally challenged brother run away from home, and eventually meet up with a girl who is also running away. The trio travels across the country to California, and along the way discover Savage’s little brother is an expert at video games. While avoiding some goofy cops looking for them, the three make it to California and enter the boy into a major video game championship tournament in Hollywood.

The biggest thing I know going into The Wizard is: this movie was made to sell Nintendo products. For 100 minutes of my life, I expect nothing more than a bunch of screen time for the games themselves, and of course, that infamous line: “I love the Power Glove. It’s so bad.”

But how horrendously cheesy The Wizard really is, is a mystery to me. A mystery that is about to be solved in less than two agonizing hours… 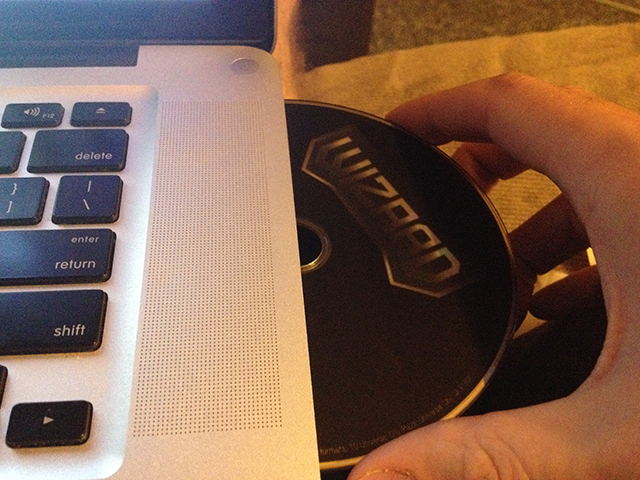 Seven and a half minutes in, and so far there is no sweet NES-era gaming. I guess we need a plot first, so we see Fred Savage get angry because his challenged brother may become institutionalized while his father attempts to eat overcooked casserole, because comedy: 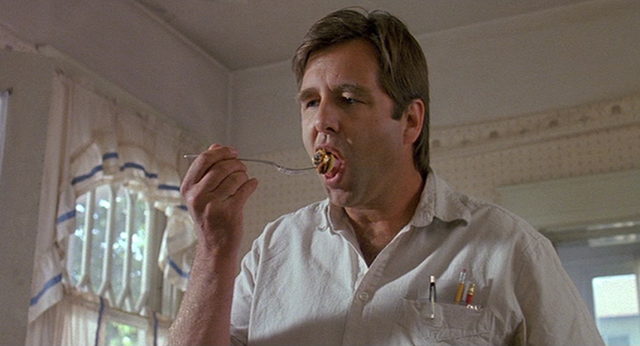 This is going to be a long movie, I can tell.

It isn’t until 15 minutes of plot development that we finally get our first glimpse of a Nintendo game, Double Dragon. And sadly, that’s all we see for a while. The first two-thirds of The Wizard focuses more on developing a terribly bland plot that is so straightforward it doesn’t need developing in the first place. Savage’s little brother Jimmy lost his twin sister in a horrific accident that left him emotionally scarred. He wants to run away to “California,” and so Big Brother Savage takes him to California. And yet, this simple story drags on for at least an hour, with the help of our comic relief, this guy: 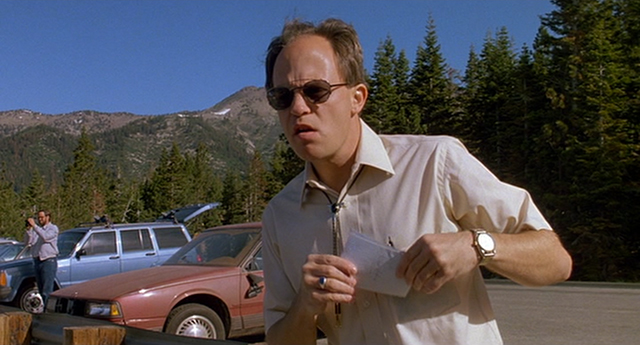 who is trying to find Jimmy and Fred Savage before Savage’s father and older brother do: 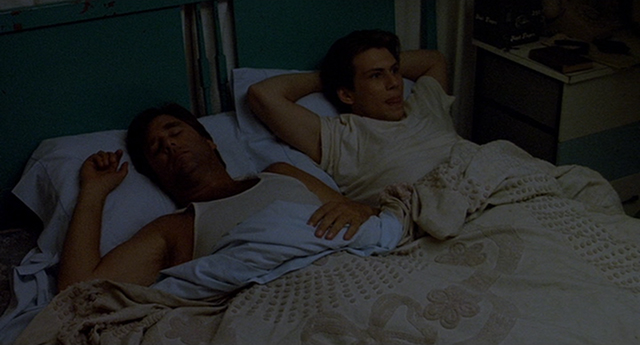 Aren’t they a lovely couple?

What is odd is how much of the comedy comes out of nowhere and often centers on video games. When that weird pervy guy and Savage’s father aren’t beating up each other’s cars, you often see Savage’s father or older brother unable to get their eyes off the television screen their Nintendo Entertainment System ™ is currently hooked up to. And this scene happens so often the joke somehow becomes even less funny than it wasn’t the first time. 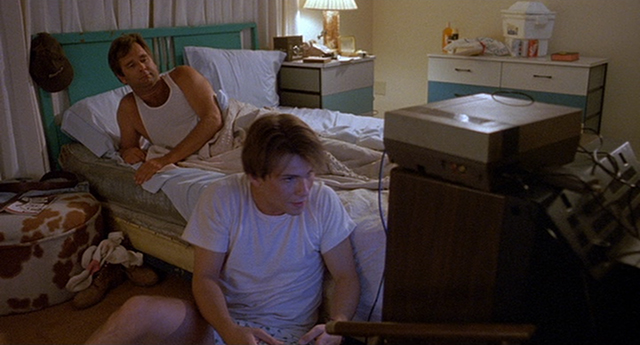 Of course, The Wizard is perhaps best known for two scenes that introduced American children in 1989 to the latest in Nintendo gadgets and hardware. The most infamous scene, of course, is when Jimmy meets his gaming rival, Lucas. Lucas shows off what was then the flashiest Nintendo peripheral, the Power Glove, uttering the phrase that instantly became the wonky motion controller’s unofficial slogan, “I love the Power Glove. It’s so bad.” 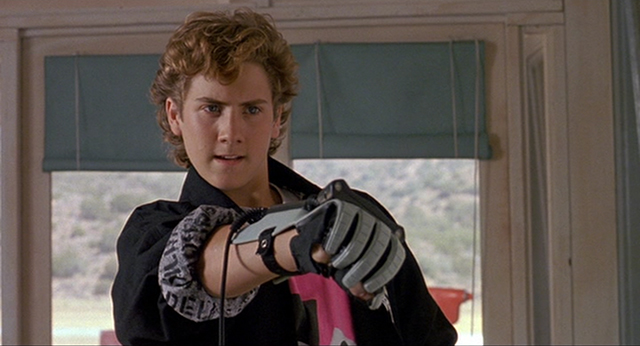 Though you have to sit through so much bland plot to get to it, the video game tournament at the film’s climax is also fun, in a cheesy 1980’s sort of way. Watching this scene, with its audience of hyper-energetic kids and the (creepy) hyper-energetic adult host on stage, you can see where television networks likely got some inspiration for the video game-related game shows that were popular at the time, like Video Power and Nick Arcade. 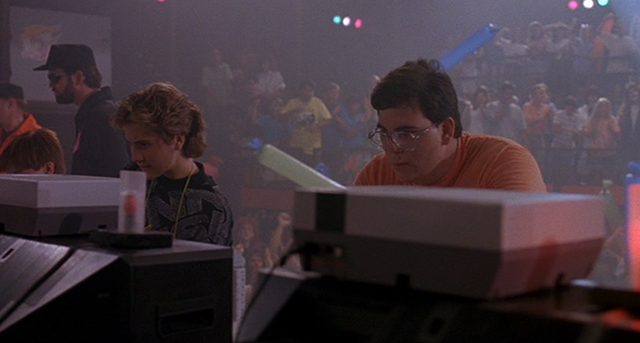 And of course, the biggest event during the tournament was the reveal of Super Mario Bros. 3 to American audiences. In 1989 the announcement of a new Mario game in this movie must have been a huge deal. To me, however, I just see the flaws in the scene. There was no way Jimmy could have known how to find the Warp Whistle if it was his first time playing; it was obvious that the action in the movie was meant to show kids an example of some of the secrets to be found in the game. It was still a fun scene nonetheless, and it too will be remembered for its corny but cool lines (“Ladies, gentlemen, children, siblings, animals…”).

But a few smiles here and there near the end of The Wizard were simply not enough for me to enjoy it. At the time of its release, the movie was criticized for its blatant product placement. As a now 25-year-old family film, those obvious Nintendo commercials feel more like a nostalgic trip into the world of classic Nintendo today than a sales pitch. Besides, those quick glimpses of Ninja Gaiden, Mega Man II and Teenage Mutant Ninja Turtles are far more interesting than the dull jokes and boring plot. That’s right, watching other people playing video games is more entertaining than the movie itself.

Though it is a neat little piece of Nintendo history, I can’t say I love The Wizard. It is so bad.