More than 1.2 million views now grace the video that intrigued the video game community this past weekend, a new attempt at a world record speed run of the original Super Mario Bros.

Whether or not you can consider this attempt by YouTube user “Lord Saradoc” as an officially recognized world record attempt, however, is up for debate. Many wisdom-filled commenters pointed out, and Saradoc himself admitted, that many glitches in the game were exploited to achieve his record completion time of 4:57.69. Some video game record keeping organizations, such as Twin Galaxies, explicitly state that many of the techniques Saradoc used (such as “using the pipe before the [lava] pit” in World 8-4 and “jumping against a wall or pipe”) result in immediate disqualification from their record books.

Perhaps I’m being a bit too technical analyzing the run and whether or not it can be declared an official world record. Regardless, that run is so fun to watch. Exploits or no, I know I will never have the skills to complete Super Mario Bros. in less than five minutes.

The bottom line here: video game world records are coming back with a vengeance, and are more entertaining to watch than ever before.

We are in a different era of gaming records, however. We can still find out who has the world record high score in Pac-Man (Six people achieved a perfect score of 333,333,360 since 1999), but largely due to online conveniences like Twitch and YouTube, world record speed runs are becoming increasingly popular. Whether we can call some of these exploit-riddled runs “official” world records or not, it takes a player who knows a game inside and out to be able to make mind-blowing record times. Speed running has reached a point where it can practically be considered a sport.

I first noticed this with the rise of “Games Done Quick,” a bi-annual event where speed run record holders participate in a weeklong marathon of games, during which money is raised for various charities. Broadcast live on Twitch, many speed runs are viewed by a modestly sized live audience, who breathlessly pay attention to the players’ craft. If the speed runner successfully executes a difficult exploit, the crowd often gives some quick applause before the action picks back up again. The polite clapping then ceases so as not to break the player’s concentration. There is so much respect from the audience for each speed runner. Their mannerisms are akin to watching pro golfers tee off at a major tournament. 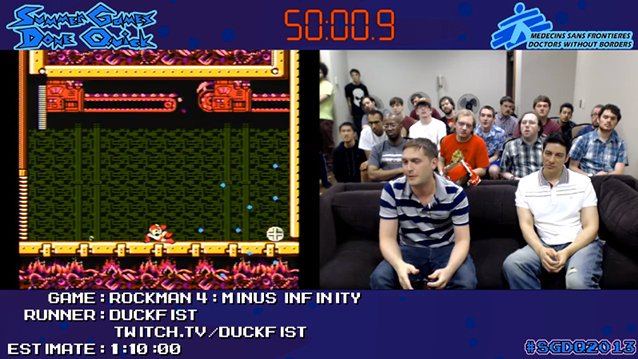 I remember the first speed run I watched in full. It was at some point during high school I stumbled across a record completion of Super Mario 64. I was at first irked by the player’s use of exploits – clipping through Star Doors, ground-pounding on the endless staircase to jettison up it and reach the top – but after seeing him deliver his last blow to Bowser, I sat there as the credits started to roll thinking, “Damn, that was cool.”

The debate will continue for decades, for sure. Some argue if a glitch is in the game, speed runners should exploit it for faster times. Others say glitches should not be used in record attempts, as the speed runner is not playing the game as it was originally intended to be. Regardless of whether or not we can accept these speed runs as world records, there clearly is a newfound respect for those players who found the strangest and most hidden glitches to take advantage of in speed runs. And even if someone gets a record time on Super Mario Bros. “by the book,” that too takes skill, pushing the right buttons at just the right time to pull of the perfect jump and shave off a few seconds of play time.

So keep an eye on the speed running community. It’s rapidly growing, and can give you some of the best entertainment gaming can offer.

Or they’ll make you jealous knowing you’ll never get past those stupid Hammer Bros. on World 8-3 of Super Mario Bros., let alone complete the game in record time. It can go either way.