It’s easy to like Black Lagoon for its constant barrage of gunfights, car chases, and witty one-liners, but one of its less explosive strengths comes in the relationship between the main characters.  There’s a fascinating dynamic between Rock and Revy that develops over the course of the series, producing deadly tension and wonderfully understated friendship in equal measure.  In order to understand what makes this quasi-romantic “couple” so compelling, we need to look at these characters as individuals before analyzing how the series throws them together. 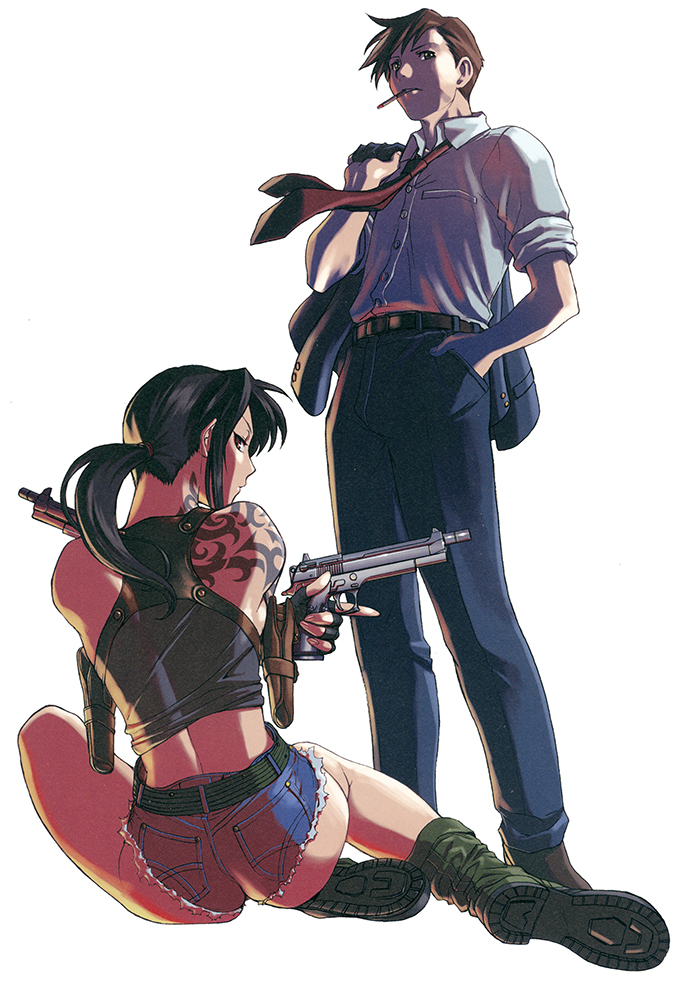 Rock may be the easiest character to cosplay in the history of anime.

Rokuro “Rock” Okajima could have very easily been an extraordinarily dull or irritating hero.  As a white-collar Japanese businessman dragged into a world of organized crime and piracy, Rock initially serves as the audience’s window into the fictional city of Roanapur.  He asks all the stupid questions necessary to fill in the story’s setting, and we learn the rules of the criminal underworld along with him.  What sets Rock apart from countless other “fish out of water” characters is how he changes as a result of his experiences.

Rock’s business experience makes him an ideal negotiator for the crew of the Black Lagoon, earning him a place on the crew of the titular torpedo boat.  This position puts him in close contact with the heavy hitters of the criminal underworld, like Balalaika and Mr. Chang.  Between these strong influences and the constant “might makes right” resolutions to the series’ plotlines, Rock slowly learns that the only way to get what he wants out of Roanapur is to become one of the people pulling the strings.  This ambition is fully realized in the most recent story arc involving the Lovelace family, which shows Rock playing organized criminals, special forces troops, and a very unstable assassin against one another to achieve his goals.  Over the space of nine volumes of manga (or two seasons and an OVA if you prefer the anime timeline), our mild-mannered viewer stand-in becomes an underworld mastermind who wouldn’t be out of place in a series like Homeland.

On the other hand, we have Revy, the heavily armed combat specialist of the Black Lagoon crew.  Like Rock, Revy begins the series as a relatively archetypal figure: the partially unhinged gunslinger with a habit of letting her handguns do the talking.  As we learn more about Revy, she becomes far more intriguing.  Leading a life of crime since childhood has given Revy plenty of street smarts, but has also left her extremely damaged from an emotional standpoint.  She’s not the type to be fooled by anyone, but that goes hand in hand with an inability to open up to other people.  For all her violent bravado, Revy harbors a great deal of doubt over her worth as a person. 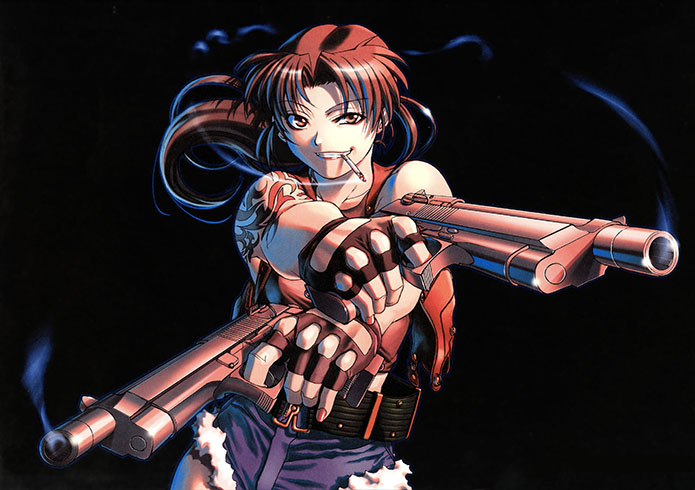 Where does the cigarette smoke end and the gun smoke begin? Well played, dear illustrator.

Of course, that self-doubt certainly doesn’t stop Revy from pursuing her own priorities.  Even if she’s unhappy about the person she’s become, she’s determined to make the most of her situation, even if that means hurting others (or putting a bullet in the head of anyone who gets in her way).  Revy’s worldview has a kind of Darwinian quality to it, although she’d probably amend “survival of the fittest” to “survival of the best-armed.”  She doesn’t see herself as being above the occasional bit of grave robbery or human trafficking if it means getting a leg up on the competition.

Putting these two broken yet resourceful characters together is an obvious recipe for fireworks.  Revy takes violent exception to Rock’s idealism early in the series, while Rock is constantly infuriated by Revy’s willingness to resort to despicable acts of crime whenever she feels it’s necessary.  Eventually, this tension morphs into a tentative understanding, and they begin to rely on one another.  Revy uses Rock as a way of steadying her moral compass, and Rock comes to depend on Revy to bail him out when his desire to do good lands him in trouble.  They effectively become one another’s best way of staying sane in a crazy world.

Just as fascinating as this shift from opposition to alliance is the reversal of roles that Black Lagoon offers us in this relationship.  The action genre is filled to bursting with veteran soldiers and hitmen who rediscover their sense of right and wrong in the fight to save a damsel in distress.  In Black Lagoon, the genders of the main characters are swapped.  To borrow fairy tale imagery, the princess is the one slaying the dragon to protect the knight.  Of course, in this case, the magic sword is a pair of customized handguns and the dragon is an endless supply of bad guys with assault rifles.  Revy and Rock remind me a bit of the equally understated relationship between Ripley and Hicks in the classic science fiction film Aliens.

Perhaps my favorite thing about the “romance” between Rock and Revy is that it’s never actually treated like a romance.  There’s no sweeping confession of feelings, no kiss in the rain, and no happily ever after.  In fact, you could make a strong argument that Rock and Revy don’t have romantic feelings for one another at all.  The series is deliberately ambiguous about its heroes, leaving the audience to wonder if there’s something going on between the two of them when the camera isn’t rolling.  It’s a classy, subtle choice in a series full of gun-toting maids, arms-dealing nuns, and torpedo boats.

You can buy the manga and anime versions of Black Lagoon from Amazon.com here