With the first season coming out on DVD this month and a fancy Blu-ray box on the horizon, Love, Chunibyo and Other Delusions has wandered in and out of my mind a few times recently. I was in the middle of describing Dekomori’s endlessly amusing “Mjolnir Hammer” attack to a friend when something odd occurred to me: anime is bursting at the seams with references to Norse mythology. If a character in a fantasy series has a big hammer, there’s a 50-50 chance it’s called Mjolnir. The term “Valkyrie” gets thrown around constantly in sci-fi and mecha shows. Numerous characters from Ah! My Goddess take their names from Norse mythology. Heck, there’s even a series called Ragnarok. This all begs the question: what is it about the old Viking faith that anime and manga writers find so fascinating? 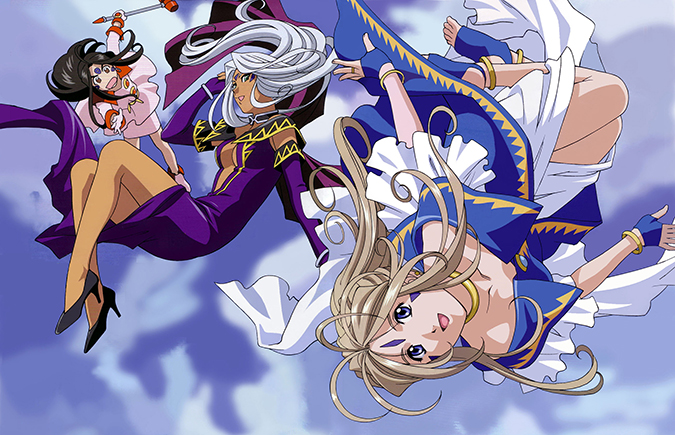 I’d make a “Flight of the Valkyries” joke here, but Belldandy and company are actually based on supernatural creatures called Norns.

The short answer is that Norse mythology is full of the kinds of conflicts that make for epic, action-packed storytelling. You’ve got gods taking on all kinds of powerful monsters. You’ve got a warrior’s heaven where you drink and fight all day, every day. You’ve got an inevitable apocalypse drawing ever closer. You’ve got iconic, archetypal characters with compelling flaws. Just throw in some giant robots and make everyone a teenager and you’ve got yourself a giant robot series.

Adopting folklore from a foreign culture also saves the trouble of having to come up with names for characters, places, and objects. Belldandy and her sisters in Ah! My Goddess are named for a trio of mythical characters who determine the fates of humans and look after a holy tree called Yggdrasil. By some incredible coincidence, the manga and anime characters maintain a computer system called Yggdrasil, which controls reality. It’s almost as if Kosuke Fujishima thought, “Hey, this is a neat concept that’s already full of mythical-sounding names. I should totally use it for my manga series!” As far as I know, he has yet to be sued for copyright infringement by a time-traveling Viking, so it looks like the idea worked out. (The case would be dismissed anyway; ancient mythology is in the public domain.)

Of course, Norse mythology isn’t the only ancient tradition that sees its ideas and characters borrowed on a regular basis. Church-sanctioned vampire/demon hunters are a staple of supernatural anime, and portions of Arthurian lore get ripped off all the time. So why all the cultural exchange? It’s the same reason many Wild West movies borrow the plots of samurai films: people are often fascinated by foreign cultures and eager to adapt new ideas into their own fiction. If that weren’t the case, I wouldn’t be writing this column about Japanese animation in the first place.