You’ve found the perfect introductory anime series or movie and talked your friend into watching it. Only one step remains: making a one-time experience into a regular hobby. This is the part over which you’ll have the least control, since most of it comes down to what happens in your friend’s mind. However, there are a few simple steps that you can take to help the world of anime put its best foot forward.

As anyone who’s ever pitched a creative project or business plan will tell you, presentation matters. When it comes to anime, this means finding the highest quality, most reliable media setup that you can. To show off the sights and sounds of your chosen title, a decent television and set of speakers are preferable over a computer. Streaming video has a habit of failing at the worst possible time, so go for download-to-own content or physical media whenever possible. I once spent five minutes staring at a progress bar halfway through the final episode of Madoka Magica; don’t let such a fate befall your friend’s first taste of anime. 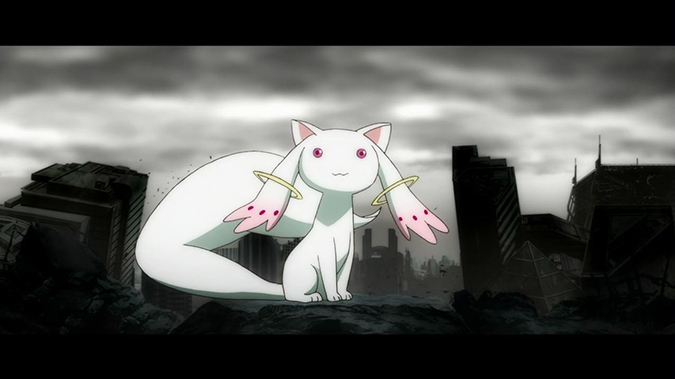 I wish I’d just bought the freakin’ Blu-ray. AM I A MAGICAL GIRL NOW!?

Good technology is a big part of the viewing experience, but you have a role to play as well. Even the most accessible anime can occasionally require a bit of explanation, and it’s your job to be your friend’s tour guide. Watch the show you’ve chosen ahead of time and try to spot any scenes that might not make sense to an inexperienced viewer. This little bit of preparation will help you give clear, concise answers when needed. Be as helpful as you can, but remember not to get so carried away that you end up talking over half the show.

It’s also important to remember that not everyone approaches the viewing experience in the same way. Some people like to talk about a show as they’re watching it, while others prefer to treat the living room like a movie theater and keep quiet. It’s best to let folks experience anime in their own way, even if it’s not your preferred atmosphere. You’ve probably watched TV with your friend before, so you should have a good idea of their ideal viewing environment. Letting the other person set the level of conversation will help keep the focus on the anime.

Once the final credits roll, it’s time to read the room. Is your friend bursting at the seams to talk about That Awesome Scene Where That Character Did That Cool Thing? Good! Dive right into the geek-outs and exaggerated re-enactments. Did something remind them of another movie that they’ve seen? Let the comparisons begin. As you chat, you’ll get an idea of how much your friend enjoyed the experience. Figure out what parts of the show stood out, and use that knowledge as you move on to the final step: the follow-up recommendation.

Channel the spirits of Amazon and Netflix, because it’s time to point out that people who liked one thing also liked another thing. Maybe it’s another movie from the same director. Maybe it’s the next episode in the series you just watched. Maybe it’s a different work with a similar main character. Whatever it is that your friend enjoyed most, be ready to supply more of it. Set up another viewing, or lend out some discs. Hopefully, this first experience has sparked your friend’s interest in anime. Now all that remains is to feed the flame. Before you know it, the student will become the master.

You can read Part 2 here.