Welcome back to Channel Chaser! It seems like it’s all the rage these days to get your favorite TV shows from the Internet rather than having to go through all the effort of sitting down in front of the old tube at the same time every week; maybe it’s just the fact that mobile devices are huge now, or that we live in a more on-the-go world now…I’m sure you’ve heard it all before.

Anyway, one of the ways that online content providers such as Hulu and Netflix are trying to capitalize on these trends in viewing is to skip the traditional middleman of content providers and go right at their viewers with original programming. Personally, I’m not a huge fan of this idea right now, mostly because I haven’t seen that many Hulu or Netflix-exclusive shows that have thrilled me yet. It also doesn’t help that since the shows are online only, there’s not the same sense of predictability, structure, and urgency that usually makes me want to catch a show every week. Bottom line is, webisodes just aren’t doing it for me right now.

My personal quibbles about mediums aside, though, I do think this would be a good time to bring up one of what I think is the more promising online-only shows out there; Hulu’s wild Western spoof series Quick Draw. 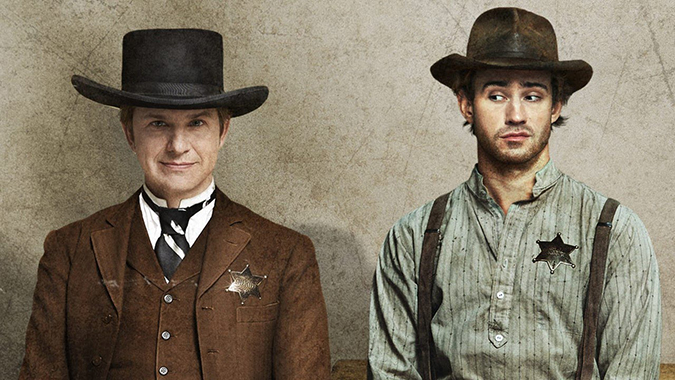 In order for me to get interested in an online show, there usually has to be something fundamentally different about the series that sets it apart from anything else I’ve watched; some characteristic that just wouldn’t fly on regular television. Quick Draw has this in spades; the biggest reason being that it is a half-hour, improv-only comedy. What that means is that basically outside of a rough premise for each episode, nothing shown on the screen is scripted; the humor is captured pretty much as it happened in a one-and-done shot routine.

Usually I find improvised comedy to be a bit inconsistent for my taste, but serious kudos to the creators and actors of Quick Draw for coming up, more or less on the spot, with one of the more inventive and humorous plotlines I’ve seen in a sitcom. The show follows John Henry Hoyle, a Harvard graduate who becomes the new sheriff of the one-horse, rough and tumble frontier town of Great Bend, Kansas.

Beginning in the first episode, it is made clear that Hoyle, portrayed by sometime comedic actor John Lehr, is unusually well educated for his time, in relatively modern fields such as criminal psychology, ballistics, and forensics. This causes the less sophisticated, small town folks he deals with on a regular basis no end of irritation, as in spite of being a crack shot with a relatively sharp mind, Hoyle is tactless, insensitive and blunt. He is also a miserable hand-to-hand fighter and hates physical conflict in a direct reversal of most Western lawman stereotypes, much to the disgust of his dull townie deputy Eli and Honey, the voluptuous owner of Great Bend’s saloon and whorehouse.

Through Hoyle and his modern sensibilities, the show also takes repeated shots at the basic assumptions that most old-school Westerns rely on. In contrast to his less educated associates, he puts no stock in superstitions and has no qualms about getting his hands dirty in investigations, from handling severed body parts to sampling the stomach contents of murder victims. He also feels it his duty to impart his supposed wisdom to everyone around him and constantly runs his mouth off; for example, telling a horrified Vernon Shank, the local undertaker, that nobody wants to befriend him because he is “creepy,” and admitting that he “failed jumper negotiation class” only after the town drunk takes a dive from the saloon’s roof.

As is the case with many improvised comedies, the humor in Quick Draw can sometimes be spotty. One of the cardinal rules of improv is to never directly contradict or deny something another actor says; Lehr and the other cast members mostly avoid this, but on occasion some scenes do devolve into a circuitous, back and forth argument that more carefully scripted sitcoms can avoid. The awkwardness and raunchy nature of much of the humor can also be off-putting at times, including Hoyle’s incredibly blunt statements on his own sexual relationships. It’s funny the first few times, but eventually enough is enough.

Improv-style shows also suffer from a lack of real narrative direction, which I think is critical for a television show; but Quick Draw does feature some recurring elements, and eventually over its eight episodes gains the rudiments of a storyline. This primarily focuses on the tale of Hoyle’s dead wife, who may have been a famous outlaw, as well as the man that killed her: Cole Younger, a vicious and ruthless masked desperado that is Hoyle’s most frequent nemesis, both legally and romantically.

Honestly, if this was a scripted sitcom rather than improvised, I would probably give it much higher marks; the premise of Quick Draw is hilarious, and it would probably stay more consistently funny besides. As it is, the dialogue bickering can become a bit tedious to listen to, but overall the show manages to stay pretty consistently funny. If you’re interested in getting a few good laughs for a minimal time commitment, I’d say check it out. Plus, Hulu renewed Quick Draw for a second season later this year: so I for one will be watching to see if this show’s plot becomes more defined and the humor more on target.