Welcome back to another edition of Channel Chaser! This week I’m eager to discuss with you what has been on my mind–and I’m sure many other people’s minds–since Sunday; the season four premiere of HBO’s Game of Thrones. 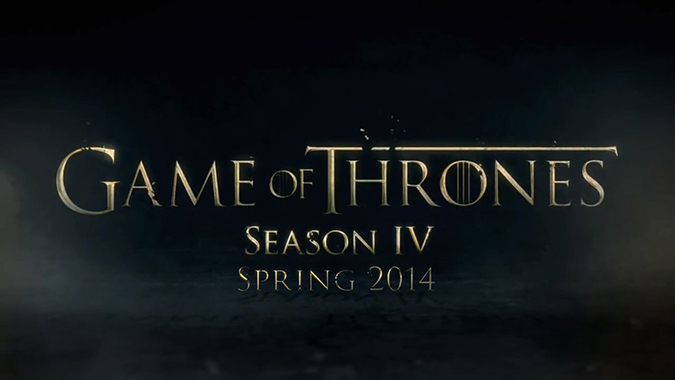 Before I go any further, if you have not yet watched the episode, I would ask that you turn back now to avoid being spoiled. Living with a bunch of people who take Game of Thrones very, very seriously, I know just how upset that can make people. Also, for those out there who may not watch Game of Thrones regularly, trying to explain the show’s back-story up to this point would take about five of these columns; sorry about that. I can only urge you to start from the beginning and catch up with this wonderful television series as soon as possible.

Are you still with me? Good. Moving on…

In their review of the episode, IGN gave the season four opening an 8.5 out of 10, and I would pretty much agree with this rating. The episode was not a spectacular or action-packed blockbuster like we’ve gotten used to in previous seasons, and that is more or less to be expected; after the Red Wedding, the story of Game of Thrones does slow down quite a bit. The episode was still very strong in other ways, though, namely developing both new and established characters.

Most of the episode is set in King’s Landing, and its most prominent feature is the moment I’ve been waiting three whole seasons for; the introduction of the last of Westeros’s great houses, and one I claim as my personal favorite, House Martell of Dorne. From the moment he enters the screen, Prince Oberyn Martell is depicted as a suave, mysterious and dangerous man on a mission; that is, to get revenge for his family’s dishonor and to kill anyone who stands in his way. Oberyn is out for blood and harbors a hatred for Lannisters, something that causes Tyrion no end of discomfort as he tries to make the Martell prince feel at home.

Oberyn immediately stirs up trouble by picking a fight with two Lannister soldiers and critically injuring one of them, but not killing him, and forcing the other to flee for help. The Martells are different from any of the families introduced in the series thus far; they have no skin in the game of thrones, and are thus complete and total wild cards, introducing a new unpredictable and exciting element to the show. Plus, their vendetta against House Lannister ought to cheer up anyone who likes to see the lions of Casterly Rock squirm for once. One thing is for certain; the Martells are here to stay, and they will certainly make an impact. As Oberyn ominously warns Tyrion, “The Lannisters are not the only ones who pay their debts.”

The episode is filled with other great character moments as well, especially between some of the established pairs we have learned to love so well. Jaime Lannister continues to show his newfound vulnerability as he is hurt by Cersei’s rejection and his father’s plan to remove him from the Kingsguard; this ends with Tywin ostracizing Jaime from the family, although Jaime keeps his position and Tywin leaves him a new sword (ironically made from the remnants of Eddard Stark’s great sword Ice), saying “A man with one hand and no family needs all the help he can get.” Jaime is also berated by Joffrey for his failures against the Starks, but admirably manages to keep his cool; he is even fitted with a new golden prosthetic hand for his trouble, giving him some semblance of dignity. He also talks with Brienne again in the antagonistic but still brotherly way that we have come to expect from the two characters; you can tell that their adventures together have left them with a deep respect for each other that they just can’t bring themselves to admit.

In other character news, Tyrion struggles with his relationships with Sansa and Shae, who tries to seduce him and is infuriated when Tyrion does the honorable thing and rejects her advances. On the other hand, it’s good to see Sansa cheered up a bit when a former fool whose life she saved returns her kindness by giving her his treasured family necklace. It was also nice to have more character development for Grey Worm and Daario Naharis as they compete for Daenerys Targaryen’s affections; Grey Worm is slowly becoming more human and less brainwashed soldier, while Daario is his classic flirtatious and quick-witted self. Nice save with the flowers, by the way. Also, Dany’s insistence on seeing every one of the dead children on the road to Meereen shows she is making huge strides as a leader, but the scene where her dragons snap at her gives some dark foreshadowing that she may still not be in total control.

The episode did have a few weak points, though; the scene of Jon Snow’s trial by the officials of the Night’s Watch is really nothing to write home about. We knew he wasn’t going to get into trouble anyway, right? He’s pretty much the only competent soldier they have. And Ygritte and the Wildlings make a brief return, if only to demonstrate just how desperate their situation is and how different the Free Folk really are (aka, they’re apparently down with cannibalism). Oh, and there’s a brief mention that Ygritte might still have feelings for Jon; big shocker there, but as things stand I’m saying there’s not a chance.

The biggest moment came at the end of the episode, when Arya Stark got to show her dark side by helping The Hound kill a group of Lannister men. Coming face to face with the man who stole her sword and killed one of her best friends, Arya shows immense pleasure in taunting him before sliding Needle slowly through his throat. It was gratifying and bone-chilling to see Arya, both a young girl and a Stark, dish out some punishment for a change; maybe hanging out with The Hound is finally rubbing off on her.

Overall, the show does a pretty good job of refreshing our favorite characters and building up to what will obviously be the big focus of this season: Joffrey and Margaery Tyrell’s wedding. If this series has been any indication, it won’t be anything like we expect, and with the drop in action this season, it will be interesting to see if the show’s pacing can stay as strong as we’re used to.