While Kill La Kill has been grabbing the lion’s share of attention this season, it’s not the only series to offer clever commentary on a well-established genre.  In contrast to Kill’s shark-jumping action parody, Samurai Flamenco has been subtly questioning the core elements of masked superhero franchises like Kamen Rider.  While the show’s biggest strength has been its witty deconstruction of the classic “monster of the week” format, Samurai Flamenco has also been making some interesting statements about heroism and the differing interpretations of justice.  The show’s three protagonists each embody a unique vision of what a “hero” should be, so I thought I’d take a look at what it has to say about each one. 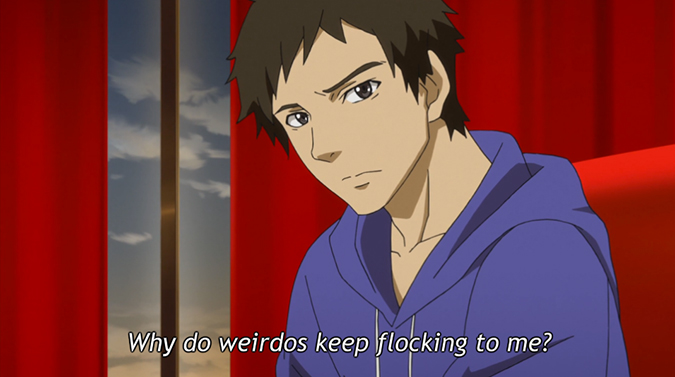 Eat your heart out, Agent Coulson.

While Samurai Flamenco is primarily focused on costumed superheroes, the first defender of justice the audience sees in action is far less flashy.  Goto is a regular beat cop who starts the series working out of one of those tiny corner police stations that seem to appear in every single anime series ever.  As he gets tangled up with the show’s other heroes, Goto quickly becomes the show’s voice of restraint, often making the argument that it’s impossible to enforce every law and regulation a modern society has in place.  He’d sooner ensure a drunken salaryman makes it home safe than arrest him, and he’s okay with letting minor infractions slide if police resources would be better used elsewhere.  Where other characters have an ironclad “see evil, fight evil” policy, Goto focuses on the bigger picture and tries to work for the greater good.

The series seems to take a mixed view of Goto’s approach to fighting injustice.  On the one hand, he’s clearly portrayed as the most rational of the protagonists, and often gets stuck resolving problems created by the other characters.  The costumed heroes can only be successful with the help of the police.  On the other hand, the series makes a pointed argument that Goto’s approach will never lead to any kind of change in society.  The people of the city know that the police will deal with any major criminals, but they also feel as though they can get away with small misdeeds since no one will bother to stop them.  Goto may be able to alleviate the symptoms of evil in society, but the show’s writers argue that he can never cure it.

The Flamenco Girls: The Armed Vigilantes 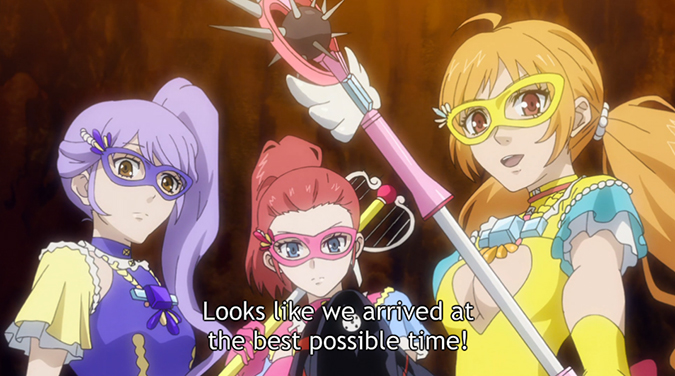 Three idol singers roll up to a crime scene in a pink Hummer.  Dressed as masked magical girls, they beat the bad guys to a pulp with the help of taser-based weaponry.  It’s not a setup for a cheap joke about anime tropes; it’s business as usual for the Flamenco Girls.  While the lead singers of Mineral Miracle Muse were initially far better equipped to fight crime than the show’s titular hero, they became stuck in the role of sidekicks by virtue of being second to appear on the scene.  Nevertheless, Mari, Moe, and Mizuki still prowl the city streets, looking for opportunities to ambush and incapacitate criminals.  If they happen to protect the innocent in the process, then all the better.

While they may be as close as Samurai Flamenco ever gets to a comedy relief team, the Flamenco Girls form an important part of one of the series’ most important debates.  By habitually applying excessive force, they ensure that their efforts will be successful, and their violent brand of justice ends up being a deterrent to would-be criminals.  However, the show seems to argue that the shock and awe approach doesn’t make someone a hero.  While the Flamenco Girls are able to defeat villains easily, they never receive the fame and admiration that Samurai Flamenco gets.  Beating up bad guys may stop crime and garner attention, but it won’t inspire anyone to work for good. 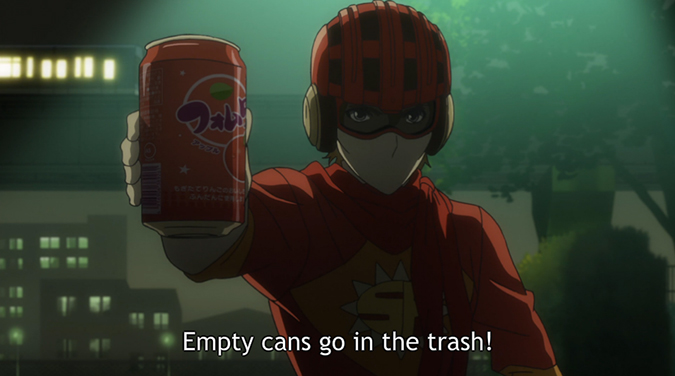 This isn’t a clever one-liner. He’s seriously telling someone not to litter.

When we first meet Masayoshi Hazama and his costumed alter ego, he’s essentially a punch line, by which I mean he gets beaten up repeatedly for the sake of comedy.  However, his early failures in combat bring out what makes him unique among the show’s heroes: he would rather lose a fight than do nothing at all.  Samurai Flamenco’s initial success lies in getting people to talk about him, and, more importantly, what he’s standing up for.  Because he starts his career by hassling jaywalkers and umbrella thieves, Samurai Flamenco shows people that not having to do the right thing is no excuse for not doing it anyway.  His unique style of heroism earns him support from others, who help him become more capable of actually fighting against evildoers.

As the title character, Samurai Flamenco naturally ends up representing the show’s favored form of heroism.  What makes him different from the others is that he fights against the absence of good, rather than simply going after evil directly.  We get to see his crusade for justice gather support from the public, who start trying to emulate his focus on doing the right thing.  Still, that doesn’t mean the series lets Samurai Flamenco off the hook for his own mistakes.  He’s constantly in over his head, dependant on the other heroes and an increasingly awesome arsenal of office supplies to keep him alive.  Sure, he’s the only one who can change the world, but he literally has to be crazy to try, and relies on cooler heads to support him.

Much like its titular hero, Samurai Flamenco isn’t without its flaws (initially slow pacing, inconsistent animation quality, etc.), but there’s still a lot to like.  If you enjoy superhero stories for the moral questions they present, it’s definitely worth your time.  And if that doesn’t convince you, I have two words: stapler nunchucks.

Kawaii Overthink is written by Paul Jensen. You can follow his ramblings about anime on Twitter.
We’re now part of Right Stuf‘s affiliate program. Go buy some awesome anime merch and make us some money! Please?