Ah, E3. That magical time of year when we all run around in happy circles upon learning of small changes to our favorite gaming genres and franchises, then promptly turn around and accuse everything else of being the same as last year. A time when gauntlets are thrown, promises are made, and forums light up with an extra level of bitter fanboy rivalry.

For Xbox One gamers, particularly those of us with race fuel running in our veins, this year’s E3 is the stage for a battle for our attention, which will become a battle for our wallets this fall. Forza Horizon 2, the sequel to Forza Motorsport’s likable open-world cousin, finds itself at odds with Project CARS, the latest challenger in the driving simulator genre. Both promise to be A-list titles, which can only mean one thing: IT’S AN E3 SHOWDOWN! 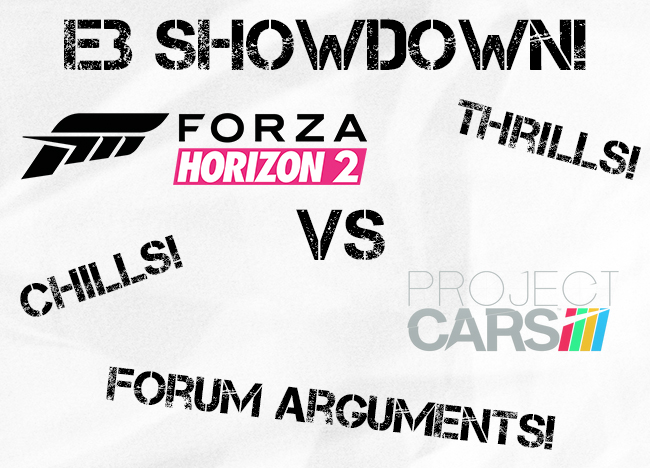 IN THE RED CORNER: The console exclusive! The open-world wonder! Forza Horizon 2! The latest member of the Forza empire promises a genuine next-gen experience, dropping the technical prowess of its Motorsport sibling into a virtual Southern Europe, complete with changing weather (finally), a day/night cycle, and seamless transitions between solo driving and multiplayer racing. Also, it’s got a shiny new Lamborghini as its four-wheeled cover model.

FH2 looks to expand on the best parts of its Xbox 360 predecessor. The world is bigger and offers more freedom of exploration. The hidden barn finds promise to include cars entirely new to the franchise. The Horizon music festival is back, along with a wider range of DJ-curated music to drive to. Best of all, the insane car-vs-not-a-car races look to be even more delightfully over the top than before, with stunt planes leaving colored smoke trails overhead. Did I mention we finally get to play Forza in the rain?

IN THE BLUE CORNER: The multi-platform challenger! The super simulation! Project CARS! Already the pre-release darling of racing-wheel-owning PC gamers, CARS aims to shake up the racing sim world and become the newest big hitter on a variety of platforms. With a strong lineup of GT, open-wheel, and endurance prototype cars, it looks to bring a professional motorsport attitude to a variety of iconic tracks.

Project CARS appeals to the perfectionist inside every racing gamer. Without car upgrades or modifications, it shifts the focus to an elaborate tuning and setup system that will leave virtual mechanics forever chasing the perfect combination of settings. The focus on racing circuits over open-world exploration will have serious drivers pursuing the perfect timed lap or come-from-behind race win. If you enjoy trying to get things exactly right, Project CARS appears to be, for lack of a better term, the perfect game.

Hang on a minute. I’m not sure these two games need to compete at all. They’re different enough in their approaches that they might just offer complementary experiences. FH2 looks to embody production car culture and open-road improvisation, while CARS focuses on professional-level motorsport and precise circuit racing. I hate to say this as an analyst in search of conflict, but might there be a place for both in Xbox gamers’ hearts? Instead of splitting into opposing camps and holding bitter Internet debates, is it possible to take a step back and hope for both games to succeed? Maybe, just maybe, there could be space on our shelves and our hard drives for two driving games.