Several high-profile racing games are slated to come out this fall, including The Crew and Forza Horizon 2. Each offers its own focus and unique features, but one subject has been touched on repeatedly as these titles approach completion: community. With both touting their particular takes on social interaction and player collaboration, an interesting question comes to the fore. Interacting with other players is simple enough, but cooperating in an inherently competitive genre is something else entirely. Even in a team situation, only one person can cross the finish line first. Can a racing game ever be truly cooperative?

Get back here and let me help you!

Perhaps it’s best to start by looking at genres more traditionally associated with cooperative play: Role-Playing Games and First-Person Shooters. RPGs encourage gamers to cooperate by implementing a player class system. In theory, no one class has a skill set that allows it to succeed on its own. Magic users need fighters to distract the enemy, and the fighters in turn need healers to help them soak up damage. Because it’s impossible to win alone, working with other people to achieve common goals is the natural style of play. An FPS may also throw some class-based skills into the mix, but it’s more often a simple numbers game that forces players to collaborate. You and your partner might both be firing the same kind of bullets from your assault rifles, but neither of you can personally deal enough damage to kill all the bad guys before they kill you. In order to deal with coordinated attacks from a large number of enemies, players must work together to maximize their offensive abilities. Whether in an objective-based or deathmatch situation, having an ally can double a player’s chances of victory.

The trouble is, neither of these approaches works with a group of racing drivers. A particular car may specialize in top speed, handling, or endurance, but these aren’t the same as the different skills of RPG classes. I may have a super-lightweight track car, but I can’t use that extra grip to help someone in a dragster make it through a series of tight corners. My teammate might show up in a dump truck, but he can’t use it to hold up our opponents unless it’s the widest dump truck in human history. By the same token, the coordinated tactics of an FPS team lose much of their potency when firepower gets swapped out for horsepower. Two machine guns with 100 bullets apiece can put 200 rounds into the enemy, but two cars with 300 horsepower apiece don’t get to combine for 600 horsepower on the straights. 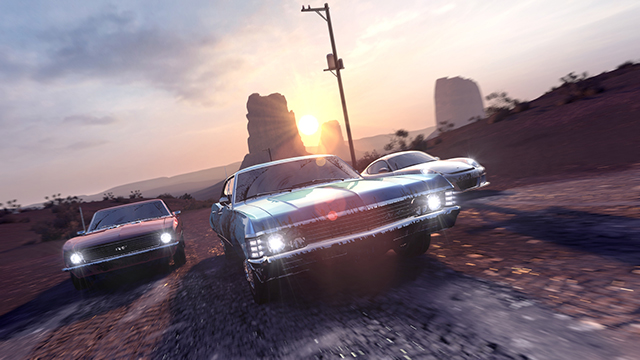 Besides, are Porsche Guy and Muscle Car Guy ever going to get along?

Even in situations where two racers might work together, one particular problem will always persist. When victory is measured by reaching the finish line first, teammates will always compete with one another. Take a look at motorsport history and you’ll find plenty of legendary rivalries between drivers who were employed by the same team. One RPG player may land the final hit on the boss, or one FPS player may get the most kills, but the spirit of the game remains primarily cooperative with a bit of competition for added flavor. In racing, it’s the opposite. We’re always competing, even if we occasionally work as something resembling a team.

In the past, the best way to get drivers to collaborate on the virtual road has been by changing the rules to resemble something other than a professional circuit race. Objective-based gametypes have been successful in fostering cooperation in the past, and The Crew seems to be following this tried and true route. Modes that require forcing a particularly tough vehicle off the road or driving over lots of collectable items in a short amount of time have “cooperation required” written all over them. An E3 walkthrough video shows how this would work, and is mercifully free of voice actors pretending to be the people playing the game:

Another option for getting racing gamers to collaborate is to let them do so off the track, and Forza Horizon 2 seems to be championing this approach. Players can form Car Clubs, which seem similar to FPS clans or RPG guilds. Think of The Crew’s titular groups, but on a larger scale. Racing is certainly part of these communities, but what catches my interest is the concept of the Car Meet. The idea is to create an in-game social space for showing off and talking about paint schemes and tuning setups with other Club members. Look at photos and videos of a race circuit during the buildup to an actual race: competitors are hanging out and chatting about the extremely fast driving they’re about to do. Doing this in a video game is a fascinating idea, and I’m curious to see if it will encourage more collaboration than the faceless multiplayer lobbies of previous console generations. Maybe the solution to cooperative racing games something as simple as letting us get out of the damn car.

Deep down in my turbocharged V8 heart, I suspect that games about driving fast will always be a primarily competitive experience. After all, there’s only room on the top step of the podium for one person. Still, the ideas espoused by The Crew and Horizon 2 are exciting, and I’m eager to see how much they can shake up the genre. Not as eager as I am to drive an Audi R8 on a rainy night in Forza, but eager nonetheless.