Genshiken holds an interesting and somewhat timeless position in the world of anime and manga.  It follows the members of The Society for the Study of Modern Visual Culture (abbreviated as the Genshiken), a college club dedicated to geeking out over each and every aspect of otaku culture.  The original manga series began over ten years ago, and recently returned with a fresh “Second Generation” of characters.  While the series is mostly a self-deprecating celebration of geekiness, there are some important life lessons hidden away in its slow-paced plot. 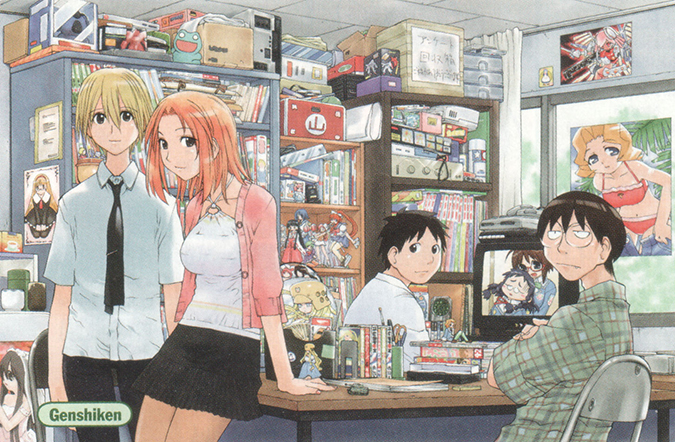 Accept yourself for who you are.

I suppose there are really two parts to this one.  The first involves acknowledging the things you’re passionate about, even if you can’t explain why you like them.  It’s a character arc that’s repeated multiple times in Genshiken: Sasahara, Ogiue, and Hato all struggle with their “strange” interests.  The thing is, you can’t just stop yourself from liking something that most people think is weird.  As several characters observe over the course of the series, people don’t just wake up one day and decide to start or stop being otaku.  It’s just something they are.

At a deeper level, Genshiken also addresses the need to deal with aspects of your personality that you may prefer to ignore.  Try though he might, Madarame is never able to completely bury his feelings for Kasukabe.  By the same token, there’s no magic switch that Ogiue can flip to get over her past emotional dramas.  It takes a great deal of courage and support, but they both eventually acknowledge these parts of themselves and come to terms with them.

Not everyone likes the things you care about, and that’s okay.

Genshiken is never shy about challenging the things its characters are passionate about.  One of Kasukabe’s primary roles in the series is to act as the voice of the dreaded “mainstream” society.  She shines a light on all that is strange and creepy about anime and manga fandom, and refuses to let the other characters (or the audience) off the hook without a fight.  Her rants are Genshiken’s way of reminding us that there will always be people who don’t understand how anyone could possibly become obsessed with making Gundam models or cosplaying as video game characters.  In the end, though, Kasukabe shows why seeing eye to eye isn’t always a requirement, as she develops a grudging fondness for the Genshiken members.

Less obvious but far worse in his treatment of our otaku heroes is Haraguchi, the “phantom member” of every geeky club on campus.  He bosses the manga club around, and tries to force his way into taking charge of the Genshiken’s first doujinshi.  It’s clear that he’s just in it for the money, and we never once see him display any interest in the media that he seeks to profit from.  Not only does he look down on otaku, he thinks that he can use their passions to make a quick buck (or yen, I suppose).  Even the anti-geek Kasukabe hates his rotten guts.  You can’t let jerks like this get you down, however, because…

There are people like you out there, and you’ll meet them sooner or later.

Being a fan of manga and anime, especially outside of Japan, can be a lonely experience sometimes.  Even if most folks are happy to accept your hobbies, it can be tough to find people who share your particular brand of geekiness.  When new club members are introduced in Genshiken, we often get the sense that these newcomers have gone through a similar experience.  From Sasahara in volume one to the new freshmen of the Second Generation, just about everyone arrives in search of someone to talk to. 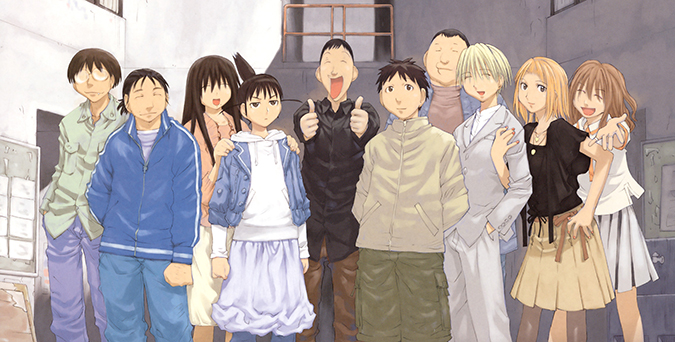 Just as everyone finds a home in the Genshiken clubroom, there’s a group of good friends out there waiting for every real-life otaku.  Don’t believe me?  Go to a big convention, or show up to a meeting of a college anime club.  Look around and try to count the mind-boggling number of people who share your passions.  It may not happen right away, and you may have to put in some effort, but it will always be possible to meet people who are just like you.

When I watched the simulcast of Genshiken Second Season in 2013, it had been a while since I’d interacted with the franchise.  I had fond, if fuzzy, memories of the original cast, and expected the new show to be a case of “second verse, same as the first.”  But, between the original upperclassmen graduating and new members joining the cast, everything was just different enough to require some getting used to.

It reminded me of my first post-graduation visit to my college earlier that year.  It had been just under two semesters since I left, but the world had continued to turn in my absence.  It was a strange experience, and it wasn’t until I went through the same thing with Genshiken that it really sunk in.  Things change when you’re not paying attention, but you can’t let the past stop you from enjoying the present.

Failure is free.  You have to earn success.

Now that I’ve been out in the real world for a while, the job-hunting woes of characters like Sasahara and Madarame hit home more than they did back in the day.  The same thing goes for the club’s struggles to make and sell their doujinshi.  Genshiken is happy to heap all kinds of trouble onto its characters, and shows them failing when they aren’t prepared to face reality head-on.  Finding success anywhere is tough, and taking on a creative project can be especially daunting.  If you’re looking to experience failure, try making a half-hearted attempt at doing something.  The world is more than happy to hand you a generous portion of defeat.

As the characters in Genshiken learn, the best (and perhaps only) solution is to do what you care about, as best as you can, with as much care and attention as you can muster.  You still might not get your dream editor job, or your manga might not be a big hit, but the only way to give yourself a chance is to go at it with everything you’ve got.

The Genshiken manga and anime are available from Right Stuf.