With each new anime season comes a wide array of comedies vying for attention: the romantic comedies, the parodies, the harems and reverse harems, the slices of life, and so on.  Each mixes comedy with an additional element in order to create a (hopefully) stronger final product.  From time to time, though, a series comes along with the audacity to bet everything on its sense of humor.  Much like a poker player who goes all in, these shows tend to either succeed in incredible fashion or fail completely and slide into obscurity.

Two shows attempting to walk this less-traveled path in the current season are D-Fragments and Tonari no Seki-kun.  Both display common characteristics of their genre: rapid-fire jokes, characters with clearly defined comedic roles, and an eager willingness to ignore reality whenever necessary.  While they have all the visual trappings of a high school rom-com, their settings merely act as a stage for the comedy routines carried out by the characters.  Having chosen to live or die on the strength of their jokes, these shows must work harder than most to hold viewers’ interest.  In order to see whether or not they’re successful, it’s helpful to look at a recent example of what this genre looks like when it’s done right.

Tall images clash with the layout for these articles, but this was too adorable not to include.

The golden standard I’ll be holding our challengers up to is Nichijou, translated as My Ordinary Life for its English simulcast.  The show ran back in the spring and summer of 2011, and I have yet to see another series outdo it in terms of pure comedy.  A supremely talented animation team worked wonders with Nichijou’s visual gags, and the writing shifted smoothly back and forth between everyday observational humor and completely unchained lunacy.  What really made Nichijou work, however, was its complete dedication the art of comedy.

Much like the way in which Space Dandy acts as a delivery vehicle for self-contained sci-fi stories, Nichijou existed to experiment with a wide variety of jokes.  It had no problem whatsoever spending minutes establishing an entirely new setting and group of characters for the sole purpose of (literally) dropping a single sight gag onto its main cast.  The joke itself wasn’t especially funny, but it didn’t need to be.  The point was, I suspect, to secretly enlist the viewer as that segment’s “straight man” character.  By inevitably shouting, “You spent a quarter of the episode setting up THAT joke!?” at the screen, we unwittingly became part of the act.  Nichijou missed as often as it hit the mark, but it succeeded at having lasting appeal because it did legitimately original and interesting things with its humor. 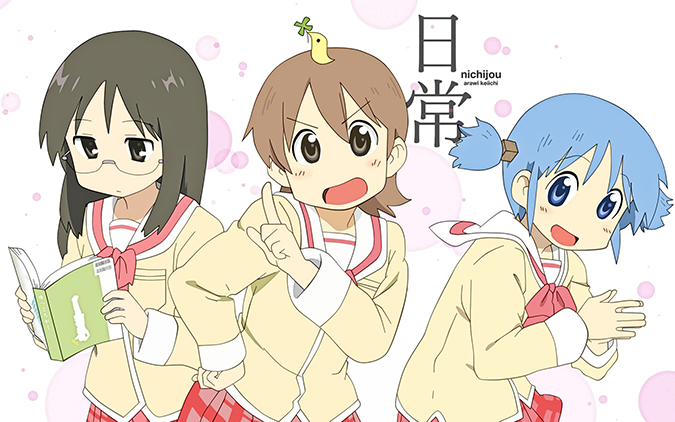 Everyone who watched this show now has the theme song stuck in their heads. Bwa ha ha.

So, what of the two Winter 2014 contenders?  Neither is quite as bold in its execution as Nichijou, but both have their strengths.  Tonari no Seki-kun has a standard formula that it adheres to in each episode, but it executes it well and benefits from a short running time.  We know from the start that Seki will distract Rumi by doing something ridiculous during class, but it’s worth 8 minutes a week to see what happens.  Seki-kun is hardly an ambitious show, and I doubt it could hold up as a half-hour program.  Thankfully, it doesn’t need to, and it succeeds as a result. 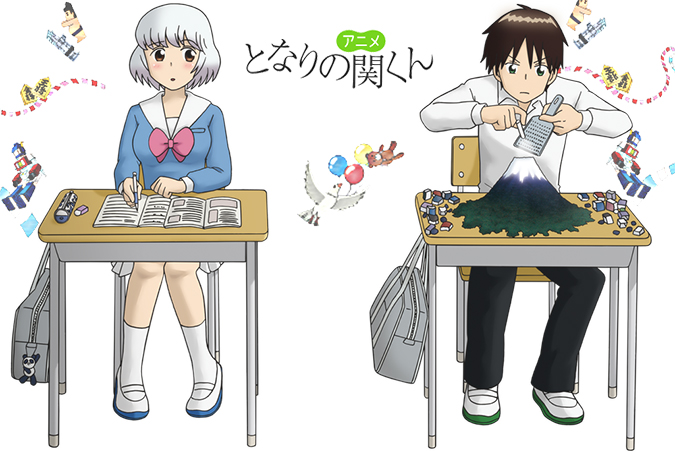 How does Seki get all his stuff into school in the first place? The world may never know.

As a full TV series, D-Fragments has a much higher hurdle to clear.  It also scores very few points for originality, as many of its comedic elements have been used by other shows.  Good-hearted tough guy butting heads with a group of quirky girls?  Hello, School Rumble.  Ridiculous (and often harmless) juvenile delinquents?  Hey there, Cromartie High School.  Constant jokes at the expense of a busty female character?  Howdy, every harem series ever made.  What saves D-Fragments is the way it uses these old ingredients.  We can predict what sort of joke the show is building up to at any given moment, but the writers know this and use it to surprise us with a slightly different punchline than what we’re expecting.  It’s effective enough in the moment to provoke fairly regular laughter, although I doubt a second viewing would be as enjoyable.  In the end, D-Fragments is hoping you’ll come for the jokes and stay for the occasionally sweet moments between the characters.  It’s essentially a romantic comedy disguised as a high-energy joke barrage.  Certainly not an unqualified success as pure comedy, but an enjoyable show in its own right.

It’s hard to build up a loyal fanbase when all you do is tell jokes, and I doubt Seki-kun or D-Fragments will move as much merchandise as comedy-drama hybrid shows like Nisekoi.  Still, whether or not you enjoy them, single-minded comedies are good for the anime industry as a whole.  They’re able to serve as a kind of proving ground for original humor, and the successful material can be adopted by other shows.  Maybe someday they’ll help us move on from the sigh-inducing “hapless guy falls headfirst into girl’s bosom” routine.  Hey, a critic can hope.