This year’s first F1 pre-season test wrapped up last Friday, and the four-day session in Spain has given the sport’s fans plenty to argue about.  We’ve learned what the new cars look like, and gotten our first impression of how well new engines are working.  In both an aesthetic and mechanical sense, it’s not a pretty picture for a number of teams up and down the grid.  Time to crunch some numbers and stir up some controversy. 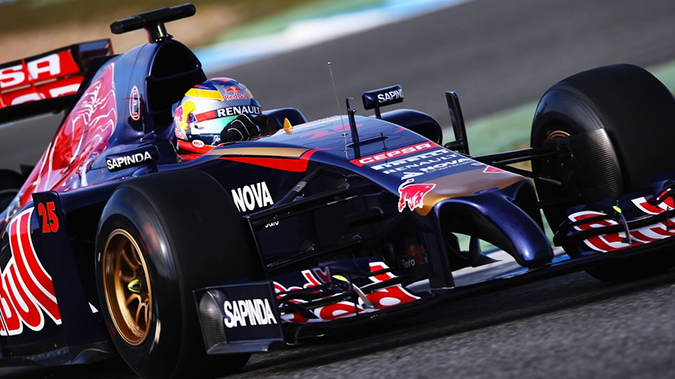 We were warned that the new regulations might result in some strange-looking cars, and lo, it has come to pass.  Most of the teams have ended up with either a massively stepped nose (Ferrari, Mercedes) or a suggestive-looking protuberance hanging off the front wing (Caterham, Toro Rosso).  The reason for these odd designs is a headache-inducing mix of detailed rule changes and aerodynamic principles, but the basic causes and effects are pretty simple.  New rules require the front of the car to be lower than before, which will hopefully reduce the chances of one car getting airborne after rear-ending another.  This is probably a good idea as far as safety goes, but having a low nose makes it harder for the teams to manage the flow of air over and under their cars.  This means less downforce, which means less grip, which means slower lap times.  As a result, the teams have tried to make the low part of the car’s nose as small as possible, which gives us things that look like anteaters and vacuum cleaners.

Of course, a car’s appearance isn’t a particularly big deal as long as it wins races.  Unfortunately, this won’t provide much comfort to the teams using Renault engines.  The French company’s new V6 is evidently prone to excessive vibrations that cause problems with the fancy new energy recovery systems. (I’ll leave it up to you to combine jokes about the Toro Rosso’s nose with the phrase “excessive vibrations,” dear reader.)  As a result of having malfunctioning engines, the Renault-powered teams weren’t able to do anywhere near as much running as their rivals.  How bad was it?  The 4 teams with Mercedes engines covered 875 laps, the 3 Ferrari teams covered 444, and the 3 Renault teams managed a measly 151.  Perhaps that number might have been a bit higher if Lotus had bothered to show up, but the difference wouldn’t have been huge.

The RB10 in motion, a rare sight at the Jerez test.

Perhaps worst off are the defending champions at Red Bull Racing.  On top of the previously mentioned issues with their Renault engines, the team has run into some serious overheating issues.  How serious?  Well, serious enough that they only managed to complete 21 laps in 4 days, and gave up halfway through the last day to pack up and go home.  Anyone who’s followed the sport over the last few years will recall that the folks at Red Bull have always had some issues with cooling, but this seems far worse than the occasional toasty alternator.  They’ve got the design talent and the budget to fix the car by the first race of the season, but they’ll be at a disadvantage in comparison to their rivals.  McLaren, Mercedes, and Ferrari all completed over 200 laps during the first test, which makes for 200 laps’ worth of testing mileage that Red Bull will need to make up during the next two pre-season sessions.  While the other frontrunners can move on to making their cars faster, the defending champs have yet to finish making their car functional.

So, is anyone looking particularly impressive after these first four days?  Well, it’s difficult to say.  Fast pre-season lap times are notoriously unreliable, especially at the first test session.  Remember that time we thought McLaren and Williams were going to have a good year in 2013?  Still, we can draw a few basic conclusions.  First, the big spenders at the front of the grid will probably continue to dominate unless a midfield team can pull off a car design miracle.  Second, McLaren’s decision to give Kevin Magnussen (I’ve taken to calling him “K-Mags”) a race seat seems to have been a good one.  The Danish rookie worked his tail off during testing, and set the fastest overall lap time.  Only Alonso and Rosberg completed more laps.  Finally, I still have no idea how to pronounce Daniil Kvyat’s last name.  Good thing I only have to spell it in order to write this column.

Back from its winter hiatus, Pit Box One is written by Paul Jensen. You can follow his thoughts on video games and motor racing on Twitter.