As the first race in a season full of new technical regulations, the Australian Grand Prix was always going to be a learning experience for everyone involved.  Now that the champagne has been uncorked and the teams have moved on to the next venue, it’s time to take a look at what we learned from the start of F1’s new era. 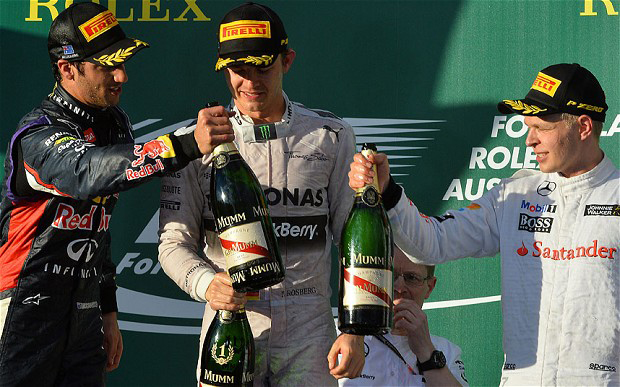 All aboard the power train.

There was a great deal of moaning about the new turbocharged V6 engines leading up to the start of the season.  The general consensus was that they were going to sound like blenders and that the majority of the cars would end the first race in a cloud of smoke.  As it turns out, reliability isn’t as much of a concern as many feared, even with the “problem child” Renault units.  Mercedes in particular have come up with an impressive piece of engineering, and the torque from the hybrid power units has had an unanticipated benefit.  With the cars constantly on the verge of spinning out, the world’s best drivers are now required to demonstrate their skills at every single corner.  And while your mileage may vary, I think the new engines sound pretty darned cool.

The Australian Grand Prix ended up being something of a showcase event for the sport’s rookies, along with some faces who had previously flown under the radar.  Kevin Magnussen made it abundantly clear that he deserves to start his career at McLaren, and Daniel Ricciardo has already justified Red Bull’s decision to promote him to the senior team.  The absurdly young Daniil Kvyat put in an excellent points finish in the Toro Rosso, and Valtteri Bottas finally showed what he can do with a competitive car.  With veterans like Vettel, Hamilton, and Massa stranded on the sidelines, the new kids on the block put on one heck of a show.

Time to invest in silver.

After four years of Red Bull Racing acting as the sport’s golden standard for performance, it looks like the silver teams have shot up in value for 2014.  Nico Rosberg’s crushing win showed just how fast the Mercedes is this year, while the equally shiny McLarens showed that the team is once again a force to be reckoned with.  Anyone still unconvinced that this year’s winning car will be painted silver clearly didn’t watch the race…

White is the new black.

… Unless they saw the incredible comeback drive from Valtteri Bottas.  After dropping to last place with a thoroughly deceased tire, the Finn stormed his way up the field to finish comfortably in the points.  If the black and gold Lotus cars were the promising underdogs last year, the revitalized Williams organization has taken on that mantle for 2014.  With a beautiful livery, a talented veteran, and a flying Finn, the popular team may be on its way to a comeback season.  After all, they’ve already scored more points than they did over the entire 2013 season.

With his impressive drive to second place, Daniel Ricciardo did what Mark Webber never could: score a podium finish at the Australian Grand Prix.  Or, rather, he would have if he hadn’t been subsequently disqualified by the FIA.  The race stewards declared that Ricciardo’s car ran with an illegally high fuel flow rate, while Red Bull Racing maintains that the car was fine and the fuel sensor was faulty.  The disqualification has been appealed by the team, but whatever the final decision may be, one thing is certain: Australian drivers, especially those employed by Red Bull, just can’t catch a break.