Earlier this month, Scott Dixon clinched the 2013 IndyCar series title in dramatic fashion at the last race of the season.  Just over a week later, Sebastian Vettel secured the Formula One drivers’ championship with three races remaining in the season.  Both men performed incredibly well this season, so why was Vettel able to complete his goal with so much more time to spare?  In many ways, the answer illustrates a difference in philosophy between the two sports.

Let’s start off with the similarities between these two athletes.  Both Vettel and Dixon drive in physically demanding race disciplines against deep fields of champion-quality opponents.  Both men have shown incredible speed, coupled with the ability to get the best out of a good car.  Finally, both of them have earned their respective titles through talent and hard work.

So, what let Vettel wrap up his season early while Dixon’s campaign went down to the wire?  Going by numbers alone, Vettel won races throughout the season while Dixon had a comparably terrible start to the year, with only one podium finish in the first ten races.  This meant that while a dominant late-season performance was helpful to the German, it was absolutely necessary for the New Zealander.  Of course, the difference in race results was only an effect of the biggest factor, a fundamental difference between F1 and IndyCar. 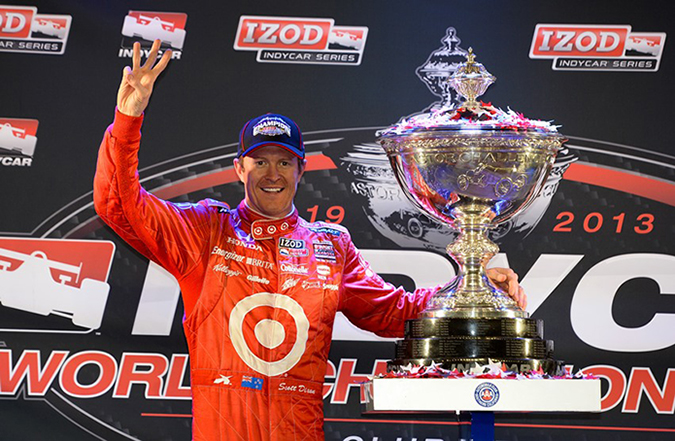 New rule: the defending champion must carry the giant trophy in his car during races.

Each team in Formula One must design and build its own chassis, while every competitor on the IndyCar grid uses the same Dallara DW12 chassis with either a Honda or Chevrolet engine.  Yes, IndyCar teams are responsible for tuning the mechanical and aerodynamic elements of their vehicles, but they are all starting with essentially the same equipment.  Because a Formula One team needs the staff and resources to build and set up set up their cars while and IndyCar team only needs to do the latter, an F1 driver from a big team will have an easier time beating the competition.  Both Vettel and Dixon benefitted from driving for some of the strongest teams in their respective sports, but the greater advantage went to Vettel.  While his Red Bull helped him leave the field in the dust, Dixon had to rely on his team to do a better job of understanding their DW12 than the competition. 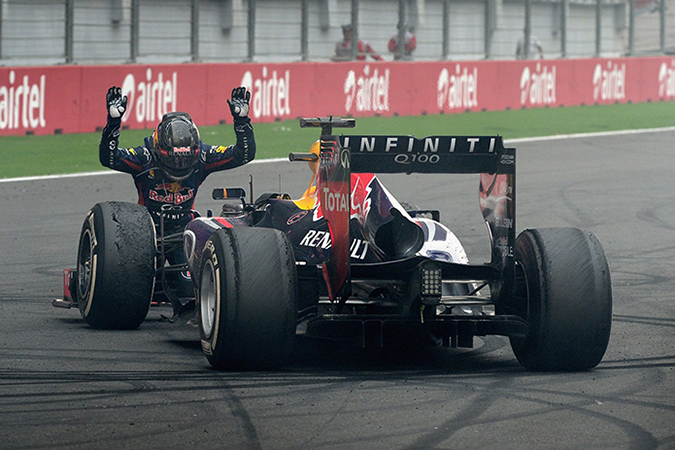 Thus we arrive at the big question: does this difference in regulations make one sport better than the other?  Some would argue that the added technical challenges of F1 make it more interesting, while others would say that a greater equality of resources gives IndyCar more exciting and unpredictable competition.  Both arguments have merit, and I’m of the opinion that it comes down to personal preference.  I could argue all day and not convince you that one or the other is right.

The same goes for trying to compare our two champion drivers.  Does Vettel’s consistent dominance make him better, or does Dixon’s triumph over adversity make for a more impressive result?  To be honest, it doesn’t really matter.  Both are incredible drivers who have already established themselves as legends in their respective sports, and both have plenty of time to continue etching their names into the record books.  Bring on 2014.