Way back when I was in high school (and dinosaurs roamed the earth), there was a mythical idea floating around within groups of awkward teenage geeks.  “Imagine,” we would whisper, “if the school library had… manga.”  Fueled by wild rumors that some school in some town in some state had started lending out volumes of Death Note or Dragon Ball, our minds would spin with possibilities.  Just think: a way to read all the manga we wanted without shelling out ten bucks per volume, and we wouldn’t even have to camp out in the graphic novel section of Barnes & Noble or deal with the awful grammar of pirated online translations.  Of course, it never happened in my school, and the legendary “Shelf of Unlimited Manga” remained an unfulfilled dream.

Countless eons later, enter the new online manga service from Crunchyroll.  I’ve been a paying subscriber on this particular anime streaming site for around two years now, and they’ve been doing a remarkable job of offering a huge number of simulcasts every season.  Frankly, they’re the primary reason Shark vs Anime is able to stay current with its reviews.  So naturally, I was curious to see how they intend to handle publishing manga online. 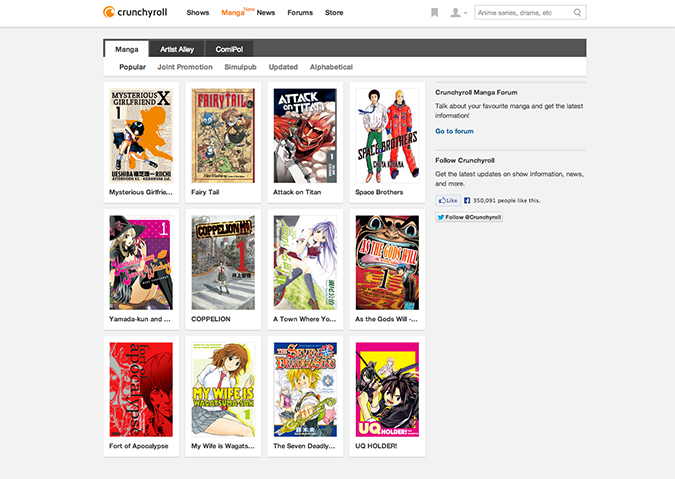 Read ALL the things!

As far as content goes, the catalog of titles isn’t huge, but a there is a nice variety of genres.  Some of the series appear to be quite good as well, and I’ve already found myself binging on the manga version of Space Brothers.  My biggest gripe thus far is that some titles have a significant gap between the current chapter and the available back issues.  I’d like to see the site fill in the back catalogs for their titles, since it’s awfully hard to follow a series that skips two dozen chapters.  Still, it’s a promising start.

On technical terms, I’m impressed with the performance of the service considering it’s only just launched.  Text is legible and translations are good, and I’ve only found one typo in around 50 chapters so far.  I’d be happy with that level of quality in a print title.  The service is stable, and the resolution is good enough to look good, even on my desktop’s enormous 27-inch monitor.  There’s a mobile app as well, which is free and functional.  Fast readers will be frustrated by occasionally slow load times, especially during peak evening hours.  I also ran into a couple of bugs with the Android app, but a recent update seems to have stabilized things a bit. 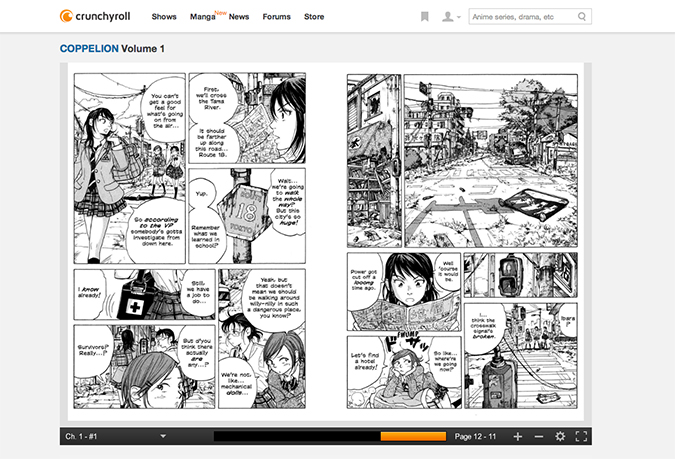 Not sure if the chapter progress bar limits or encourages binge-reading.

Given that the manga service is included with the all-access subscription that I already pay for, the value proposition for me is excellent.  I’m essentially getting more stuff while paying the same amount.  If you’ve been on the fence about subscribing in the past, the addition of manga to the site adds to the appeal, but it’s not a huge gain at the moment.  There’s just not quite enough content as of yet to justify jumping in for the manga service alone.  On the other hand, Crunchyroll’s anime catalog started out just as small, and now it’s become downright enormous.

At present, the promise is outperforming the product to some extent.  I love the idea of paying a small amount of money a month to be able to sample a wide variety of titles that I’d never have the budget to buy individually.  Just in the process of writing this article, I’ve already come across a couple of series that I’m tempted to read in their entirety.  There’s potential for a solid new business model for manga here, and Crunchyroll’s success with anime simulcasts leads me to give them the benefit of the doubt.  It’s worth seeing where this project goes, and I hope it will eventually give me a virtual version of the mythical Shelf of Unlimited Manga.