Back in the fall of 2013, an anime series called Arpeggio of Blue Steel premiered in a season filled with big-name titles.  A sci-fi series boasting some impressive naval combat sequences, Arpeggio faced stiff competition and was quickly torpedoed by fan-favorite shows from a variety of genres, including Non Non Biyori and Kill la Kill.  With the original manga now available online from Crunchyroll and on course for a print release from Seven Seas, it’s obvious why the anime adaptation didn’t fare better: it didn’t give us the whole picture. 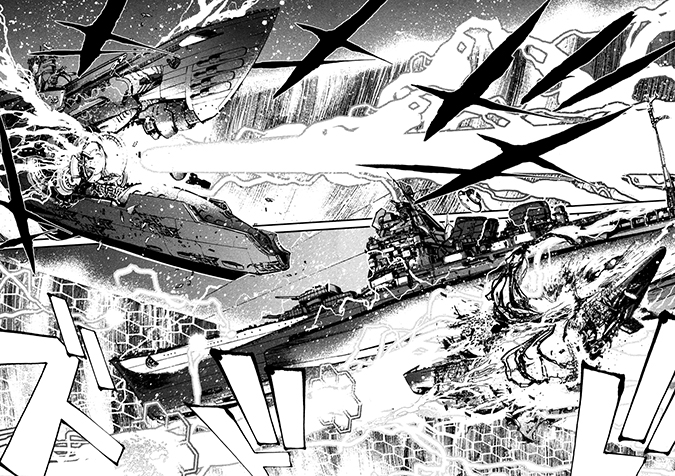 It also didn’t give us gorgeous two-page spreads like this one, but I digress.

For those who’ve neither read nor watched, Arpeggio of Blue Steel doubles down on apocalyptic scenarios.  Rising sea levels have displaced large portions of humanity and thrown a wrench into the global economy.  To make matters worse, a mysterious fleet of AI-controlled warships has blockaded every continent, cutting nations off from one another.  Each ship in the “Fleet of Fog” is controlled by a Mental Model, a physical manifestation of its artificial intelligence in the form of (what else?) an attractive woman.  When Fog submarine I-401 defects to humanity’s side, it shifts the balance of power and sets all manner of changes in motion.  Existential quandaries, geopolitical power struggles, and kickass sea battles ensue.

On paper, this should have made for one heck of an anime series, but Arpeggio of Blue Steel suffered from having to cram a complex plot and setting into just twelve episodes.  As a result, entire elements of the series’ world had to be dropped completely, while others were simplified into irrelevance.  At the same time, character development was kept to a minimum for a significant portion of the cast.  What remained were some solid action sequences, a handful of quirky AI girls, and some interesting ideas.  These alone couldn’t carry the show, and I abandoned ship several episodes early.

Around a month after the anime adaptation of Arpeggio wrapped up, Crunchyroll added the original manga to its catalog of online titles.  One lazy night, I tried out the first few chapters.  One thing led to another, and “the first few chapters” quickly became “the first twenty-four chapters.”  At around 3:45 AM, it became obvious that the manga version of Arpeggio of Blue Steel had everything the anime lacked. 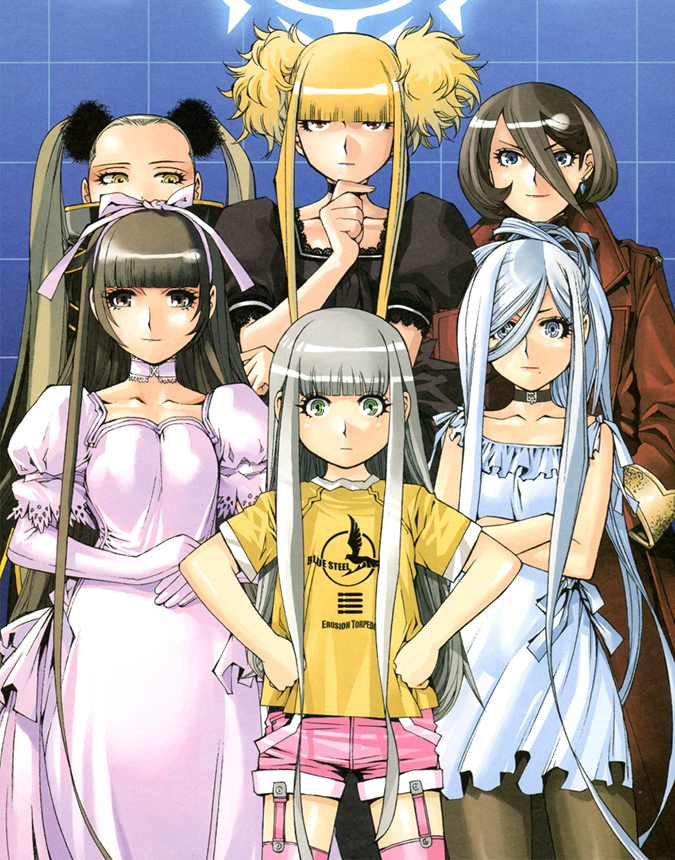 I guess ship girls are the new airplane girls.

The most immediately apparent difference lies in the depth and complexity of the series’ world.  The anime essentially boiled down to a series of fights between I-401 and around half a dozen Fog ships.  There were suggestions that human politics were also an issue for the heroes, but this mostly just served as an excuse to have a Mental Model take on some special forces soldiers.  The manga presents a much more detailed look at all sides of the conflict, an approach that makes it far more interesting.  We see power struggles within the Japanese government, rivalries amongst an expanded cast of Fog characters, and the efforts of human militaries to take on the more powerful Fog ships.  As a result, the Arpeggio manga has a living world to exist in, rather than just a sequence of events to follow.

It takes longer to notice, but the manga also devotes more effort to developing its characters.  To its credit, the anime did a respectable job with several of the Mental Models, examining their varied reactions to direct contact with humans.  Sadly, the same wasn’t true for the show’s human characters.  There was little in the way of backstory for the I-401’s crew, and they spent most of their screen time shouting expository dialogue.  The original work takes the time to develop the crew, their allies, and their enemies.  We learn more about Gunzou’s military past and his family’s connection with the Fog.  Seeing Kongou under pressure from other high-ranking Fog ships makes her more than just a standard “Destroy All Humans” villain.  Outside of combat, the sub crew gets a chance to evolve beyond their roles on the ship.  We get a better sense of where everyone is coming from, and this deeper connection with the cast causes us to be more emotionally invested in the battle scenes.

Exciting combat sequences can make a series like Arpeggio of Blue Steel good, but it’s the more subtle touches that can make it great.  It’s been a while since I’ve had such wildly divergent opinions on two versions of the same story, and it’s a testament to the quality of the manga that it so outshines a perfectly decent anime series.  I’m glad I gave this franchise a second chance, and look forward to seeing the manga’s print release later this year.

You can pre-order Volume 1 of Arpeggio of Blue Steel from RightStuf.com here.