The finale of Kill la Kill aired last week, wrapping up a journey filled with epic battles, shocking plot twists, and absurd outfits.  It’s safe to say that this show generated plenty of interest and debate amongst anime fans, and the constant buzz that surrounded it was not without good reason.  Kill la Kill carefully walked several fine lines over the course of its 24-episode run, a risky approach that ultimately helped the series stand out from the crowd.  Fair warning to anyone who hasn’t seen the final episodes: spoilers lie ahead. 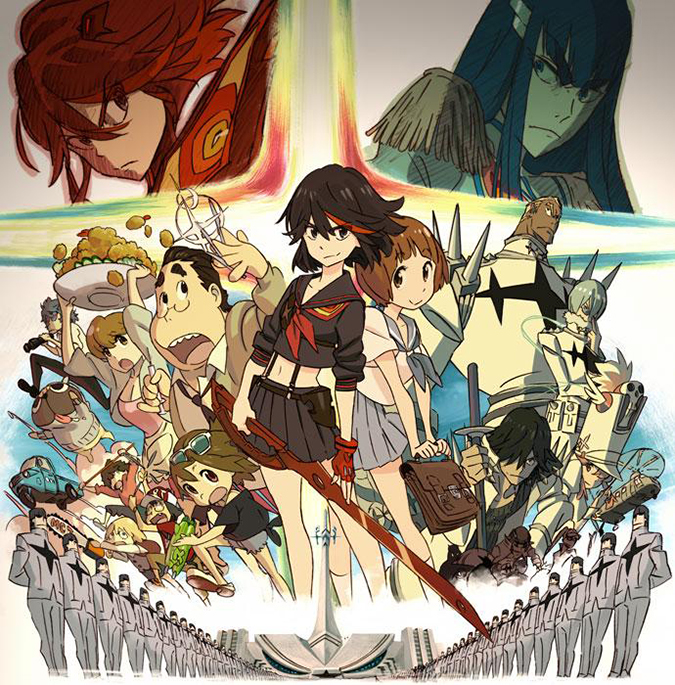 Somewhere in Japan, and anime cafe is working on a recipe for mystery meat croquettes. I guarantee it.

Kill la Kill’s first and most obvious balancing act was the way in which it constantly defied expectations while still embracing the conventions of Big Dumb Action Shows.  At first glance, we have a fairly typical shonen plot structure: a rebellious loner with special powers takes on increasingly challenging opponents in a quest for revenge, which ultimately leads to a climactic battle with the fate of humanity hanging in the balance.  Along the way, friends are made, lessons are learned, and monologues are shouted at maximum volume by heroes and villains alike.  Anyone seeking a modern version of the Dragon Ball or Fist of the North Star franchises could watch Kill la Kill and come away satisfied.

However, despite its adherence to the rules, Kill la Kill was still able to constantly catch viewers off guard.  After getting a look at the cruelty and scheming of Ragyo and Nui, many probably guessed that Satsuki would eventually come to her senses and side with Ryuko.  We expected a Return of the Jedi moment where Satsuki would interfere at the last second and help Ryuko snatch victory from the jaws of defeat.  Instead, Kill la Kill showed us how gravely we’d underestimated Satsuki when it revealed that she’d been plotting an organized rebellion from the very beginning.  Suddenly, we understood why so much time and effort had gone into humanizing Satsuki and the Elite Four, who began the series as the ostensible villains.  (See one of my past articles for just how completely the show had me fooled.)  By starting off as a “style over substance” action series, Kill la Kill set itself up to constantly surprise its audience with how clever it could be.

Viewers were also kept guessing by Kill la Kill’s seemingly contradictory efforts to empower and sexualize its female characters.  On one hand, nearly all of the show’s heavy hitters are female, a rarity in this genre.  I challenge you to find another shonen action series where the protagonist (Ryuko), best friend/love interest (Mako), rival (Satsuki), archenemy (Nui), and evil mastermind (Ragyo) are all women.  The ladies of Kill la Kill displayed a wide range of intelligence, physical power, emotional depth, and believable flaws as they stood constantly in the spotlight.  On the other hand, the series reveled in having these characters wear skimpy, ridiculous outfits on a nearly constant basis.  The revealing costumes weren’t limited to the female characters, but the battle attire in Kill la Kill always seemed to be at odds with its other themes. 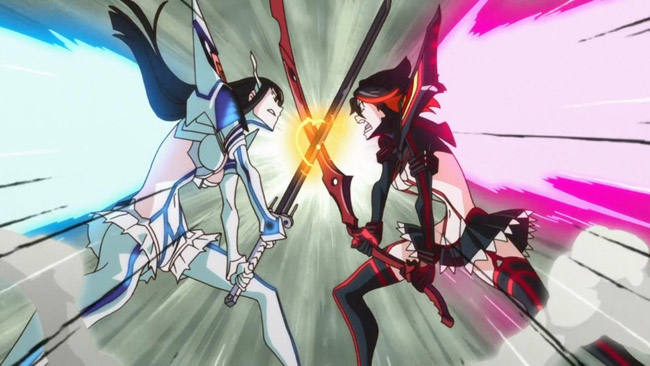 Eat your heart out, Madoka Magica.

Of course, by “always,” I mean “until the last episode.”  It wasn’t until the aftermath of the final battle that we saw the whole picture.  In the process of defeating Ragyo and the life fibers, the last of the heroines’ uniforms were destroyed.  In his final moments, Senketsu told Ryuko to replace him with new clothes.  His request was honored in the epilogue, which showed the show’s surviving characters wearing street clothes of their own choosing in a newly peaceful world.  This change punctuated an idea that slowly built up over the course of the series.  In order to fight their enemies, Kill la Kill’s female characters needed to put on revealing outfits.  We can interpret this as an analogy for the way in which women in anime action series are frequently used as “fan service” characters, their fighting abilities ignored in favor of skimpy clothing and sleazy camera angles.  From this perspective, Ryuko and Satsuki’s battle takes on a symbolic quality: their struggle is as much for the freedom to dress how they want as it is to save the world.  I’m not sure this lets Kill la Kill completely off the hook for its costume design, but it does elevate it a notch above less ambitious titles.

Looking back, Kill la Kill reminds me of other anime titles that proved to be smarter than they first appeared.  It stands on level ground with shows like Black Lagoon, Gurren Lagann, and Fate/Zero.  Each can be enjoyed on a surface level as a mix of impressive action and high drama, but there’s a more complex layer waiting for anyone willing to take a closer look.  Considering that I’ve watched each of these name-drop shows at least twice, I suspect Kill la Kill will soon be due for a second viewing.  It’s the kind of series that simply demands more attention than can be paid in a single sitting.