Welcome back to Channel Chaser, and the second part of my review of the long-running sci-fi franchise Stargate. Two weeks ago, we addressed the show that started it all, Stargate SG-1. Today, we’ll be moving on to the later spin-offs inspired by the success of SG-1, brining new cast members in the Stargate family and sometimes even crossing over between shows.

First, a little background information. Throughout seasons six and seven of Stargate SG-1, mention is made by various characters to a supposed “Lost City” of the Ancients–the race who built the Stargates and later evolved into energy beings–where there are powerful technologies and weapons capable of helping Earth battle the bad guys in the galaxy. As it turns out, however, the Lost City is no longer on Earth, but in a different galaxy altogether.

So begins the plot of Stargate Atlantis. Launched in 2004 as a counterpart to season eight of SG-1, Atlantis features an international team of scientists and military personnel who go on an expedition through the Stargate to the far-off Pegasus Galaxy in search of the Lost City, which is–you guessed it–Atlantis. Struggling to master the city’s controls and cut off from Earth due to the malfunctioning Stargate, the expedition is stranded and has to fight all new aliens in order to survive.

Originally intended as a continuation of SG-1 with the same old cast, Atlantis was redesigned as a spin-off with a new cast of characters who, while very similar in their group dynamics to SG-1, have very different personalities and ways of interacting with each other. These include the cool and confident Colonel John Sheppard, brilliant but arrogant scientist Rodney McKay, quirky medical man Dr. Carson Beckett, alien warrior Teyla, and the civilian head of the mission, Elizabeth Weir.

Some of these characters, such as McKay and Weir, as well as later additions like Richard Woolsey and Sam Carter, had already had roles on SG-1 and were as such reintroduced into the new story. Eventually, the cast also grew to include action movie star Jason Momoa as the enigmatic fighter Ronon Dex and Firefly veteran Jewel Staite as Dr. Jennifer Keller. The show also introduces new main villains the Wraith, a race of creatures who killed off the Ancients millennia ago and have the ability to suck the life out of people with their hands. Creepy. 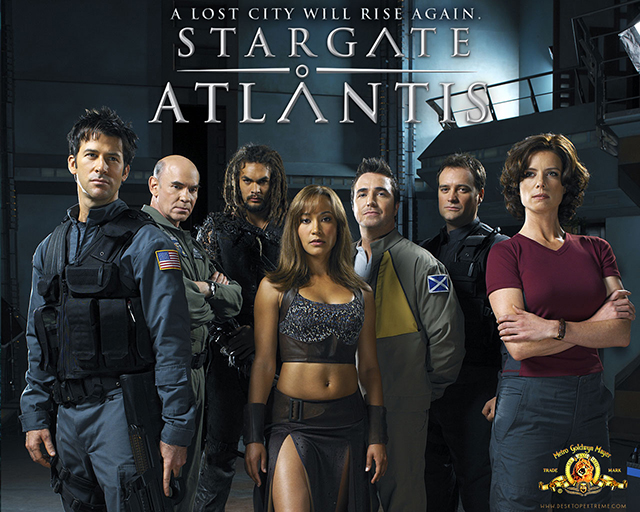 In many ways, I really, really, like Stargate Atlantis. The show is great–maybe even as good as SG-1–throughout its first, second, and third seasons. The rapport of the cast and the roles they play are just fantastic. The most entertaining part for me frequently was watching Sheppard and McKay butt heads in the classic military versus science debate. Sheppard often works to keep McKay’s runaway ego in check, but then uses it to his advantage when the situation requires it, putting immense pressure on the scientist so that he will perform miracles when the team needs it the most. The phrase “Oh, well I guess we’re going to die, then,” eventually becomes a sure sign that Rodney McKay is about to do something amazing.

While it does have many good attributes, however, Atlantis had a few problems that I feel really kept it from being as successful as it could have been. Firstly, there was an epic mishandling of many of the characters in the show’s writing. Several cast members like Beckett, Weir, and season one regular Aiden Ford were killed off for no adequately explained reason. I also felt that even though she is undeniably a great actress, the addition of Amanda Tapping to the cast in season four was a mistake. You have to let shows like this stand on their own, and I felt that took away from Atlantis’s appeal slightly by inviting too many unfair comparisons and shoving an old character in where she didn’t really belong. It was just poor planning.

Another thing is that the bad guys of Atlantis were never as interesting as those in SG-1. The Wraith were okay for a while, but the whole creepy, life-stealing shtick got old pretty fast. Also, because they felt like spicing things up in season three, the writers added SG-1 mainstays the Replicators to the bill. Give me a break. If I had enough of them through ten seasons of SG-1, what makes you think I’m going to sit around for more? Even more frustrating, the series’ only truly great villains–the Cold War-esque, double-crossing schemers the Gen’ii–were never developed to my satisfaction. I mean, they got like ten episodes in five seasons. Come on!

Anyway, I’ve complained enough about Atlantis. It’s time we moved on to the third and final installment in the franchise, Stargate Universe. The premise is pretty similar to SGA, actually: an rag-tag international group has to evacuate an off-world SGC base under attack using a previously untested nine-symbol Stargate address and end up stranded on board the Destiny, an Ancient starship traversing the galaxies in search of answers to the mysteries of life. 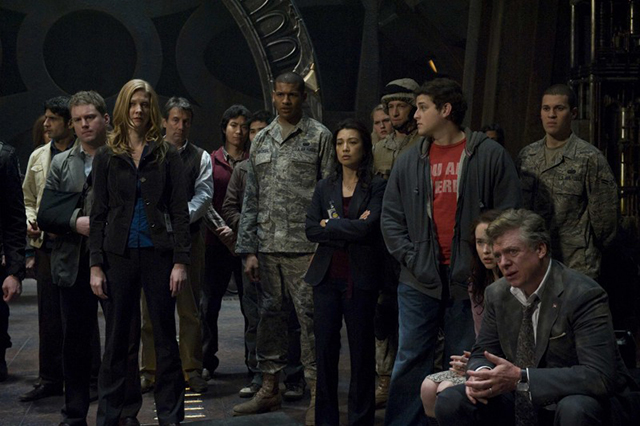 Compared to life on Destiny, the Atlantis expedition looks like a walk in the park. The ship is old, falling apart, and totally devoid of any useful supplies, forcing the unwilling, in-fighting group members to band together and jump through the Stargate on timed missions to find supplies and spare parts, at the risk of getting left behind when Destiny jumps again.

I don’t have much to say about Stargate Universe, but most of what I do have to say is not good. Honestly, the show doesn’t so much resemble anything Stargate­-related so much as a really bad rip-off of Battlestar Galactica. Gone is the trademark humor, sense of adventure, and colorful characters, instead replaced by a gang of cynical opportunists all vying to gain political control over the situation, as well as actual control over the runaway ship.

In the wake of BSG’s success, Syfy figured that if they could just make Stargate as gritty, dark, and serious as it was, they could make boatloads of money. Well, they were wrong. It’s like trying to fit a square peg into a seven-sided hole. SGU only lasted two seasons before it got dropped like it was hot–which, of course, it really wasn’t. The only character I actually was interested in following–being the ship’s leading Machiavelli-style scientist Dr. Nicholas Rush, portrayed by well-known actor Robert Carlyle­–was probably the worst of the bunch as far as being a good person was concerned. Other than him, nobody else in the cast is really worth watching. Even David Blue, who plays the ship’s resident nerd and audience stand-in Eli Wallace, comes across as pretty bland and boring.

Universe also totally lacks what I think every Stargate series needs, which is a recurring, dependable antagonist. SGU introduces several bad guy aliens during its run who, for various reasons, covet Destiny and its power, but all to varying degrees of no success whatsoever. SG-1’s space mafia the Lucien Alliance has a fairly big presence as they invade Destiny at the end of season one, and have apparently spent a lot of time conducting terrorist-style attacks against Earth, but this is never really elaborated upon and the Alliance’s strangely recast image from incompetent goofballs in SG-1 to bloodthirsty and dangerous saboteurs in SGU just doesn’t work.

Basically, if you liked Stargate SG-1, you’ll probably like Atlantis, too–at least, for the first couple of seasons. It kind of goes off the rails plot-wise later on and loses too many good characters for my liking, but overall it’s a fine follow-up to its parent show. Universe…not so much. Its just Stargate trying to be something it is inherently not, and doing a very poor job at it.

I’d like to say we can have higher hopes for the next series, but as of now, Stargate’s future is uncertain. With Universe pretty much killing the franchise and a movie-style reboot on the way, there’s no telling what could happen. Here’s to hoping it’s as awesome and fun as the original!