Welcome to another edition of Channel Chaser! Today I’d like to start things off with a question. Is it just me, or are the premises of new TV shows looking bleaker and bleaker every time I see a new trailer?

Let’s consider some of the latest new dramas and currently popular offerings available, for starters. Among many others, we see shows like TNT’s Falling Skies and The Last Ship, HBO’s The Leftovers, FX’s The Strain, the CW’s Supernatural, and much, much more. What do all these shows have in common, you may ask? Well, the thing that sticks out most to me is the relatively obvious thread of “it’s the end of the world!” 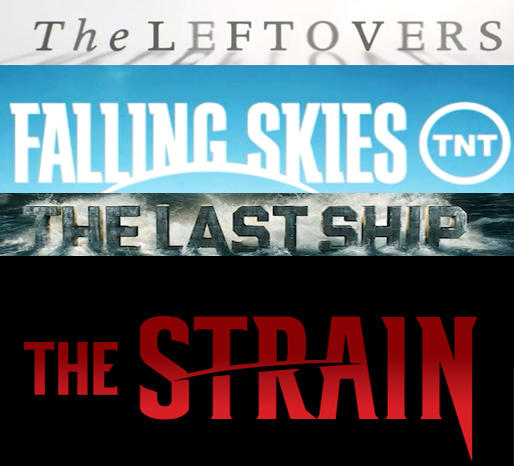 It seems to me that a lot of TV nowadays has become tied up in and fascinated by the imagination of apocalypse, and it baffles me how so many of us–myself included–can get entertainment, and indeed pleasure, out of witnessing the systematic destruction of human society most of these shows involve. What kind of psychological condition can explain something like this?

Well, as it turns out, it’s a pretty simple answer: basic human nature.

Now I’m not trying to be morbid or cynical and suggest that we only enjoy these kinds of tales of misfortune because it makes us feel better about ourselves: far from it. The issue is far more complicated than that. The point I’d really like to make is that apocalypse, as a genre, is one that is extremely successful for a variety of reasons, and on both sides of the TV screen.

Interestingly enough, the classical definition of an apocalyptic narrative is one that is conveyed from an otherworldly or higher power to a human recipient through the medium of a vision, dream, or some other kind of transitory state. The idea that apocalypse meant the literal “end of the world” only came about much later, and only a small portion of literature that could be classified as apocalyptic has this quality about it.

So if you really think about it, you could pretty fairly call almost any TV show an apocalypse, in the traditional sense, even if it wasn’t about the imminent collapse of order and society. A TV show is generally a story, or a vision if you will, that is conveyed from producers, directors, and writers through the medium of a box to a human recipient–a.k.a., the audience. Sorry to get so philosophical on you, but I hope you understand my fascination.

Anyway, to return to my original point, one of the primary reasons for the prevalence of apocalypse in our entertainment is that, from a writing standpoint, it’s always a lot easier to destroy then to create. In other words, it takes less effort to tear apart an already existing world than to totally create a new one from scratch as many more ambitious shows attempt to do. The scenario of apocalypse is also incredibly useful for catching the attention of a viewer. Usually, in an apocalyptic TV show, there are clear battle lines drawn early on in the story: the us–against–them mentality. Whether it be aliens, vampires, or something perhaps less personal, like a deadly disease, it is generally very easy to distinguish who is good and who, or what, is bad.

People like watching an apocalypse because it’s not confusing–at least, not in the traditional sense. They like knowing who their heroes are supposed to be and having a solid, recurring villain or two to identify against. You can throw in whatever kinds of plot twists that you like, but in the end, an apocalyptic narrative is a battle between the forces of light and darkness.

It’s true that some shows do a much better job than others of making this somewhat bland dynamic interesting. I like to single out Supernatural for special praise in this regard because of its relatively equal treatment of demons, a force obviously on the side of evil, and angels, the stereotypical “good guys” who are shown to be every bit as fallible and morally ambiguous as their dark counterparts. Even the human characters are constantly tested and turned one way and the other until it’s not really clear who’s on the right side.

Apocalypses are about sorting and order; the separation of things that are different and placement into much more comfortably homogeneous categories. They make us feel good because they offer an escape: one not just from reality into TV fiction, but from a world where things more often than not aren’t in their proper place and don’t make sense when we want them to.

As the renegade bandit John Pope from Falling Skies could testify, the end of the world also offers a tantalizing chance at total freedom that most people will rarely ever get to experience. Certainly the collapse of civilization doesn’t seem to be something that could be in any way positive, but the idea of no longer being bound by systems and rules we don’t agree with fascinates us as viewers. What would we do if we were put in the shoes of these characters? How would we react to the situations they are thrust into on our behalf?

I know a lot of people think that apocalypse stories are old hat at this point, and I’m not going to necessarily disagree with that assessment. My point is just that apocalyptic storytelling exists, and enjoys widespread success, for a very good reason: it draws in audiences, it’s easy to create and continue spin stories around, and it makes big money. So don’t expect it to be going away anytime soon.