I’d like to start this article off with a momentary diversion from television into movie-land, as well as a bit of personal confession. Does anyone else remember a movie from a few years ago called Get Smart?

It’s okay; I don’t really remember it, either.

When I heard that this rather weak and forgettable movie was based on the plot of a television show from years ago, I was at first pretty skeptical. Fortunately, I’m glad I took the chance to find out, or I would have missed out on a true gem of entertainment. 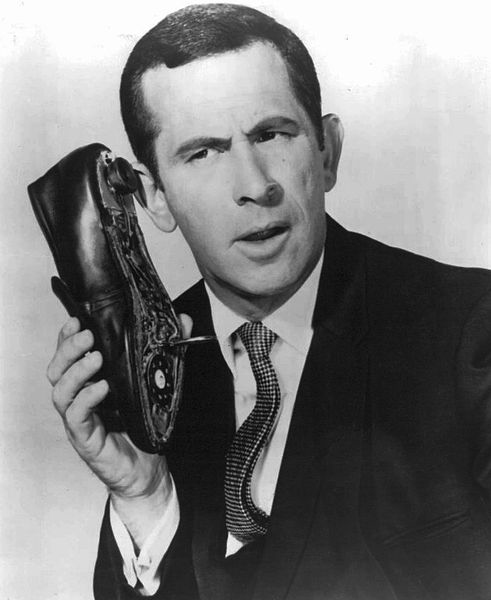 The series Get Smart was part of the comedy boom in the mid-1960s, created by writer and producer Buck Henry and veteran comedian Mel Brooks. The premise is ostensibly a spoof of every serious spy thriller made up until that point; a secret battle between agents of two organizations, CONTROL (the good guys) and KAOS (the bad guys). Maxwell Smart, otherwise known as Agent 86, is a CONTROL spy who travels the world to foil KAOS plots along with his female counterpart, Agent 99, and with support from the Chief, head of the CONTROL organization.

In a parody of James Bond’s propensity to use complicated gadgets concealed as everyday objects, Smart and his fellow agents use various devices along similar lines, but ludicrously exaggerated for comic effect or just altogether useless: these include, but are not limited to, the Inflato-Coat, which produces a fake pair of arms to elude handcuffing; the Cone of Silence, meant to keep conversations private but that only succeeds in preventing users from understanding each other; and the Smart’s trademark shoe-phone, with a false sole concealing an old-fashioned rotary telephone meant for contacting headquarters. The conflicting nature of the gadgets often leads to humorous consequences; in one scene, Smart uses eight different pieces of apparel rigged as telephones, including his belt, his tie, his wallet, and his shoe to speak to several other agents at once, practically undressing on a public park bench while still trying to act casual for passers-by.

In another example of spy-genre spin, the agents of CONTROL and KAOS, despite being on opposing sides of a global conflict, are shown to be surprisingly familiar with each other, and in some cases even friendly. In one episode, Smart apprehends a beautiful female KAOS agent just as the Chief arrives on the scene, and both recognize each other from their earlier meetings as agents, beginning a long and personal conversation and seeming genuinely interested in each other’s well-being. As Smart dryly observes, “That’s the wonderful thing about the espionage business; you make friends that last a lifetime.” Other insertions of humor come from CONTROL agents going undercover in bizarre and uncomfortable spaces, including inside restaurant food carts, grandfather clocks, and upside-down in string bass cases, as well as jabs at government bureaucracy and incompetence; in one instance, Max even uses information from captured KAOS agents about how much paid vacation time they get as leverage in CONTROL’s own union negotiations.

An even greater attraction to the series is its unique approach to the characters involved. In the film adaptation, Carell’s Smart often falls flat due to his field incompetence stemming from his desk job as an analyst, and his sappy crush on Hathaway’s 99 who is clearly his superior in every way; this makes for a character who is more often pathetic than actually funny. In the original series, however, Smart is portrayed as a capable spy who has mastered combat arts and often provides helpful solutions to problems. The humor comes from his arrogance, clumsiness and generally painful naivety: for example, being confused about the use of a suicide pill because he can’t figure out how to get his enemies to take it. Smart is shown as a boob who frequently overestimates his own capabilities and often succeeds in his missions completely by accident and in spite of himself.

Get Smart is also notable due to the pervasiveness of its catchphrases in contemporary culture. Over the course of the series, Smart utters many phrases that carried his fame into perpetuity; these include “Sorry about that, Chief,” “Would you believe…?”, “The old ____ in the ____ trick; that’s the (#) time this month,” and of course, the ever-popular, “Missed it by that much.”

The series is not without its failings, however; despite the fact that much of the humor can still make viewers chuckle even after more than 50 years, parts of the show can be extremely dated and off-putting for viewers; this ranges from the relatively token involvement of women in the show (as Barbara Feldon’s Agent 99 has her moments, but is overall just meant to be a pretty face) to its uncomfortable treatment of minorities, specifically Asian people and Native Americans. Additionally, the series can be repetitive in its use of humor, as over five seasons the recycling of jokes in new situations can become a bit tedious.

Overall, despite being dated in many respects, Get Smart continues to entertain even in a changed modern-day world. And that’s definitely something you should believe.