Welcome back to Channel Chaser! If anyone’s been paying attention to the world of television recently, you’ll know that there’s some pretty big stuff coming out in terms of casting for a couple of well-known networks and shows. Both of these items have me very, very excited for a lot of different reasons, so I’ll just go ahead and get right into them.

If you may recall, a couple of weeks ago I did a piece about speculation on who was going to step up to run Comedy Central’s The Daily Show once long-time host Jon Stewart had gone. Stewart announced earlier this year that he would be leaving the show after nearly 16 years at the helm, both on camera and behind the scenes, and there were a ton of theories flying around as to who would replace him: from long-time correspondents like Jessica Williams or Jason Jones to complete outsiders such as Tina Fey and Amy Poehler.

But I’m pleased to announce, if you haven’t heard already, that the guessing game is over. Comedy Central announced on Monday, at the beginning of a mid-season hiatus for The Daily Show, that new contributor Trevor Noah was tapped to fill the show’s starring role. 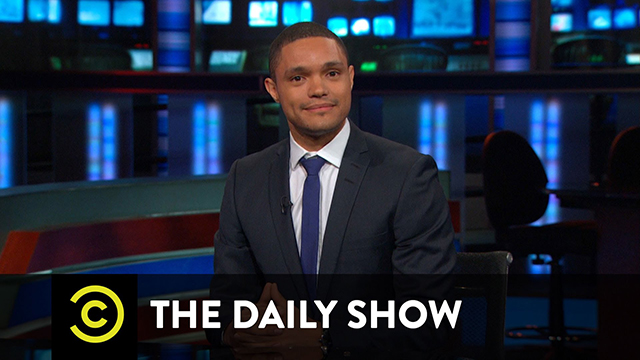 At first, I honestly wasn’t sure how I felt about this move. In terms of potential candidates for taking over the hosting job on The Daily Show, Noah had never even crossed my mind. Sure, he’s been on the show a few times, and sure, he was pretty funny when he was. But he never struck me as true star material. Little did I know that apparently, in his home nation of South Africa, Noah already has quite a reputation as a comedian, and he’s been extending that presence to the United States as well.

Once I recognized that Noah had the chops to do the job, I started to realize what a potentially great move this was by Comedy Central. Not only will they attract so many new fans to The Daily Show based on Noah’s already existing stardom, but they’re following the clearly successful model of getting a foreign-born person to commentate on U.S. affairs for a perspective-shifting kind of humor. I say clearly successful because there’s already a model for that, established by another former Daily Show contributor: HBO’s wildly popular Last Week Tonight with Englishman John Oliver. If Comedy Central can capitalize on this idea, they could have yet another hit on their hands.

Of course, the decision hasn’t come without controversy. Immediately after the announcement, Noah’s background was subjected to the full scrutiny of the Internet community, and what came out of it wasn’t all good. Noah has come under fire in recent days for certain comments he posted on his Twitter account over the years that some see as insensitive and demeaning toward women and minorities. I won’t bother re-posting them here: enough of that has been done already. If you’re really interested, go to pretty much any major news site.

My take on this whole thing is that it will eventually go away. Everyone’s got a few skeletons in the closet, a few things that maybe they shouldn’t have said, and some stuff that social media doesn’t manage to keep under wraps: I know I’ve made mistakes like this myself many times. Obviously it’s not great that Noah may have posted some questionable jokes (which, in truth, really don’t come across as that funny), but I take them as just tasteless rather than out-and-out offensive. Comedians these days are so often dancing the fine line between humor and insult that things like this are bound to happen. They happened to Stephen Colbert and Jon Stewart, too. In any case, Comedy Central is standing firmly behind Noah, and for the time being, so will I. Unless he’s not a good host, of course. In that case, we never had this conversation.

In other casting news, we’ve gotten another exciting update in the CW’s upcoming Flash/Arrow spin-off: Arthur Darvill, of Doctor Who fame, will be joining the main cast. For those of you who aren’t familiar, Darvill is a British actor who spent two and half years by the side of the Eleventh Doctor (Matt Smith) and fellow companion/wife Amy Pond as they journeyed through time and space in some of the show’s most unforgettable adventures.

And this addition is even bigger than that: not only are we getting a guy who’s a pretty big deal already, but the role he’ll be playing is even bigger. Darvill has been cast as Rip Hunter, the Time Master himself–a character from DC Comic lore I think it’s safe to say that nobody really thought would show up on the CW. But I suppose I shouldn’t be too surprised: since Barry Allen and Harrison Wells have been messing around with time a lot recently in The Flash, perhaps the reason Rip shows up at all is to try and fix the damage they could be doing, in keeping with his comic-book role as the guardian of history.

The most interesting part about this, aside from some outlets saying that Hunter will be the central character of the spin-off, is what it means for the future of the CW universe. Firstly, Rip Hunter has been both a hero and a villain in comic books, and portrayed in many different ways over the years. The casting call for this role describes him as a “Han Solo-type rogue” with a swagger and sarcastic attitude, a far cry from the uber-serious character Hunter usually takes in source literature. But I have confidence that Darvill can handle the part in spite of the vast difference between this role and the bumbling yet sincere Rory Williams: having seen him in many other roles besides on Doctor Who, including some pretty heavy stuff like Broadchurch and live stage shows, I can definitely say he’s got the chops for this part.

Also, there’s the implication that one time-traveler’s arrival could be just the beginning here. Who’s to say that Hunter’s friends and fellow time-traveling heroes the Blue Beetle and Booster Gold, as well as Atom enemy Chronos, won’t be joining the party? Many people were upset when it was announced that it would be Hunter and not Booster in the show, but I don’t think an appearance by Gold should be written off just yet. Then again, the writers do seem to be giving Hunter a lot of the characteristics that Booster was known to have, sort of like combining the two people into one…but who knows? All I can say for now is that a show with Firestorm, Atom, Hawkgirl, Captain Cold, Heat Wave, and Hunter sounds pretty darn cool.