I bought half a dozen volumes of manga from Right Stuf a little while ago. Some were on sale, while others had simply been sitting on my “buy this eventually” list for far too long. The box arrived over the weekend, and something occurred to me as I stared at the pile of books: my taste in manga is more than a little eclectic. So, for my amusement and yours, here’s a look at this rogue’s gallery of graphic novels. 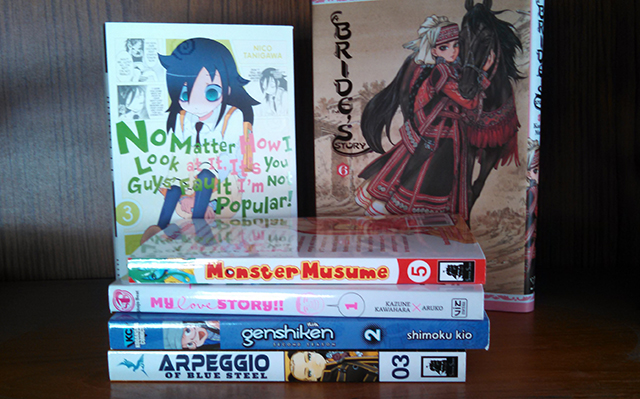 My inner mecha nerd is steering the ship on this one. I like to think of Arpeggio as the indie hipster version of Kantai Collection: it had ship girls before ship girls were cool, but you’ve probably never heard of it. I talked about this series a few times back in the Kawaii Overthink days, and most of those impressions still stand. Gorgeous naval battles, an interesting group of characters, and some intriguing sci-fi are Arpeggio’s biggest selling points. The manga really starts to break away from its anime adaptation’s storyline in the third volume, by which I mean it gets better and more interesting.

If I ever find myself on a one-way trip to Mars, I’m bringing A Bride’s Story. Not only does it hold up over multiple readings, it makes me want to slow down and linger over each page. While Arpeggio of Blue Steel pours loving detail into its battleships, A Bride’s Story applies that same level of artistry to absolutely everything. Whether it’s a building, an animal, or a character’s outfit, Kaoru Mori spends what I assume is an incredible amount of time on everything she draws. That’s impressive in any genre, but it makes a huge difference in historical fiction. The world of the series has an immersive quality that you don’t see very often. Simply staggering.

The latest iteration of Genshiken isn’t really written for me. My own brand of otaku-ness is best captured by the original cast of geek guys. The newer chapters reflect a different segment of anime fandom, but it’s a testament to the quality of this long-running series that I still enjoy reading it. The sense of nerdy camaraderie is still alive and well, and it’s fascinating to see how some of the old characters interact with the new ones. I’ll always have a soft spot for veteran otaku Madarame, perhaps because we’re both college grads who still keep in touch with our old clubs.

I make no excuses for this one. MonMusu is a raunchy fanservice comedy featuring an ever-expanding harem of centaurs, harpies, and other monster girls, and I freely admit to enjoying it. Maybe it’s the constant barrage of delightfully cheesy puns. Maybe it’s the series’ habit of poking fun at its own absurdity, not to mention its willingness to crack jokes about its fanbase. Maybe it’s the surprisingly articulate theme of embracing diversity, but it’s probably just the shameless sex appeal. Whatever it is, Monster Musume is the rare fanservice series that I actually like.

And now for something completely different. We go from the self-indulgent boob-fest that is Monster Musume to the sweet, charming, and extremely funny shoujo comedy that is My Love Story!!. The hook here is that the protagonist is a total guy’s guy: tough, dependable, and built like a tank, but entirely too terrifying to have any luck when it comes to romance. When a girl from another high school starts spending time with him, he assumes she’s got a crush on his pretty-boy best friend. Of course, that’s not the case at all, and plenty of adorably awkward moments ensue. Whether you’re a macho man, a girly girl, or somewhere in between, this one looks like it’s capable of pulling on your heartstrings while making you laugh your posterior off.

After that brief interlude of “Paul’s really a nice guy,” we’re right back to “Paul’s a terrible human being.” The series formerly known as Watamote is the reigning king (er, queen) of cringe-inducing, mean-spirited humor at the expense of its painfully antisocial heroine. There are probably folks out there who can’t stand the way Watamote revels in dumping steaming piles of misery on poor Tomoko, and they probably have a point. Even so, there’s something about it that captures the essence of that people-hating teenage angst we’ve all felt at some point. Even as we’re encouraged to point and laugh, we’re also pushed to find the part of ourselves that Tomoko embodies. It’s brilliant, evil, and just a little bit sentimental. I love it. Lord only knows what these half-dozen books say about me, but there you have it.