In the US, manga bestseller lists are typically the exclusive territory of major franchises like Attack on Titan and Naruto.  A new volume from a less popular series is a big success if it makes the top ten for a week or two before the heavy hitters reclaim their spots.  A niche title is hardly expected to make the list at all, let alone hold down a top spot for multiple weeks like the first two volumes of Monster Musume have done.  It seems like publisher Seven Seas has a surprise hit on its hands, but how is a harem comedy featuring half-human mythical monsters managing to punch so far above its weight?

Lamias and harpies and centaurs, oh my.

It’s not incredibly difficult to understand Monster Musume’s initial popularity.  Even today, novelty is a key part of manga’s appeal in the US.  A reader who buys a Japanese graphic novel over more conventional domestic offerings is frequently looking for “something different,” but manga isn’t immune to getting stuck in a rut.  A series that shamelessly jumps the proverbial shark will naturally attract attention simply by shouting louder than the competition.  Monster Musume accomplishes this by taking the time-tested harem comedy setup and swapping out the usual female cast for centaurs, harpies, and other mythical beings.  This extra level of absurdity makes it strange enough to garner both attention and impulse buys as readers find themselves too intrigued to say no.

What this explanation fails to account for is the success of the second volume in the series.  Weirdness can sell one book, but subsequent releases will only fly off the shelves if the content is good enough to turn curious readers into fans.  The cover art on the front and sales pitch on the back made volume one a success, but it’s the pages in between that sold volume two. 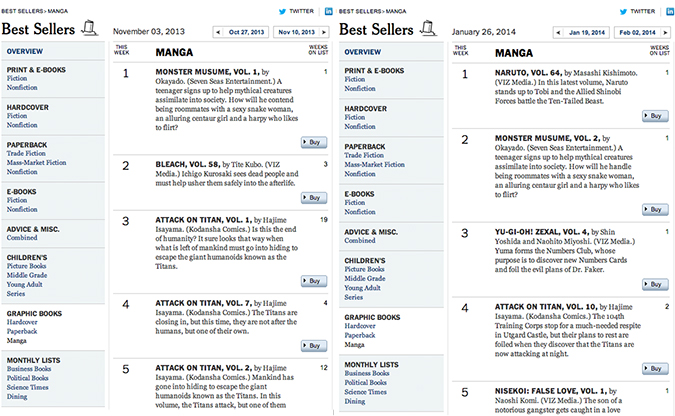 New York Times bestseller lists from the premiere weeks for volumes one and two. Both remained in the top ten for at least four weeks.

To address the elephant in the room, Monster Musume does indeed rely heavily on sex appeal.  The series’ female cast members appear explicitly topless on a regular basis (as in EVERY SINGLE CHAPTER OF VOLUME ONE), and aren’t exactly modestly dressed the rest of the time.  All the expected boob jokes are made at one point or another, and the series seems to revel in its own raunchiness.  As easy as it may be to write off a series so focused on fan service, the truth is that it sells books just as well as anything else.

Coupled with this dedication for snake-girl cleavage is a self-deprecating sense of humor.  Monster Musume is well aware of its own absurdity, and is at its best when it mocks itself.  Puns on the characters’ animal natures abound (“hold your horses,” “for the birds,” etc.).  The usual selection of awkward situations and character humor is present and accounted for, but it’s the series’ willingness to call attention to its quirks that most frequently hits the mark.

Hidden beneath all this sound and fury is a surprisingly coherent theme of embracing diversity.  Anyone who judges the mythical characters in Monster Musume based on appearance is portrayed as an obnoxious buffoon in need of a swift blow to the head.  The series’ human protagonist has a nice speech at the end of volume one about how the monster girls shouldn’t feel compelled to change their personalities in order to fit in.  Sure, it’s the kind of corny lesson you’d expect from a Saturday morning cartoon, but it says something about the series’ perspective.  Behind the tails, hooves, and wings are real characters that aren’t just there to be gawked at for their strangeness.  It may look like a circus sideshow, but Monster Musume isn’t without a heart.

Even if, like me, you aren’t quite in love with Monster Musume, there’s still reason to celebrate its sales success.  It’s easy enough for American companies to be overly cautious with their manga licenses and ignore quirky gems in favor of guaranteed sellers.  Seven Seas took a chance with this title, and a positive outcome will be a point in favor of taking other risks down the road.  After all, what manga fan doesn’t enjoy seeing something new and original hit the shelves in the US?

Monster Musume is available from Right Stuf and Amazon