Something interesting happened while I was watching the last few episodes of Kill la Kill: I found myself cheering on the villains.  As Satsuki and the Elite Four launched their assault on the neighboring schools, I was eager to see them bring down the proverbial hammer on their opponents.  At first glance, this shouldn’t make any sense.  Having spent a dozen episodes watching our charismatic heroine Ryuko take on this oppressive student council, how in the world did I end up wanting to see them win a battle? 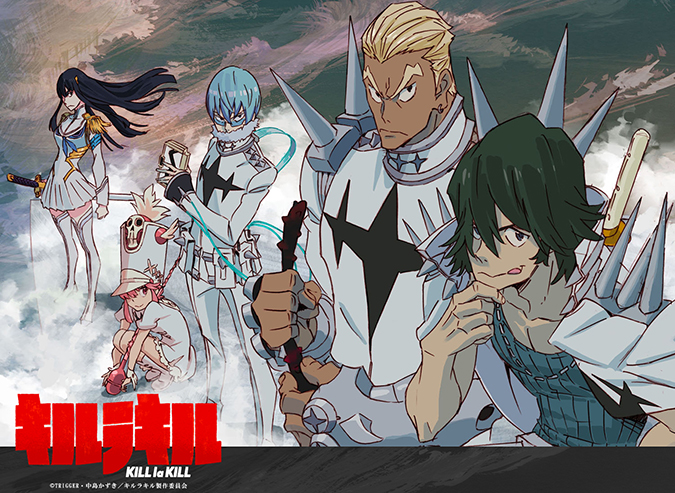 I suspect that this odd turn of events was due in part to Ryuko’s conspicuous absence from the action in the aftermath of episode 13.  With the show’s lone heroine busy recovering from her recent defeats and gathering the scattered pieces of her uniform, Kill la Kill left its audience in a fascinating predicament.  As the Elite Four squared off against the schools from Kobe, Kyoto, and Osaka, we were forced to choose between the villains we knew and their comically over-the-top opponents.  The antagonists briefly became the heroes by default.  Once Ryuko was back in the fight, things returned to their usual state.

Still, the protagonist’s absence alone shouldn’t cause the audience to cheer on her enemies.  The roots of this temporary insanity go far back into Kill la Kill’s earlier episodes.  Each time Ryuko has fought with Satsuki or one of her lieutenants, the show has taken the time to fill in a bit of the student council’s backstory.  Over the course of the first dozen episodes, we’ve come to understand why each member of the Elite Four is loyal to Satsuki.  We’ve also been given hints that Satsuki herself isn’t on good terms with her powerful family.  Compared to what the series has revealed about the Kiryuin business empire, the members of the Honnouji student council seem downright honorable.

Kill la Kill has also gone out of its way to humanize the Elite Four.  We’ve seen it with Sanageyama’s loss to Ryuko in episode 6, where he was forced to confront and rise above his shortcomings.  It happened again during the King of the Hill battle, as each defeated member of the Elite Four sat down on the sidelines as if they were regular students.  Seeing a character suffer defeat only to come back stronger will almost always make the audience like that person more, regardless of his or her role in the overall story.  They may have started out as an inscrutable group of bad guys, but the members of the student council have slowly established a grudging mutual respect with Ryuko.  In doing so, they’ve also managed to change the way we as the audience view them.  We still want to see Ryuko beat them in a suitably epic fashion, but that doesn’t mean we can’t find them entertaining, charismatic, or even likable.