The last time we talked in-depth about manga publisher Seven Seas on this website, the topic was their surprise hit Monster Musume. The quirky supernatural harem comedy has continued to be a sales success, with volume three matching its predecessors in terms of taking up long-term residence on the bestseller lists. In my previous article on the subject, I suggested that this snake-tailed, bird-winged underdog might help to encourage the acquisition of other quirky licenses. Well, it’s time for me to say “I told you so” with a smug grin on my face. Behold! 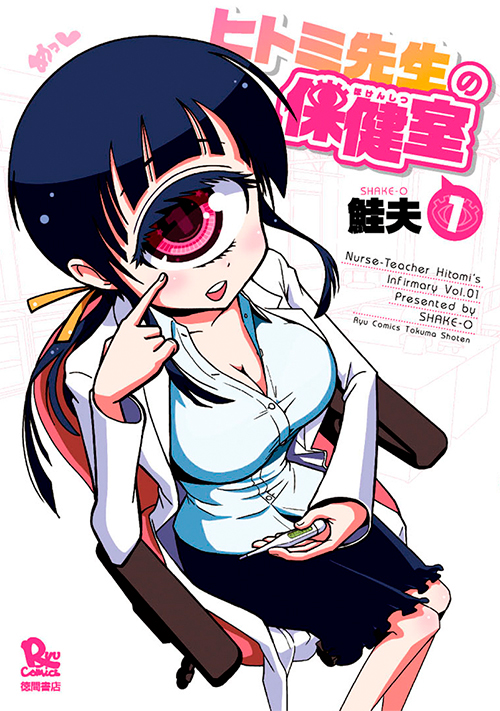 Eye see what you did there.

That’s the Japanese cover of volume one of Nurse Hitomi’s Monster Infirmary, and Seven Seas recently announced that they’ll be bringing the series to the US in early 2015. Along with Monster Musume and A Centaur’s Life, that makes three titles featuring supernatural “monster” characters. You could try to argue that Musume’s sales success and Centaur’s critical acclaim didn’t play a role in Hitomi being licensed, but doing so would be… monstrously difficult. (I couldn’t resist.)

This is an interesting case because it adds a sense of truth to a common refrain amongst US manga and anime companies: if a series does well, they’ll look for more like it. It’s a pattern that’s occasionally questioned by disgruntled fans (“Title A sold well, so why did no one license Title B?”), but if you ever wanted a concrete positive example, Nurse Hitomi’s Monster Infirmary is it. 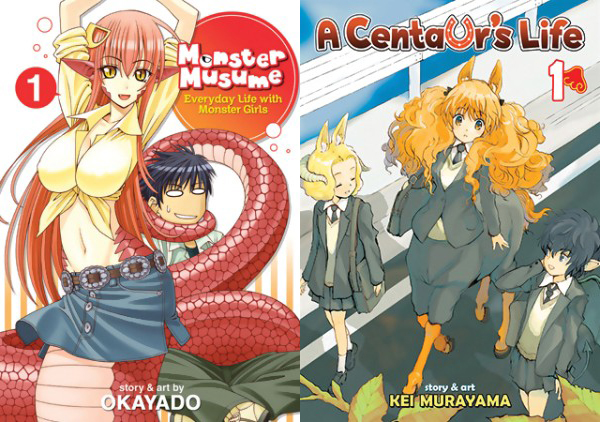 If only these had been released back when I took a mythology course in college.

Honestly, I’m glad this little niche is doing so well. There’s a very worthwhile theme that comes up throughout Monster Musume and A Centaur’s Life, and I hope it shows up in Nurse Hitomi as well. As the menagerie of monster girls and guys go through well-executed harem comedy and slice of life storylines, the reader begins to pay less and less attention to how they look. We never forget that they have four legs or fish tails, but the “weird” factor ends up taking a back seat to plot advancement and character dynamics. That shift from novelty to normalcy makes a serious point: no matter how strange or different a person may seem, they probably have the same goals and concerns as the rest of us. If it takes a busty snake girl or a bird-brained harpy to drive that lesson home, then so be it.

That about wraps it up for my analysis this week, so I’ve decided to use the rest of this space to conduct a little experiment. As I mentioned before, my past prediction that Monster Musume’s success would lead to more unusual titles being licensed ended up being correct. So here’s the question: did I just make a lucky guess, or do my manga industry predictions have the power to shape the future? Time to ignore everything I learned from superhero comics and use my powers for personal gain.

As I’ve mentioned in previous articles, I really enjoy Soredemo Machi wa Mawatteiru, which is available digitally through Crunchyroll’s manga service. The thing is, I’d really like to see an English print release of this delightfully bizarre series. Now for the experiment: I hereby predict that SoreMachi will see a print release in the US by the end of 2015. In hardcover format. Including the original’s colored pages and the author’s afterword notes. And free pizza somehow. Now all I have to do is sit back and see if my prediction will alter future events. Your move, Seven Seas.