Welcome back to Channel Chaser! So once again it’s time for a retro TV review, and this week I’ll be taking you on a jaunt into the far future with the FOX cartoon Futurama, a show that is very near and dear to my heart. 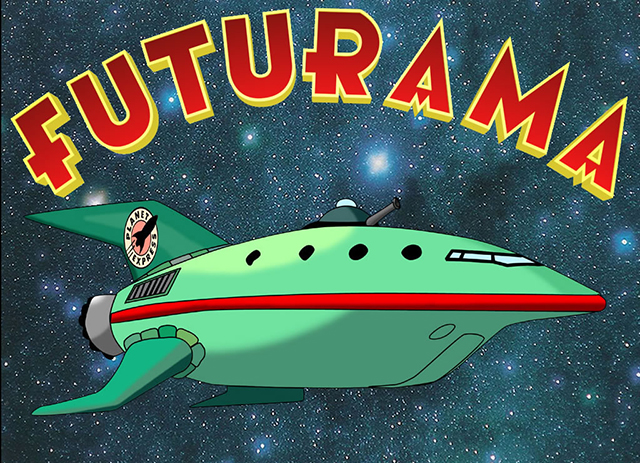 Futurama began innocently enough in 1999 as a companion project to the hit primetime series The Simpsons. With the success of the famous animated family, the FOX network began to look for another show that would appeal to the same audience and turned to series creator Matt Groening for answers. Together with Simpsons writer David X. Cohen, Groening decided that he wanted to base the new show firmly in the genre of science fiction–a far cry from the small-town world of Springfield.

What they came up with was Futurama, the story of a New York pizza delivery boy named Phillip J. Fry–an obvious shout-out to Marty McFly of Back to the Future fame–who is accidentally frozen in a cryogenics lab on New Years Eve of 2000. Awakening nearly 1,000 years later in the high-tech, futuristic city of New New York, Fry doesn’t have much time to dwell on the fact that he’s just lost everyone and everything he knows as he gets swept up in a whole new world of robots, aliens, and rampant societal problems. 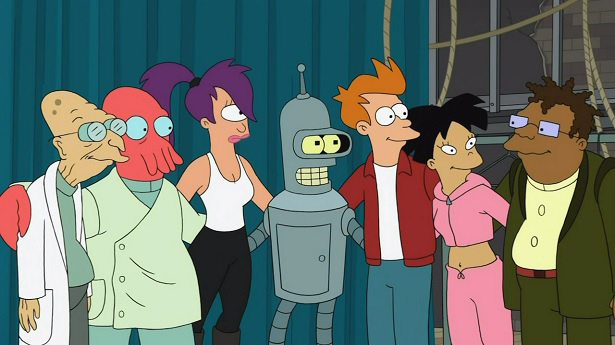 One of the great things about Futurama is that it brings real, coherent satire to the table on a fairly consistent basis, using both the characters and the future world at large to talk about issues that aren’t so far removed from our modern-day society. Despite the stereotype of the idyllic, utopian future society, New New York is very much like the city of today, except that the problems are massively and ludicrously exaggerated–from the class struggles of mutants in the sewer system, to discrimination based on alien race, and even the persistent pest of global warming.

Politics in general come under the most fire, as the sitting President of Earth in the year 3000 is none other than Richard Nixon, preserved as a disembodied head for centuries and still mad with power. Many other historical figures, from George Washington to George Takei, are also present in the show as literal “talking heads”, giving the audience a needed link to real life and allowing for even more comic crossovers. No contemporary debate is safe from criticism, although it should be noted that Futurama is considerably less edgy in its commentary than the acidic, politically incorrect wit that has come to dominate the current TV scene through shows like Archer and South Park.

As a fan of all things science fiction, Futurama also appeals to my inner geek by tackling genre tropes in a new and refreshing way. Several side characters are clearly meant to be vehicles for classic sci-fi spoofs: these include Captain Zapp Brannigan and Lieutenant Kif Kroker, two officers of the Democratic Order of Planets (DOOP) who pull a hilarious kind of Kirk/Spock routine; and Mom, the head of a massive robot-manufacturing company who in public plays a sweet old lady, but behind the scenes is a ruthless, dictatorial figure that mirrors many fictional corporate tyrants. Even the timeless debate over Heaven and Hell gets pulled into the mix with a “Robot Hell” (located in New Jersey, apparently) run by the sarcastic and scheming Robot Devil. In fact, I would go so far as to say that these minor recurring roles go a long way to making the show as entertaining as it is.

One of the most surprising things about Futurama, however, is that it actually has a lot of heart for a show that is more or less a glorified cartoon. These moments of sentimentality are mostly clustered around the romance between Fry and Leela, which seesaws back and forth like crazy throughout the series’ run. While Fry in general can be dim-witted and tactless, there are many times when I was genuinely moved by his demonstrations of emotion, such as losing his favorite dog and reorganizing the stars in the sky to declare his love for Leela.

Unfortunately, Futurama’s spot on TV was never really solid. FOX had a lot of gripes about the production of the show throughout its run on the network, often changed airtimes without notice, and ended up dumping it after only four seasons. Fortunately, Comedy Central picked it up and allowed it to stay on for another three seasons before finally cancelling it in 2013. There was also an additional season during the hiatus between channels in the form of four short movies featuring all the original characters, but the less said about them, the better. Let’s just say that there’s a reason shows like this only run for half an hour. The plots generally meander, derail, and become unavoidably silly and pointless when the writers try to stretch a 30-minute cover over a 90-minute hole.

While it is true that The Simpsons pretty much set the bar for mainstream animated shows, Futurama follows in its footsteps very well indeed. Its humor may be a bit too self-referential and genre-specific for viewers who are not well versed in sci-fi literature, but consistently funny characters, a sound moral footing, and a great sense of adventure make it a trip that you really shouldn’t miss. Here’s to hoping that we may yet see the return of the Planet Express crew someday…but in what form? Who knows?