Welcome back to this week’s edition of Channel Chaser! So maybe it’s just me, but I think that so far I’ve been pretty charitable in my reviews of TV shows, and I’ve tried to point my readers toward shows I think they might enjoy. Well, it’s time to change that. This week, I’ll be talking about a program that you should probably avoid, but that happens to be a guilty pleasure of mine. Okay, a very, very guilty pleasure. Let’s talk about Steven Spielberg’s epic alien apocalypse, TNT’s Falling Skies. 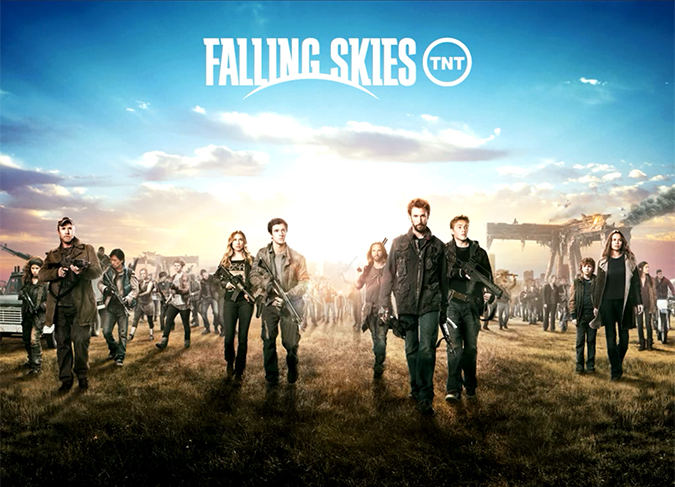 Depending on whether you watch it or not, I’m sure many of you are probably wondering in varying degrees, “What’s wrong with Falling Skies?” A fair question, and I’m here to tell you that there’s plenty to talk about. First of all, the historical metaphors: Falling Skies is, for all intents and purposes, a modern-day retelling of the American Revolution–well, plus alien invaders and big freakin’ space guns. And the show seems to get a little too excited in shoving the symbolism down the viewer’s throat.

The main character of the show, Tom Mason, is a history professor-turned-freedom fighter in the post-invasion world specializing in–guess what–the American Revolution. The alien bad guys, casted in the role of the British oppressors, are frequently trying to crush the human rebels of the “2nd Massachusetts” regiment, another obvious effort to draw the historical parallel.

The unfortunate truth is that the Revolutionary metaphor isn’t even that strong to begin with; after all, fighting a controlling foreign power was only one small part of why the Revolutionary War took place. The producers of the show conveniently overlook the need to establish more support for this overarching theme other than “We’re the Resistance, and we’re the good guys.”

I’m actually kind of annoyed by the flagrantly patriotic and preachy tone the show takes sometimes when the characters talk about the need to fight back, and Falling Skies seems almost intentionally to avoid any outside influence on the story–meaning, from countries other than the U.S. You would think that in three seasons of a story that saw aliens invading the entire Earth, someone would have at least once mentioned another world nation, but if you did, you’d be wrong. Maybe this will change in the upcoming fourth season, but I’m not hopeful.

The show also commits the unforgivable sin of casting great actors in mediocre roles. Noah Wyle, the show’s star and by all accounts a capable actor, is probably the only exception to this rule; his character, Tom Mason, is probably the only truly dynamic person in the show and the only one I can really find it in myself to care about. He has a very believable arc from his first introduction as a mild-mannered academic used to sitting on the sidelines to a battle-hardened and cynical leader who sometimes lets his emotions get too much control over him.

The other characters I’m a lot less crazy about. Veteran star Terry O’Quinn gets introduced at the end of season two as Arthur Manchester, the power-hungry and paranoid president of the New United States with close personal ties to Tom, but his role is relegated to about three episodes when it could and should have been developed for at least a season or so. Moon Bloodgood, who plays Tom’s love interest Dr. Anne Glass, is pretty one-dimensional and bland, as are Tom’s band of kids.

Familiar TV face Colin Cunningham should be interesting as John Pope–a former convict and anarchist who serves as Tom’s personal nemesis–but his character frustratingly rejects multiple chances to prove he has even an ounce of decency. Maybe this is on purpose, but regardless, it really ticks me off. Even Karen Nadler, who was transformed into a mediator for the alien overlords in an attempt to put a human face on the invaders, is an incredibly cheesy villain who might as well twirl a mustache, shake a fist and yell, “I’ll get you next time, Tom Mason!” What is this, the 1950s?

Finally, the truth is that while Falling Skies tries to be edgy and suspenseful, the so-called “plot twists” are generic sci-fi fare that seasoned viewers can see coming from a mile away. Who knew that the Skitters were humans transformed by the Harnesses? Actually, I did. The Volm betraying their would-be human allies? Saw that coming. Weird baby with alien DNA? Totally called it. You get the idea.

The one positive thing I can say about Falling Skies is the great special effects. Then again, it’s a Spielberg series with a huge budget, so it had better at least have that. Although I seem to recall another big money series that was hailed for its revolutionary visuals–anyone else remember Fox’s dinosaur blockbuster Terra Nova? Oh, right; that was a terrible show, too. Oops.

The logic behind Falling Skies seems to be that if you wow the audience with CGI, they’ll manage to forget that fact that the story is about as dry as the Sahara Desert. I really, really want to like this show more than I do, but I just can’t. The wooden acting, predictable plotlines and problematic symbolism all combine to make a program that’s trying way too hard to be a hit to be good. That being said, I will almost certainly keep watching Falling Skies just because I want to see what they do with the sci-fi elements. One can only hope that maybe they’ll find it in their massive budget to hire a real writer at some point.