Welcome back once again to Channel Chaser! I’m always on the lookout for a good comedy show, especially one where the characters involved are developed as well as in your typical drama. Unfortunately, this kind of quality is usually hard to come by nowadays because comedies tend to focus on the humor at the expense of the characters, simply using people as a vehicle for jokes and nothing more.

But here’s a wild idea. What if there was a show that not only spanned the lives of one group of characters, but those of several generations after them as well? And in spite of this theoretically massive shift in setting, tone, and casting, what if it could still remain as funny as it ever was?

If you’re interested, read on. I may have just the show for you. 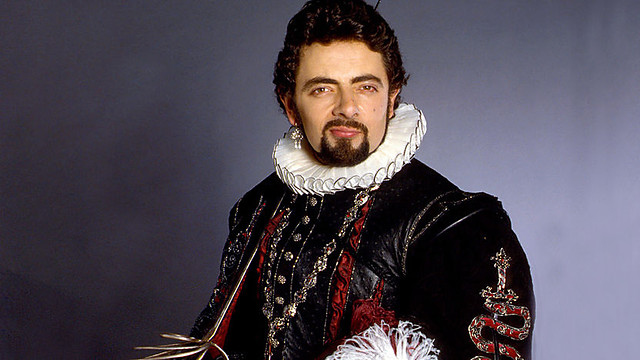 In 1983, the BBC debuted a strange and oddball sitcom called The Black Adder. The show starred British comic Rowan Atkinson–later to be best known for his characters Mr. Bean and Johnny English–as Prince Edmund, the Duke of Edinburgh, during an alternative-history reign of the fictional King Henry IV.

As a weak, cowardly, and not altogether bright man, Edmund is often forgotten and taken advantage of by his father, his brother, and other court nobles, which inspires him to create a dangerous new persona for himself as “The Black Adder.” Under this new and somewhat inaccurate banner, Edmund enlists his sidekicks, the atypically cunning peasant servant Baldrick (played by Tony Robinson) and the idiotic nobleman Lord Percy (Tim McInnerny) in his various schemes to improve his standing–or failing that, just to make a lot of money.

While he doesn’t really have that many redeeming qualities, what Edmund does have is a sense of modern perspective toward the various events of the Middle Ages period, in that he alone often recognizes how ridiculous they are and makes fun of them to anyone who will listen–which, granted, isn’t that many people. This element of the Black Adder’s character carries over into the series sequel, Blackadder II, in which Atkinson once again appears as Edmund Blackadder, Prince Edmund’s great-grandson, who has adopted his forefather’s self-imposed title as his surname. Blackadder, now a lord in Queen Elizabeth’s royal court during the 1500s, must contend with the Queen’s fickle moods and his rivals for her affections, all the while scheming to better his own personal situation. 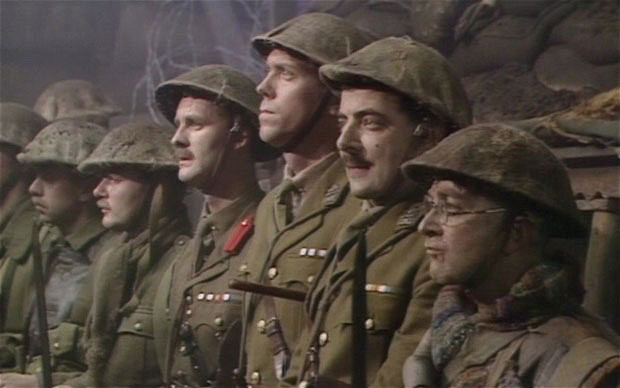 In this way, Black Adder acts as a sort of reverse character development, in that the characters themselves do not change overmuch, but the focus of humor is rather how each of the successive Blackadders adapt to whatever time period and social situation they find themselves in. Each Blackadder is also accompanied by a respective generation of the Baldrick family, always Blackadder’s servant and always played by Tony Robinson. With each generation, Blackadder’s intelligence is seen to increase notably, just as Baldrick’s street smarts decrease, and while both of their places in society grow lower and lower due to Blackadder’s unlucky streak and poor choices of company.

Other actors such as McInnerny, Stephen Fry, and Miranda Richardson also star in multiple series as similar versions of descended characters. The most notable recurring actor, outside Atkinson and Robinson, may be Hugh Laurie (yes, he did things before House) as a lineage of incompetent yet upbeat young aristocrats including George, the Prince of Wales and Blackadder’s master in Blackadder the Third and Lieutenant George, Blackadder’s right-hand man, in Blackadder Goes Forth. Half the fun of watching the show for me was seeing Laurie do the kinds of ludicrous comedy that Black Adder calls for. Having seen him do many more serious roles before, it never really occurred to me that he could be funny and get the kinds of laughs that he does during the series run.

The Blackadder character changes greatly between the first and second series, with Blackadder becoming a charming, handsome and skilled rogue rather than an unattractive weakling. What doesn’t change, though, is his outlook on life: through all his later incarnations, Blackadder remains cynical and self-centered, with a Machiavellian outlook and frequently criticizes “current events” such as the creation of the dictionary, Sir Walter Raleigh’s exploration of the New World, and the total futility of trench warfare.

Overall, the show takes a lot of cues from Monty Python-style humor, and is hysterically funny on a very consistent basis. Much of this comes from Blackadder’s formation of clever cons to advance himself, only for them to blow up in his face and force him into frantic damage control mode due to the stupidity of the people around him or just plain bad luck.

Black Adder struggles a bit to find itself during its first season, but improves greatly in the second and hits a magnificent stride in the third and fourth. Because of how short each series is, this makes it a relatively quick watch and overall a highly enjoyable experience. Let’s just say there’s a reason why this show was voted the second-best British sitcom and the 20th best TV show of all time.

Black Adder’s triumph is establishing a fascinating and funny anti-hero main character who makes you root for him in spite of his essentially unlikable nature, and while his various sidekicks may be boorish or dull, they too have traits that will slowly endear them to the viewer as well. I truly believe that this is a sort of comedy that will go down in history–possibly in more ways than one.