Welcome to another edition of Channel Chaser! Today I’m planning on marking down another first for this column: my first time talking about an animated show.

Cartoons, both those meant for kids as well as some aimed at more mature audiences, have been growing in popularity for a long time–just look at cult classics like Family Guy, South Park, and similar shows to see how large an impact they have made on our culture. Oddly enough, the show I want to bring up today gets a lot of its humor from culture itself, and that is FX’s spy-themed series Archer. 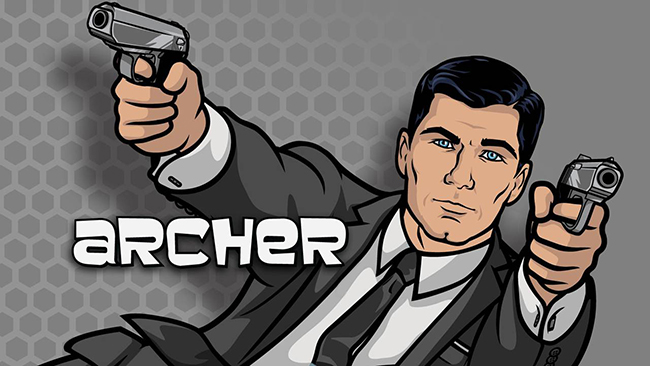 The way I like to describe Archer to people who don’t know anything about it is that it’s essentially Get Smart, but with X-rated humor, and honestly I feel this is pretty accurate. The main character, super-spy Sterling Archer, shares a lot in common with Maxwell Smart, including general incompetence, an abundance of dumb luck, and a tendency to be easily sidetracked, among other things. Similarly, Archer’s agency, a government entity known as ISIS, is plagued by an overabundance of bureaucracy and a critical lack of responsibility and common sense, much like Smart’s CONTROL.

The truth is, I often wonder why Archer’s story is delivered through the medium of animation. While it does add to the level of visual interest a bit and can help lessen the ludicrous nature of the situations the characters find themselves in, I can’t help but think that if the show was a live action one rather than a cartoon, it might be even more entertaining for the audience. It certainly doesn’t seem to be a show like South Park, where it would probably not exist if not for animation. Still, I suppose it might be difficult on the budget given all the rather “explosive” predicaments that happen in the show.

One thing I have noticed about Archer is that, to a certain degree, it does set itself apart from other animated shows. Similar programs like Family Guy and South Park seem to use a lot of the same tactics to satirize social situations or elements of popular culture, but I find that other shows often focus on situational humor to the detriment of the characters. In other words, most of the things that are funny in South Park and Family Guy are the situations the characters are placed in, leading them to react in predictably awful, but humorous, ways. Their essential nature as characters never really changes.

Archer, on the other hand, does a much better job of seeking to develop characters just as much as story. Actually, there’s not a whole lot of story going on in Archer, and most episodes can stand more or less on their own aside from some minor recurring characters and passing references to past episodes (that’s excluding the latest season). It helps that the show has a fantastic cast of voice actors, with solid contributions from comedy vets like H. Jon Benjamin, Judy Greer, Chris Parnell, Aisha Tyler, and Jessica Walter. Whenever I watch Bob’s Burgers now I find myself deeply disturbed at how the manly, sophisticated voice of the well-dressed badass Archer can possibly come out of the mouth of Bob Belcher, a slovenly short-order cook (Benjamin voices both roles). I suppose some characters just define a person, regardless of their other work.

Archer’s humor is a strange blend of sitcom, black comedy, pop culture references, and wildly inappropriate sexual innuendos that, bizarrely, seem to flow together perfectly. I can’t describe just how funny it can get when the characters go off on a tangent from the task at hand to finish a petty, stupid argument over some issue of semantics or cultural debate. Any fan of the show will know what I mean when I say that the show unapologetically breaches the comedy “danger zone” with a frequency that both astounds and disgusts me, but also gives me no end of enjoyment.

What makes it even more interesting is that, while Archer draws somewhat on pop culture for humor, many of the jokes are self-referential, giving the show an air of confidence and pride in itself that is instantly appealing and bringing attention away from things that don’t make sense.

Part of Archer’s charm is that the characters seem to be just as baffled as the viewers by the inconsistencies and ludicrous situations they have to deal with, and often break the fourth wall through offhand, one-line comments. For example, when confronted in one episode with the fact that certain elements in the show, such as technology and espionage methods, are hopelessly anachronistic and do not firmly anchor the show in any particular era, Archer angrily demands, “Yeah. What year even is this?”

In the words of series creator Adam Reed, Archer started as an attempt to portray stereotypical spies like James Bond as they really were, stripping away the bravado and glamour of their heroics to reveal that underneath, they are actually just chauvinistic, reckless alcoholics on a power trip, and I like to think Archer has stuck to this pretty well. The latest season, Archer Vice, may be a bit of a detour from the norm, but the show is still in fine form; although I am looking forward to the next one where producers have promised the original spy format will return. I can’t wait to see the ISIS gang back doing the thing only they can do…badly. Should be a lot of laughs left to have.